‘We live among wolves, and we welcome them’: US base in Germany also serves as wolf habitat 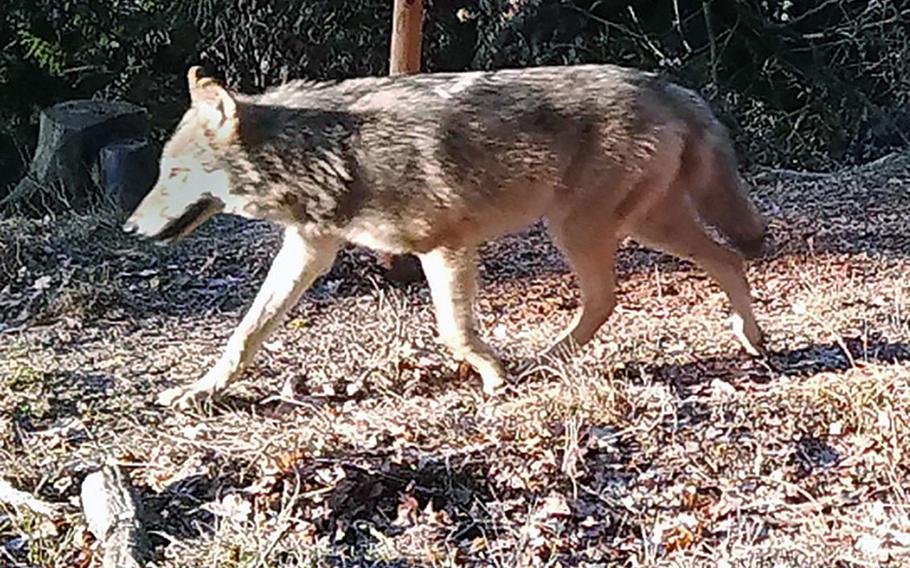 A wolf caught on camera at the Grafenwoehr Training Area in Germany, in February 2019. (U.S. Army)

GRAFENWOEHR, Germany — Who's afraid of big, bad wolves? If you’re one of the soldiers stationed at the Grafenwoehr Training Area, you might want to keep an eye out for them. But if you practice common sense, you don’t need to be afraid of them.

The Army recently issued a warning to stay clear of wolves on the training area, especially now, during the wolf mating season.

At least one pair of the animals — a protected species under German law — are known to live in the woods on base. However, there are no known wolf pups yet.

“We live among wolves, and we welcome them,” Army spokesman Nathan Van Schaik said.

The warning reminds people that the animals have historically shared this area peacefully with humans, but asks locals not to leave cats or dogs outside and not to feed the wolves.

The pristine condition of the forests on base is possibly why the wolves have chosen this area to live, the military said.

“That endangered wolves would choose our training areas as a habitat is testament to how hard we work to protect the environment,” Van Schaik said. “Additionally, we openly and aggressively inform our community members of validated wolf sightings to ensure everyone’s safety.”

The vast areas between live-fire ranges give the wolves room to roam the woods and hunt for food, said Stefan Haertl, an environmental engineer on base.

“Wolves need enough to eat and a retreat area; both available in abundance at (the Grafenwoehr Training Area),” he said. “Thousands of red deer, roe deer, wild boar, hare and beaver make up an excellent food source.

“The vast impact areas and surface danger zones between the ranges provide lots of undisturbed places to stay for rest or for digging a (litter) den. Active and former military training areas have been the stepping stones for the spread of wolves all over Germany.”

The pair of wolves have lived on base since 2016. There have been no reports of attacks.

Wolves were exterminated in Germany during the 19th century. But in the 1990s, new European laws protecting wildlife and habitat set the stage for their recovery. Military bases — both active and abandoned — have played a central role in helping the animals reclaim habitat, said a report in February by Lupus, the German Institute for Wolf Monitoring and Research.

It said there are 73 packs of wolves spread through seven of Germany’s 16 federal states, and their numbers are rising.