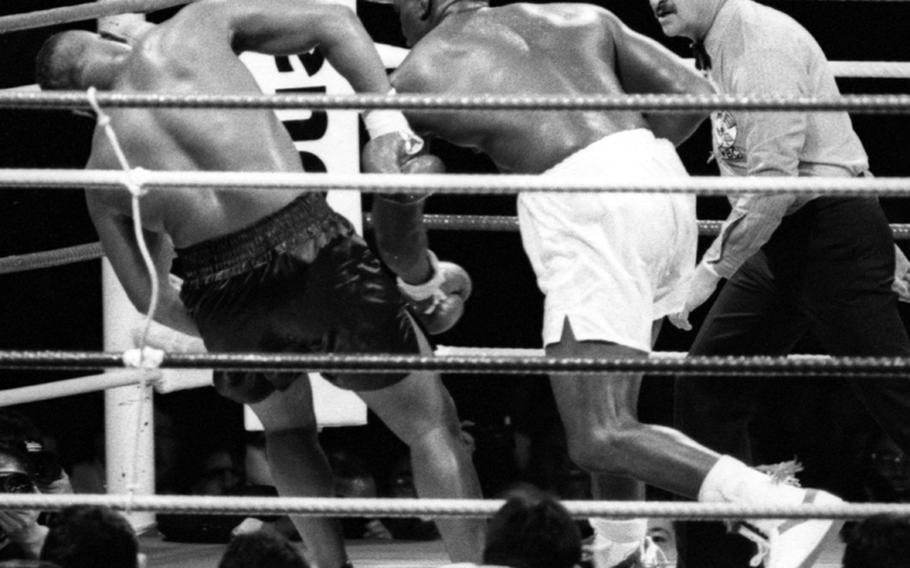 Buy Photo
James "Buster" Douglas finishes off Mike Tyson in the 10th round of their fight at the Tokyo Dome. (Dennis Rogers/Stars and Stripes)

Buy Photo
James "Buster" Douglas finishes off Mike Tyson in the 10th round of their fight at the Tokyo Dome. (Dennis Rogers/Stars and Stripes) 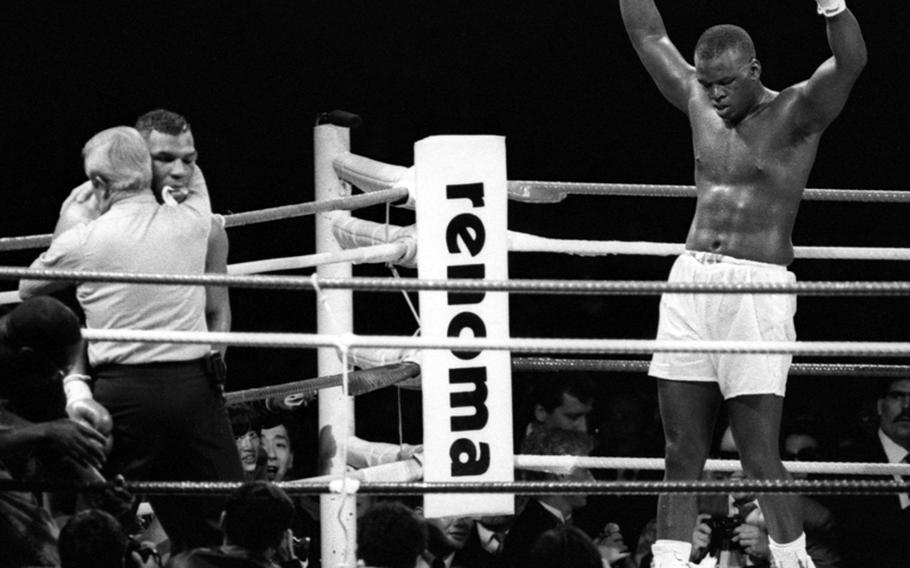 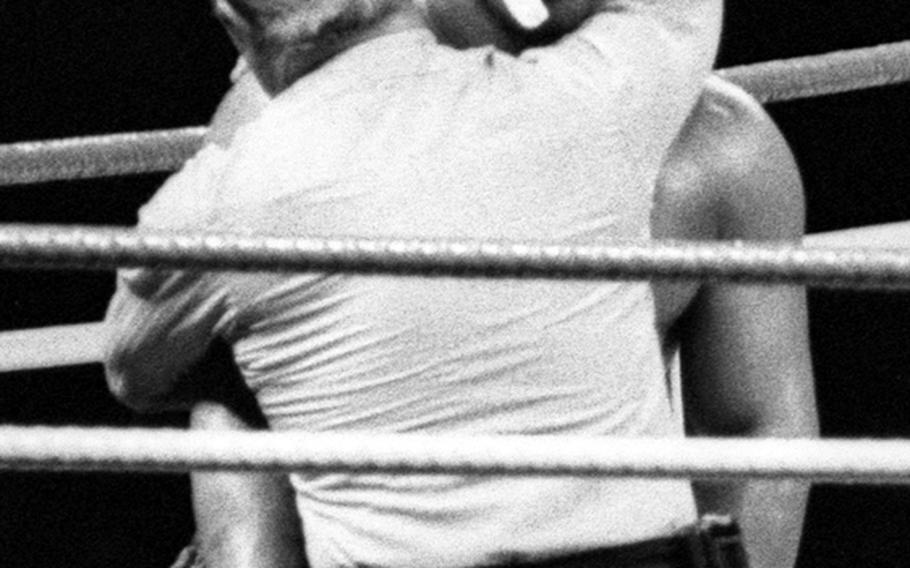 Buy Photo
His mouthpiece hanging askew, a stunned Mike Tyson is held up by Octavio Meyran after the fight. (Dennis Rogers/Stars and Stripes)

TOKYO &mdash; James "Buster" Douglas dropped twilight at noon on world heavyweight champion Mike Tyson Sunday, only to have his 10th-round knockout victory declared invalid because of what boxing officials called a referee's mistake while Douglas was down in the eighth.

Was Douglas the new champ? It appeared so to an astonished crowd at Tokyo Dome and millions more who watched a stunning upset beamed worldwide by satellite TV.

Dusk fell on Tyson with a left that landed with the velocity of a sunset gun, sending the champion down in his own corner. In a groveling stupor, he made feeble efforts to rise as referee Octavio Meyran spread hands over him to signal the knockout at 1:23 of the round.

Then Tyson, his face like a dented harlequin's mask, stumbled up and fell in Meyran's arms, his mouthpiece twisted grotesquely out of his mouth.

But Tyson had put Douglas down two rounds earlier and there were loud and immediate protests that Meyran was three seconds behind the timekeeper's count, giving the dazed Douglas precious time to recover.

Sunday night, hours after Douglas left the Big Egg with what he thought was title in hand, World Boxing Council President Jose Sulaiman summoned journalists back to the Dome and said he was "withholding recognition of today's decision" &mdash; meaning the title was suspended and neither fighter was champion.

"No one (neither Tyson nor Douglas) until the 20th of February, when the. World Boxing Council meets," Sulaiman said.

World Boxing Association President Gilberto Mendoza nodded along with Sulaiman, saying the WBA and WBC will decide jointly what should be done. Sulaiman said that one of several different options could be announced in a week to 10 days &mdash; not saying what any of these might be.

The problem, Sulaiman said, was this: when Douglas went down, Meyran began counting from one when the timekeeper had actually reached four. Also, Sulaiman said, the referee briefly stalled the count while Tyson was still in a neutral corner.

By the time Douglas got to his feet at nine, Sulaiman said, 13 seconds had gone by.

"We have a 13-second KO in the eighth round and another KO in the 10th round," Sulaiman said &mdash; adding that a rematch between the two is "absolutely mandatory."

"I'm sure Mike and Douglas want to meet again and prove once and for all who is best," Sulaiman said.

Meyran admitted it &mdash; appeared before reporters to say he made a "hundred percent human mistake."

TYSON SAT WITH THE TWO officials and promoter Don King, wearing dark glasses to cover a swollen eye and holding what appeared to be a damp towel to his lumpy face.

Recalling that round, Tyson said he thought he hit Douglas with "pretty decent shot.

"And I thought the referee had counted him out and the fight was over. Then the referee waved us on."

As Tyson stoked his fists for the finish, the bell rang &mdash; depriving him of his best and only chance. Tyson said he believed himself still champion. "Absolutely, yes."

Tapes of the knockdown were replayed as what the officials called evidence of a late, long count. It appeared to the watching reporters that Meyran started counting as soon as Douglas was down and they expressed loud and open doubt of the commission claims.

"Only in America," somebody shouted, King's tagline extolling himself for wealthy, up-from-success. King did not smile.

Nobody at ringside in the Dome saw Douglas' demolition of Tyson as a chance, out-of-nowhere punch. Tyson, outfought and outfoxed all the way, was set .up by two left-right combinations that stifled his senses and made him easy game for the finisher.

It upset everybody &mdash; Tyson, disbelieving fans and King, who watched timbers cave in on the goldmine bout Tyson was to have fought with Evander Holyfield in June. A spokesman for Don King Productions refused to confirm reports that his boss complained about the count and started the hassle that led to withdrawal of recognition for Douglas.

HOLYFIELD, WATCHING the fight at ringside, insisted he was surprised but not that unhappy &mdash; although, if he fought Douglas, he'd make far less than the reckoned shortend of 15 million he'd have earned boxing Tyson.

"I've always told people my goal was to be the heavyweight champion of the world, not just to fight one guy for the money."

John Johnson, Douglas' manager, said he planned to talk with billionaire Donald Trump, who had put in the winning bid for a title match between Tyson and Holyfield &mdash; presumably to discuss putting Douglas in there instead.

This was before Sulaiman and Mendoza announced the in-doubt decision. Nobody from Douglas' camp showed up officially &mdash; only lawyer Steve Enz, who would not announce himself or participate in any discussion. Enz did not say what action his client might take.

Tyson, who had been reckoned an easy two-round winner over a gangling veteran six years older than the 23-year-old champion, wasn't in it &mdash; not at all.

Iron Mike broke in the crucible, fissured apart by an opponent who stood a head taller and pressured him with jolting, jet-piston jabs and straight, punishing shots that were swifter than Tyson's wide hooks.

The pattern of the fight was told in the first round. Tyson rushed in with looping smashes, headhunting instead of going for Douglas' long torso. Most went over the challenger's shoulder or around his head, and Douglas stung back with long, sniper-bullet counters. Fast, short rights pounded at the champion's jaw and his left eye.

Douglas' snapping left began to close the swollen eye, puffing it into a muffin-sized lump.

Tyson attacked all the way, but his lunges looked desperate instead of measured. He could seldom get past a roadblock of elbow and forearm raised by the clever Douglas &mdash; not with anything but an occasional smash or single hook, nothing Douglas couldn't shake off as he moved on. Douglas shook Tyson with a stiff inside uppercut in the second, and a hard left-right raised jets of sweat.

When Tyson landed, he hurt. But he didn't land often enough and many of his best efforts were smothered by Douglas' proficient boxing and good inside work. As they traded rights in the third, Douglas looked pained. So did Tyson as another fast Douglas combination landed.

But Tyson smashed back with a left hook and right cross to take that round &mdash; one of three he won on the Pacific Stars and Stripes card.

Tyson began to hold and maul, obviously hoping to wear Douglas down with brutish power. Douglas pulled free and kept punching &mdash; those long, stay-away combinations that stopped one Tyson offensive after another..

First Tyson slammed in a long right and a mean inside left. Douglas took it, wobbling slightly, and then showed how a superbly conditioned fighter can recover. His right-left counterfire thumped in &mdash; and it was Tyson who came out of the exchange loose and groggy, taking another left and right that threw him on the ropes. Tyson looked wilted then ready to fall.

Was this it the demise of undefeated Mike? Not yet. Douglas rushed in, too anxiously, and an ambush Tyson uppercut struck like the head of a hidden adder.

Douglas down on his back hard.

In the ninth, Tyson fought on sluggish instinct, numb and stolid as he walked into everything Douglas fired &mdash; flatfooted, obviously looking for that one turn-of-tide shot. It wasn't there &mdash; not as Douglas finished a clever and intelligent fight, gray matter against brute force, and put the quietus on Tyson in the 10th.

Tyson made slightly over $6 million, $3 million short of the "ballpark" figure King had forecast earlier. Douglas earned $1.3 million, winning his 30th fight against four losses and a draw. It was his 20th knockout.

Tyson suffered his first loss in 37 fights as a professional, 33 of those knockouts.