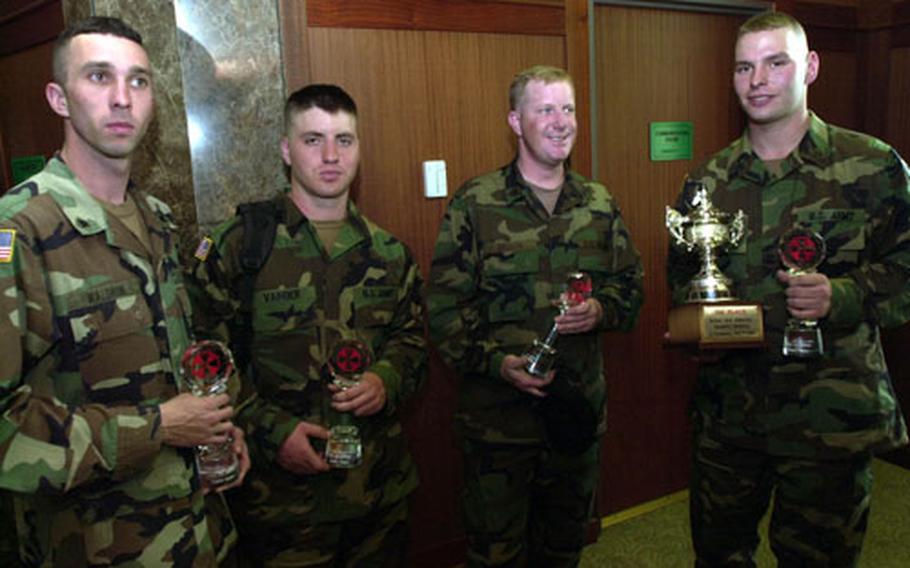 YONGSAN GARRISON, South Korea &#8212; Soldiers from three units were recognized for excellence Friday in a competition that tested their skills at purifying water.

&#8220;It feels outstanding,&#8221; said Pfc. Andrew Mach-Miller, holding a solid glass trophy after he and others were recognized during 8th Army&#8217;s Friday staff call.

The soldiers will compete with other units at the Department of the Army level, titled the Sgt. Maj. John C. Marigliano Award of Excellence competition. It&#8217;s scheduled for June 13 at Fort Story, Va. The competition is in its seventh year.

The competition consisted of searching for viable water sites, setting up equipment and then making clean water. Different lanes were set up to test different skills; soldiers also had to take a written test on water purification.

The water purification units have performed real-world missions in South Korea. The 305th Quartermaster Company extracted floodwaters from both the Moyer Recreation and Bowling Center at Yongsan Garrison last July during flooding caused by Typhoon Maemi.