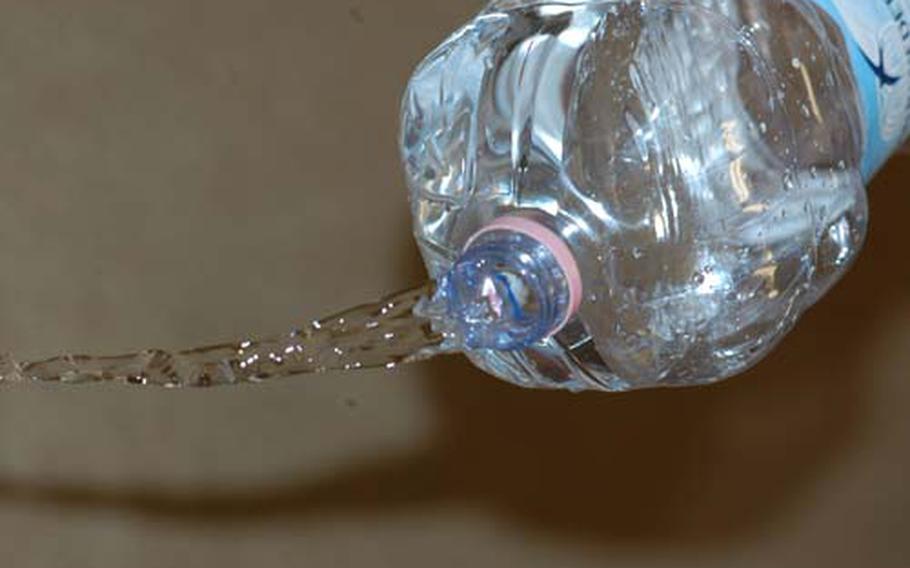 The Navy Exchange Command recently purchased more than 300,000 liters of bottled water to be distributed to off-base residents in Naples, Italy. But the Navy must get the OK from the secretary of the Navy to purchase the water from the NEX before distribution will begin. (Photo illustration by Lisa Nova/ S&S)

NAPLES, Italy &#8212; The Navy must first get an OK from Secretary of the Navy Donald Winter before it can start handing out bottled drinking water to servicemembers and employees living off base in Naples, officials said Thursday.

But, the secretary&#8217;s office has yet to even receive a request to approve the plan, according to a spokesman from the Navy&#8217;s Chief of Information office.

A preliminary plan by Navy officials in Naples indicated distribution of bottled water was to have started Aug. 22, according to information obtained by Stars and Stripes. The plan called for military and civilian personnel living on the local economy to receive five liters of water per day, stating that bottled water was mandatory for homes where bacteria levels exceeded permissible levels.

The information also stated that Italian officials weren&#8217;t responsive to or interested in the Navy&#8217;s soil and water sampling efforts, and that some landlords were not responsive to correcting problems with contaminated water in the homes they rent to servicemembers and civilians.

A Navy Exchange official in Naples said that the command expected to begin distributing the water this past week. But Navy officials said that information was incorrect, and that "no decisions had been made" as of Friday, according to said Lt. Cmdr. Wendy Snyder, spokeswoman for Navy Region Europe.

Even though Winter has yet to approve the plan, the Naples NEX has ordered more than 311,000 liters of bottled drinking water.

"The Navy Exchange was being proactive in the event that a decision was made to distribute water to our personnel who live off base," Snyder said. "If the program does not work out, it&#8217;s no loss to the NEX because they will sell the water anyway at the NEX, Mini-mart, Commissary etc&#8230;"

The amount ordered is four times greater than what the NEX normally orders, Snyder added.

Navy Exchange Command public affairs officials in Virginia declined to answer any questions, or provide a copy of the purchase order, saying only "it would be inappropriate for the NEX or NEXCOM to comment at this time," and referred all questions back to Navy Region Europe, as did the Navy&#8217;s Chief of Information office.

The Navy is using U.S. environmental company TetraTech to collect water and soil samples from homes, which are then sent to a German laboratory for analysis.

Following a recent sampling of off-base residences, the Navy began advising those living off base to use bottled water because they may be exposed to contaminated water in their homes. The Navy currently is conducting a health assessment on air, soil and water quality because of concerns over the decades-long trash crisis in Naples.

"Since the water in about one-third of the (off-base) homes we tested had bacteria exceedences, leadership decided that bottled water would be a precautionary measure until the health assessment was completed," Snyder said last week.

Rear Adm. David Mercer, commander for Navy Region Europe, was not available for comment Friday, according to Snyder.

Naples officials gave no indication when they would send the request to Winter to approve the purchase of the water.