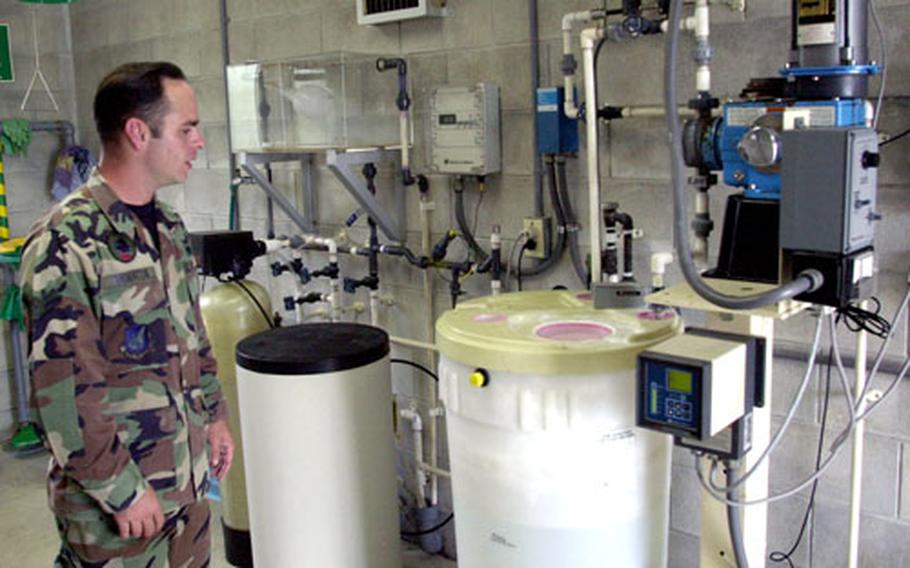 Airman Richard Thornton explains the fluoridation method used at a water station near Kadena Air Base’s Gate 2. The base stopped fluoridating water after it determined that the system design could not keep pace with water flow. A new system is expected to be ready in 2007. (Erik Slavin / S&S)

KADENA AIR BASE, Okinawa &#8212; Many young adults today have never encountered a dentist drill, and many health experts credit that achievement to fluoride.

Most Americans reap the fluoride&#8217;s cavity-fighting benefits without ever thinking about it &#8211; they get it every time tap water passes their lips.

But on Okinawa, servicemembers and their families don&#8217;t receive that protection.

Water fluoridation on Kadena Air Base was shut down this year after it was determined that a water system activated in 2003 cannot keep pace with municipal water flows to fluoridate water correctly, the Air Force&#8217;s top engineer said.

The only other island fluoridation facility is on Camp Lester, and that too has been shut down, a Marine spokesman said.

Children are especially vulnerable to cavities and other dental nightmares, but adults also should see a dentist for individualized looks at their diets.

A dentist can determine whether a fluoride supplement is a good idea, said Col. Thomas Marshall of Kadena&#8217;s 18th Wing Dental Squadron.

Even with brushing and flossing, constantly bathing teeth in sugar that way can wear down the protective layer of enamel on teeth and cause cavities or tooth loss, Marshall said.

Kadena Air Base officials are consulting with outside engineers on a new fluoridation system.

The system that went online in 2003 isn&#8217;t well-designed for fluoridation, Allen said.

Water enters Kadena Air Base at Gates 2 and 3, where the fluoridation stations are located.

Gate 3&#8217;s flow remains relatively steady because of light development surrounding that side of the base.

However, the flow through Gate 2 changes too quickly to fluoridate because of the high-density development surrounding Gate 2 Street.

The rush of water is too fast to keep fluoridation levels medically beneficial while keeping them within safe limits when water pressure falls, Allen said.

The new system will centralize water flow coming into base from Gates 2 and 3, allowing engineers to average the two supplies together well enough to maintain useful fluoridation levels, Allen said.

Until then, Kadena residents should ask their dentists before using fluoride supplements beyond toothpaste, Marshall said.

Too much fluoride can result in tooth discoloration, he said. &#8220;We (give) recommendations on a routine basis to let people know what&#8217;s available to them,&#8221; he said.

Japan generally does not fluoridate its water supply, and Okinawa is no exception. However, the traditional Japanese diet does not promote tooth decay the way that the average American diet does, dentists say.While most U.S. Forces Japan installations do not treat their municipal water, Misawa Air Base fluoridates water on its main base and north area with sodium fluoride, at a cost of about $6,500 per year, according to Maj. Monte Harner of the 35th Civil Engineer Squadron.In the United States, studies show that water fluoridation can reduce the amount of cavities children get in their baby teeth by as much as 60 percent; and can reduce tooth decay in permanent adult teeth by nearly 35 percent, according to the American Dental Association&#8217;s Fluoridation Facts on its Web site.About 62 percent of the U.S. water supply is fluoridated, according to the American Dental Association.The Safe Water Drinking Act prevents United States facilities from raising fluoride levels beyond 1.2 milligrams per liter; however, anything less than 0.7 milligrams per liter provides minimal benefit.There are many Web sites and some scientists that oppose fluoridation, because the fluoride used in many U.S. water supplies is actually fluorosilicic acid, an industrial byproduct. However, the vast majority of studies conducted during the past 50 years have concluded no adverse effects from fluoridation, according to the American Dental Association.&#8212; Erik Slavin