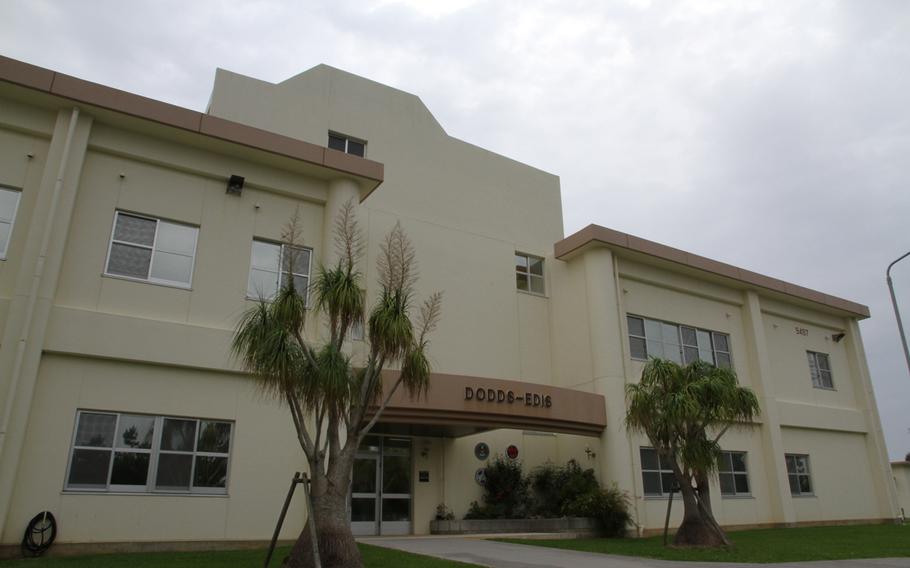 Buy Photo
The Air Force has disconnected water fountains at Building 9497, a Defense Department school administration building on Kadena Air Base, after determining the fountains were once again being used, even though traces of lead had been detected in the water during an inspection more than 10 years ago. (Matthew M. Burke/Stars and Stripes)

CAMP FOSTER, Okinawa — The Air Force has disconnected water fountains at a Defense Department school administration building on Kadena Air Base after determining the fountains were once again being used even though traces of lead had been detected in the water during an inspection more than 10 years ago.

The contamination was discovered in second-floor fountains in Building 9497 in April during Lead Assessment Program testing, which is designed to reduce the potential health risks of lead consumption at schools and child care centers, according to an Air Force statement.

The Department of Defense Education Activity uses the building to screen children for developmental issues.

Officials said the contamination was first discovered sometime after Building 9497 was opened in 2002.

At the time, signs were erected to warn the building’s 30 Defense Department school employees, 26 Educational and Developmental Intervention Services hospital personnel and approximately 1,000 annual visitors. However, sometime after 2010, the signs were removed as the fountains had been turned off.

A recent inspection of the facility revealed that not only were the fountains turned back on, but the warning signs were not put back up.

Air Force officials were not able to say how long the fountains had been operating without the posted warnings.

There have been no reported illnesses due to the contamination, and the levels are not believed to have posed a significant health risk, officials said.

Lead poisoning is cumulative in the blood and poses a significant risk to children and expectant mothers, even at low levels. There are no safe levels of lead in drinking water, according to the Environmental Protection Agency.

Air Force officials said that the employees at the building were put at the greatest risk. Of the approximately 1,000 annual children screened at the building, 75 percent only visit the facility once, and the screenings take place primarily on the first floor. Any medical treatment is provided at a separate facility, and bottled water is available at Building 9497 as well.

“Current individuals who work in this building will be contacted to complete an occupational health risk assessment,” 18th Wing spokeswoman Tech Sgt. Amanda Savannah said in a written statement. “Also, those with health concerns related to this issue can contact their primary care provider to arrange an individual consultation… There currently are no [other] water fountains at Kadena schools, youth centers or child development centers with sample results above the LAP standard.”

The Air Force surveillance standard for mitigation at any facility with programs for school age children is any sample that exceeds 20 parts per billion. The second floor fountains at Building 9497 were tested at 21.6 parts per billion in March.

The cause of the contamination remains unclear, Savannah said. Facilities built prior to 1986 are more likely to have fixtures, pipes and solder that could contribute to elevated levels of lead in the drinking water. The most common culprit of lead in the water comes from brass or chrome-plated brass faucets and fixtures.

Last year, similar issues with lead were discovered at child care development centers on Camp Foster and Camp Courtney, Marine Corps officials said this week. However, none of these faucets and fountains were being used for drinking water and they were secured from use.

Anyone with questions or concerns is asked to email Kadena Air Base’s public health representatives at nhoki-jpeach@med.navy.mil.