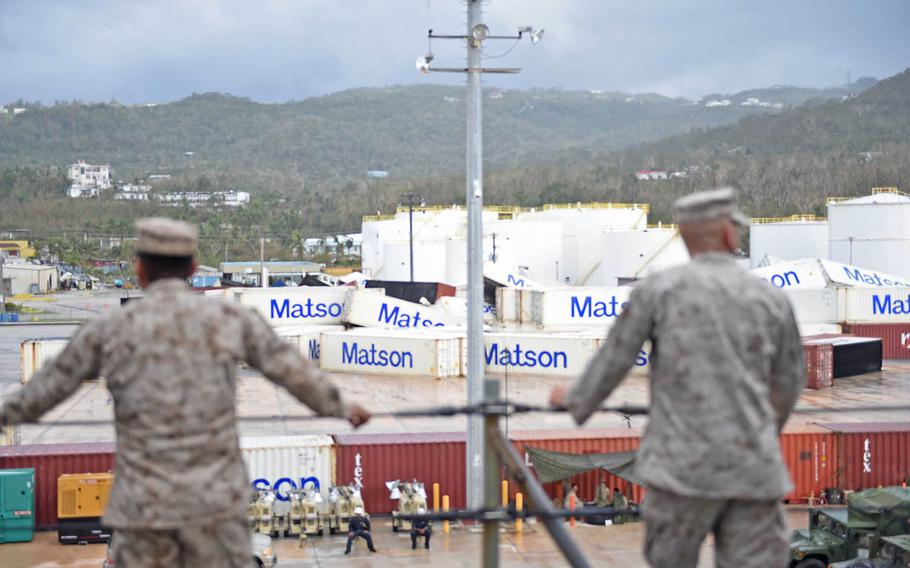 Marines from the 31st Marine Expeditionary Unit survey damage caused by Typhoon Soudelor while aboard the USS Ashland on Aug. 8, 2015. Sailors and Marines continue to provide aid to the U.S. commonwealth island, which remains without power. (Courtesy of the U.S. Navy)

Marines from the 31st Marine Expeditionary Unit survey damage caused by Typhoon Soudelor while aboard the USS Ashland on Aug. 8, 2015. Sailors and Marines continue to provide aid to the U.S. commonwealth island, which remains without power. (Courtesy of the U.S. Navy) The remnants of a home on Saipan. It's one of many destroyed when Typhoon Soudelor struck the U.S. commonwealth island on Aug. 3, 2015. (Courtesy of United 4 Saipan/Facebook) Amphibious assault vehicles from the 31st Marine Expeditionary Unit arrive on Guam on Aug. 10, 2015, and prepare to board the USS Ashland for disaster relief efforts in Saipan. (Courtesy of the U.S. Navy) 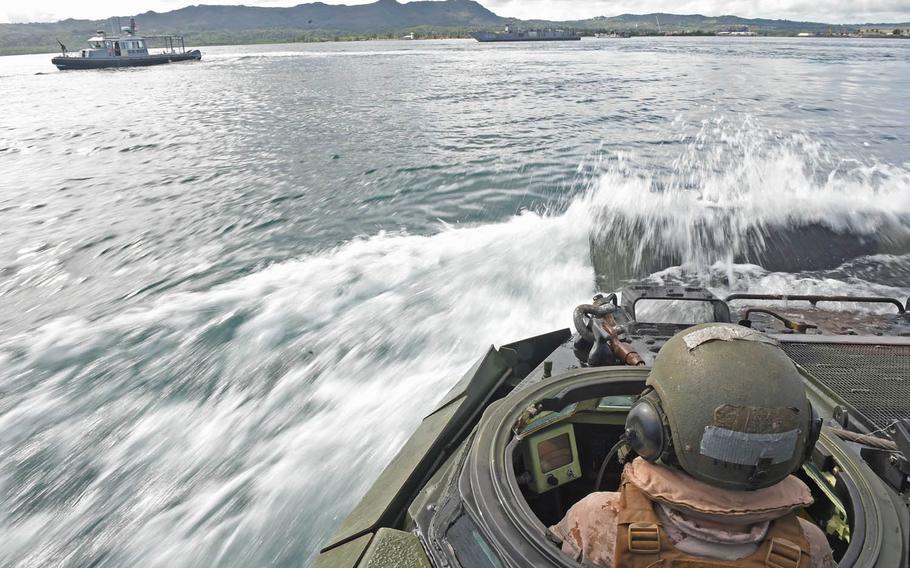 Amphibious assault vehicles from the 31st Marine Expeditionary Unit head ashore to Guam's Reserve Craft Beach on Aug. 10, 2015. They would later embark on the USS Ashland as part of typhoon relief efforts for Saipan. (Courtesy of the U.S. Navy) A street scene on the U.S. commonwealth island of Saipan, which sustained heavy damage after Typhoon Soudelor struck on Aug. 3, 2015. (Courtesy of United 4 Saipan/Facebook)

TOKYO — The military is doing its part to aid typhoon-ravaged Saipan, but residents of the U.S. commonwealth island say they remain a long way from recovery.

No deaths have been reported, but the island’s main hospital is relying on backup generators as it treats storm-related injuries and other patients.

Damages to homes and businesses will likely add up to millions of dollars, but an accurate assessment right now isn’t possible, said officials with the Commonwealth of the Northern Mariana Islands, which includes Saipan and smaller islands in the area.

More than 2,000 residents have registered for federal emergency assistance, said Luis John Castro, a spokesman with the governor’s office.

After nine days, residents in online forums say gas lines, access to water and other necessities are improving, but frustration remains at the pace of relief.

“So many houses have been completely destroyed,” Harry Blalock, a Saipan resident for 19 years, told Stars and Stripes by phone. “Roofs are gone, just blown away. It’s a level of destruction I’ve never seen before.”

More than 100 utility poles were knocked over, split or snapped like matchsticks, government officials said. While restarting electricity transmission to the hospital is a top priority, there is no timetable for power restoration to the whole island, Castro said.

Water lines are generally inoperative, though access has been intermittently restored to some areas, sometimes for an hour or two.

“For so many people, it’s been a week and they haven’t had a shower,” said Blalock, who runs a local dive shop popular with military personnel.

Water became an immediate concern during the first few days, with private individuals banding together in some areas to provide to the less fortunate, Blalock added.

Days after the storm, residents on Saipan waited six hours in line for gas, which was being rationed at $20 per vehicle, at $4.20 per gallon. The rationing policy has since been lifted and lines were down to 30 minutes at some stores on Tuesday, according to multiple residents.

The many military and peace memorials on Saipan were spared major damage, Castro said. In 1944, tens of thousands of people died in the Battle of Saipan as the U.S. captured the island from the Japanese.

Today, the military’s presence on the island is limited to a small Army Reserve base and some recruiting offices. However, thousands of servicemembers are stationed 90 miles away in Guam, and many more are stationed in Japan, which is about a three-hour flight away.

The Sasebo, Japan-based USS Ashland arrived in Saipan on Aug. 8 with 21,000 gallons of drinking water and other relief supplies, according to Navy statements.

Marines with the Okinawa-based 31st Marine Expeditionary Unit have been taking the water and supplies to local distribution centers. The Marines have also set up a desalinization plant in Garapan, the island’s main village.

However, communications and logistical problems have hampered some aid distribution. Hundreds of people showed up at a community center beginning at 3 a.m., and eventually left frustrated after rumors of a food stamp distribution proved false, according to the Marianas Variety newspaper.

Many more people turned up at American Memorial Park in Garapan on Sunday and waited much of the day for water and Meals, Ready to Eat that never arrived because of a truck’s mechanical problems.

“We were able to get to the other sites without any difficulty,” Castro said.

Saipan also faces economic difficulties as it works to restore its critical tourism sector. Damage to the runway lighting system at Saipan’s international airport has forced the cancellation of all night flights, many of which bring tourists from Asia.

Although resort hotels remain open, many businesses are not. Stars and Stripes called six well-regarded restaurants at 5 p.m. Saipan time, and none answered the phone.

Saipan’s recovery may also have implications on the military’s realignment of forces in the Asia-Pacific region. The Pentagon wants to place live-fire training ranges on the islands of Pagan and Tinian, a few miles from Saipan.

The plan has drawn opposition from residents concerned about noise and environmental damage. Local news outlets reported that the CNMI government will ask for a third extension on its response to the Pentagon’s draft environmental impact statement.

“Definitely the situation with military has been a very big issue throughout the year,” Castro said. “However, the governor’s focus right now is trying to get the islands back to normal.

“Everyone is still trying to do their best to keep moving forward — it’s the only thing we can do in a situation like this,” he said.