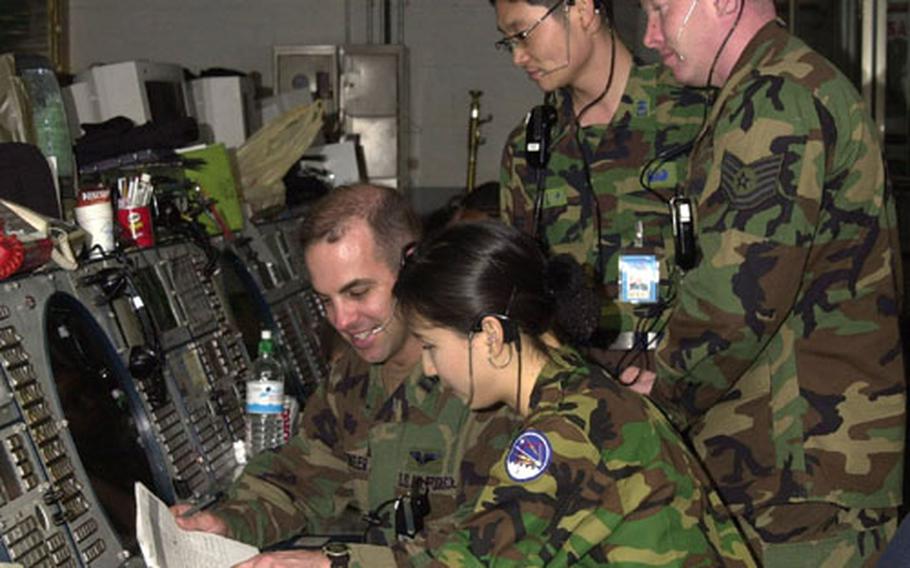 Members of the Republic of Korea Air Force&#39;s 30th Air Defense and Control Wing work with their USAF counterparts inside a hardened facility at Osan Air Base, monitoring the skies over South Korea. (Courtesy of USAF)

OSAN AIR BASE, South Korea &#8212; When South Koreans woke to a new day Friday, they went about their usual chores, seeing the kids off to school, heading into work.

No news bulletins reported overnight military incidents between their country and North Korea. It was the start of a routine day in the &#8220;Land of the Morning Calm.&#8221;

But while they slept the night before, members of their country&#8217;s Air Force had been at work in a hardened shelter at this air base 48 miles south of the Demilitarized Zone, keeping close watch on the blips of light that pulsed across their radar scopes.

They were in the 30th Air Defense Control Wing, a South Korean Air Force unit also known as the &#8220;Watchmen of the Korean Skies.&#8221;

Their job is to spot any hostile aircraft or missile that might be headed into South Korean airspace, a task they do in close coordination with their U.S. Air Force counterparts here.

Had the Watchmen spotted such a threat, their duty would have been to flash the word to the military commanders, South Korean and American, who&#8217;d decide what action to take next.

Radar scopes are &#8220;closely watched by Koreans and Americans to look at the various international boundaries for early warning and surveillance,&#8221; Montgomery said.

The Watchmen also share day-to-day air traffic control duties with their U.S. Air Force 621st Air Control Squadron, helping to direct military aircraft across the skies over South Korea. The wing does its watching through fixed and mobile ground radar stations. It also can receive reports of air threats from South Korean and U.S. military aircraft that cruise the skies, their radar watching for threats.

They&#8217;d relay that information to the Watchmen at work in the base&#8217;s MCRC, or Main Control and Reporting Center, a large hardened shelter.

They in turn would report the sighting to the Air Component Command here, whose leadership would decide what to do next. &#8220;The air component commander will fuse all the information he gets to make decisions regarding the defense of the peninsula,&#8221; Montgomery said.