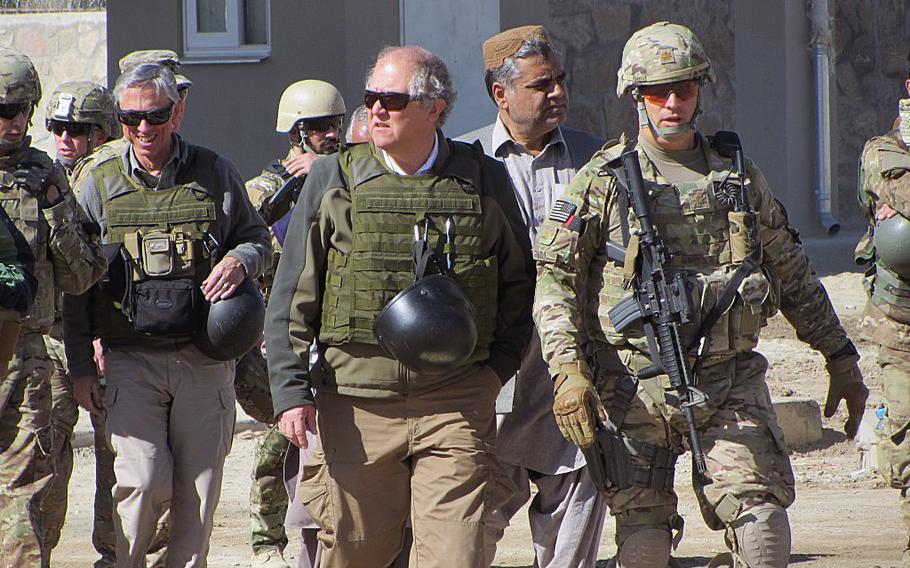 In this file photo, John Sopko, Special Inspector General for Afghanistan Reconstruction, center, tours facilities in Afghanistan. Sopko on Wednesday harshly criticized the lack of progress in the two years since NATO ended its combat mission, expressing the hope that his agency’s assessment would help guide White House and congressional policymaking in the coming year. (Special Inspector General for Afghanistan Reconstruction)

KABUL, Afghanistan — Less than two weeks before President-elect Donald Trump takes office, the watchdog for U.S. reconstruction efforts in Afghanistan delivered a searing indictment of the lack of progress in the two years since NATO ended its combat mission and assumed a new advisory role designed to get the country strong enough to stand on its own.

“As much as I wish I could say much has improved in Afghanistan over the last two years, I cannot,” Special Inspector General for the Reconstruction of Afghanistan John Sopko said Wednesday in prepared remarks for a speech at a Washington-based think tank.

Sopko spelled out a series of problems, any one of which, he said, could “fatally undermine” U.S. efforts to rebuild Afghanistan: shortcomings of Afghan security forces, corruption among Afghan officials, the thriving narcotics trade and U.S. agencies’ poor oversight of their expenditures.

The remarks were aimed at the incoming Trump administration. Sopko said that he did not know what direction the new administration would take in Afghanistan but that he hoped his agency’s assessment would help guide White House and congressional policymaking in the coming year.

The speech coincided with the release of a SIGAR report that identifies the greatest threats to Afghan’s successful reconstruction.

Since 2002, Congress has signed off on more than $155 billion to rebuild the country, the report said. That’s the most the United States has paid for any country’s reconstruction in history.

“Despite this enormous expenditure, the reconstruction effort remains tenuous and incomplete,” the report said.

Underlying the country’s many challenges were two main factors: the “questionable capabilities” of the country’s security forces and “pervasive corruption.”

The report offered a negative assessment of Afghan military and police performance in last year’s fighting against insurgents, in which security forces struggled to contain Taliban gains.

“This is a reportedly 320,000 strong force, and it’s basically playing whack-a-mole following the Taliban around Afghanistan,” Sopko said Wednesday.

The insurgents number about 25,000 fighters, according to military estimates.

The government forces, Sopko said, are plagued by poor leadership, which leads some officers to bolster their ranks with “ghost soldiers” whose salaries they pocket; others sell equipment and fuel to the Taliban.

In speaking to the Center for Strategic and International Studies, Sopko quoted former Afghanistan NATO chief Gen. John Allen as saying that “corruption — not the Taliban — (is) the existential threat to Afghanistan.”

Sopko noted that Transparency International had ranked Afghanistan the third-most corrupt nation in the world.

He laid part of the blame for that with the way outside nations such as the United States poured money into the country.

“The U.S. contributed mightily to the problem by dumping too much money, too fast, into too small an economy, with too little oversight,” Sopko said.

He also called out the “bleeding ulcer” of the narcotics trade. The U.S. has “little to show” for the $8.5 billion it has spent on counternarcotics efforts, he said. Afghanistan still leads the world in opium production and is growing poppy at “near record levels,” he said.

U.S. officials estimate that the Taliban get 60 percent of their revenues from the drug trade, which threatens to undermine gains on women’s issues, health, education, rule of law and governance.

Congress created SIGAR in 2008 to independently verify that U.S. reconstruction funds were being spent appropriately.