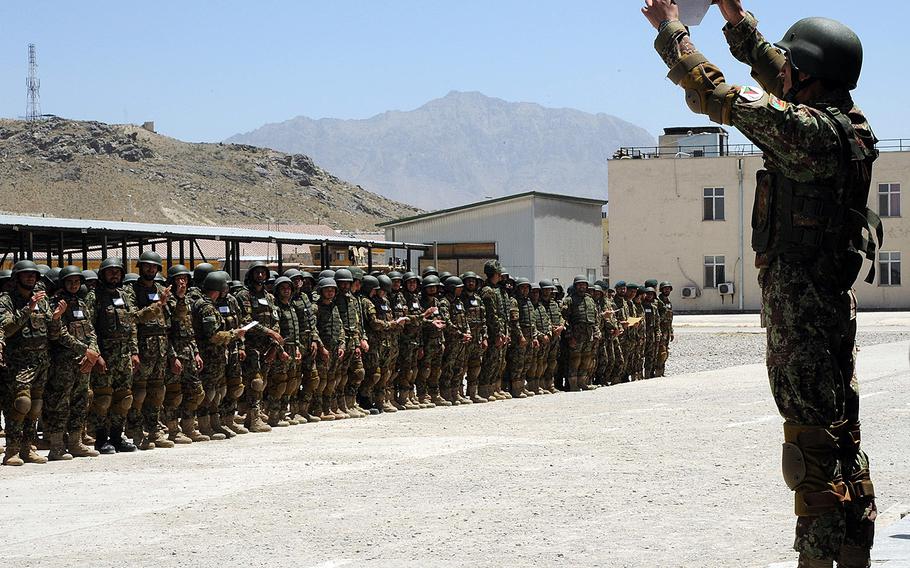 A member of the Afghan National Engineer Brigade proudly displays his certificate of training to fellow brigade members at a graduation ceremony June 18, 2014. (Patrick Gordon/U.S. Navy)

The brigade was created in 2013 to provide the Afghan military with combat engineering capabilities and to improve its effectiveness in civil reconstruction projects, including responding to natural disaster emergencies, building bridges and digging wells.

U.S. Forces-Afghanistan was responsible for training the brigade — made up of selected Afghan National Army troops — with a goal of making it “fully capable” by Oct. 1, 2014.

In May 2014, the goal was downgraded to establishing only a “partially capable” brigade by Dec. 31, 2014, SIGAR, the Special Inspector General for Afghan Reconstruction, said in a new report. That goal was not achieved either.

“Delays by the Afghan National Army in sending soldiers for engineer training and in providing engineering equipment required for training played a significant part in USFOR-A’s inability to achieve that goal,” SIGAR said.

“Knowing the challenges experienced with training ANA soldiers in the past, such as low literacy levels and soldiers not reporting for work, USFOR-A may have been overly optimistic in believing that the NEB could achieve a “partially capable” level in 8 months, let alone a ‘fully capable’ level within 10 months,” the report said.

“However, even if the NEB had attained a ‘partially capable’ level, by definition, the brigade would not have been able to operate independently,” it added.

The brigade was initially allocated $29 million in engineering equipment and vehicles that the Combined Security Transition Command–Afghanistan was responsible for purchasing, SIGAR said. But much of that equipment never reached the brigade.

“The NEB lacked initiative and only planned when USFOR-A advisors urged them to do so. Most significantly ... the NEB was not capable of carrying out its mission,” SIGAR said, citing an October 2014 assessment report.

SIGAR is tasked with analyzing the effectiveness of American reconstruction efforts in Afghanistan. Its reports regularly single out instances of waste and poor management and are often critical of the government agencies involved, including the Pentagon and State Department.

Some officials have complained, however, that the inspector general’s reports don’t always take into consideration the difficulties of operating in a war-torn country.

Resolute Support, the U.S.-led military coalition in Afghanistan, had no immediate comment on the latest report.

U.S. advisers ended their training mission for the NEB in December 2014. Following the departure of most coalition troops at the end of that year, the military lost its ability to regularly assess the progress of the brigade.

In its report, SIGAR did not offer recommendations for future improvements. But it said it was “unlikely that the brigade will be capable of fully supporting the ANA’s engineering needs in the near-term.”