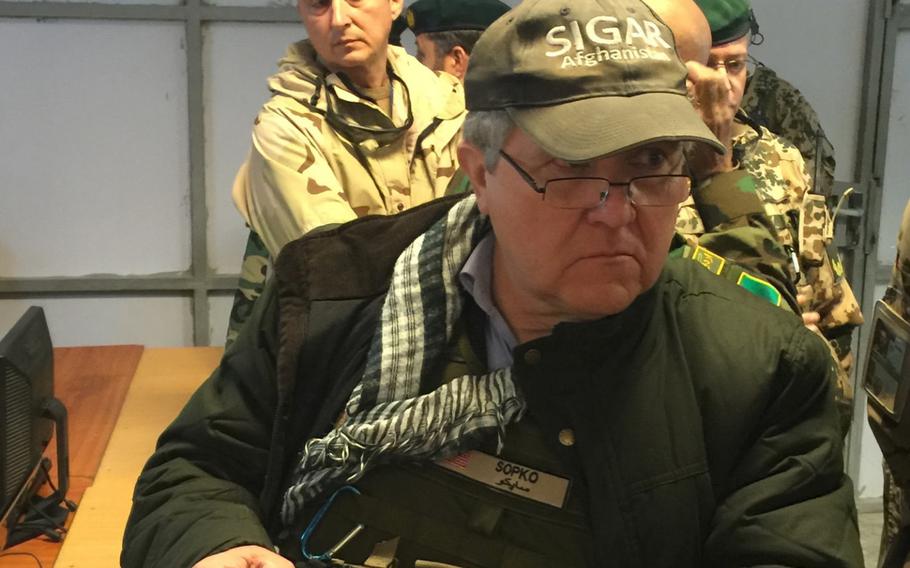 KABUL, Afghanistan — The watchdog for U.S. reconstruction efforts in Afghanistan says the responsiveness of the Trump administration has made him more optimistic than ever about the future of the country’s security forces.

The Special Inspector General for Afghanistan Reconstruction, who is known for blistering critiques that highlight projects that waste taxpayers’ money, said in an interview Friday with Stars and Stripes that he was upbeat about ongoing international efforts to help Afghanistan’s army and police force stand on their own.

He said his assessment was the result of new policies and the officials currently involved in the Afghan mission, including Defense Secretary Jim Mattis and the top U.S. commander in Afghanistan, Gen. John Nicholson.

“They have tremendous experience here,” Sopko said. “They understand what worked and what didn’t in the past, and they are very receptive to being self-critical and saying we’re not going to do that again.”

When asked if he had ever felt as optimistic during his five years as inspector general, Sopko replied: “I have not. But, I’m like Ronald Reagan: Trust, but verify. It’s my job to go in and verify that optimism.”

He acknowledges there’s still a long way to go before Afghan forces are self-sufficient, as they face “a tremendous number of problems,” one of the biggest being endemic corruption.

The main purpose of Sopko’s visit to the Afghan capital is to inspect a new anti-corruption strategy that President Ashraf Ghani’s government put forward at an international summit in Brussels last year.

“We got to deal with that,” Sopko said of corruption. “If we don’t deal with it, we’re going to lose.”

Congress established the Special Inspector General for Afghanistan Reconstruction, or SIGAR, in 2008 to detect and prevent waste, fraud and abuse of U.S. funds being spent in Afghanistan.

Since then, SIGAR has produced more than 400 audits, inspections, alert letters and other material that has identified roughly $1 billion in potential savings to U.S. taxpayers, according to the agency.

Sopko was sworn in as the Special Inspector General for Afghanistan Reconstruction in 2012 by President Barack Obama and has 30 years of experience in oversight and investigations as a prosecutor, congressional counsel and senior government adviser.

SIGAR’s latest “lessons learned” report last month looked at U.S. efforts to build the Afghan security forces. It concluded that Washington had not been properly prepared from the outset to help build an Afghan army and police force capable of protecting the country.

Strong local security forces are seen as vital to everything the U.S. and international coalition want to achieve in Afghanistan.

Before Trump announced his new Afghan strategy in August, SIGAR officials met with Mattis and Gen. Joseph Dunford, chairman of the Joint Chiefs of Staff, to discuss successes and failures of the 16-year war.

Sopko said he was unable to reveal the specific areas discussed. However, some recommendations listed in SIGAR’s September report —which had been researched for more than a year before publication — have been included in the new U.S. strategy, including training troops below the corps level and basing withdrawal on realties on the ground rather than a predetermined timeline.

“Was Gen. Mattis or Gen. Dunford thinking about some of these things before we met them? I don’t know,” Sopko said. “But they were very responsive and we’ve been very happy with our relationship.”

Relations between SIGAR and the Defense and State departments, as well as the U.S. Agency for International Development, have often been strained. Sopko has complained of unanswered messages in the past.

Did SIGAR’s work also play a part in this new optimism — helping the U.S. and its Afghan allies reach the point they are at today?