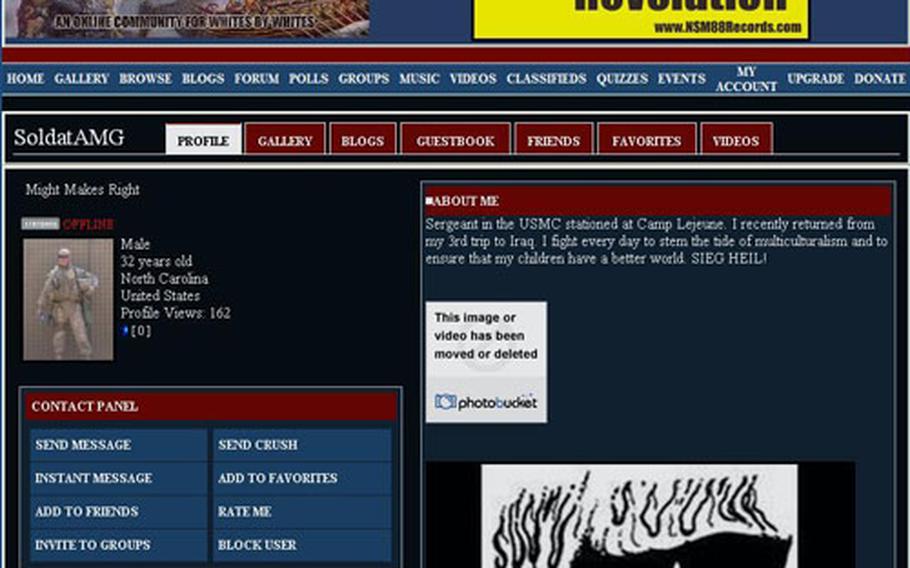 In his "about me" section, "SoldatAMG" describes himself as a "Sergeant in USMC stationed at Camp Lejeune. I recently returned from my 3rd trip to Iraq. I fight every day to stem the tide of multicultturalism and to ensure that my children have a better world. SIEG HEIL!" ()

In his "about me" section, "SoldatAMG" describes himself as a "Sergeant in USMC stationed at Camp Lejeune. I recently returned from my 3rd trip to Iraq. I fight every day to stem the tide of multicultturalism and to ensure that my children have a better world. SIEG HEIL!" () 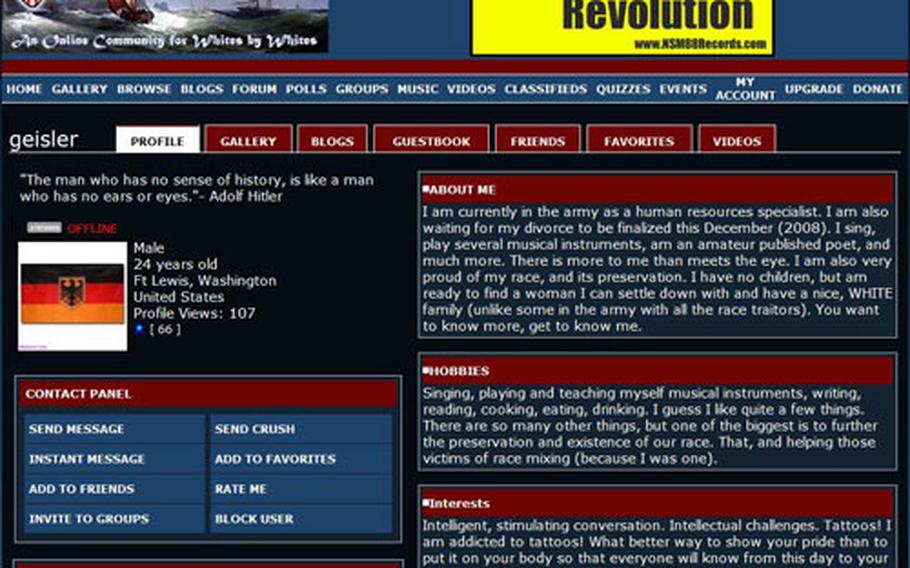 "geisler" identifies himself as "in the army as a human resources specialist." He says he is ready "to find a woman I can settle down with and have a nice, WHITE family (unlike some in the army with all the race traitors)." Among his hobbies is "to further the preservation and existence of our race. That, and helping those victims of race mixing (because I was one)." () 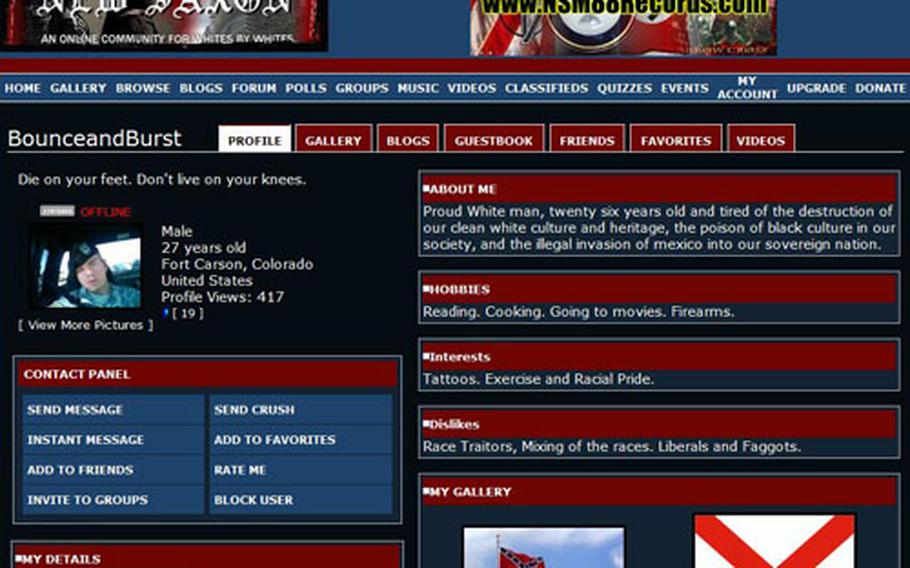 "BounceandBurst" says he is "tired of the destruction of our clean white culture and heritage, the poison of black culture in our society, and the illegal invasion of mexico into our sovereign nation." ()

WASHINGTON - It is Facebook for the fascist set, and the typical online profiles of its members reveal expected tastes.

Favorite movie: the Nazi propaganda film "Triumph of the Will."

Dislikes: "anyone who opposes the master race."

But there's one other thing that dozens of members of newsaxon.org, a white supremacist social networking website, have in common: They proudly identify themselves as active-duty members of the U.S. armed forces.

The Southern Poverty Law Center, the Montgomery, Ala.-based watchdog group that tracks extremist hate groups, has compiled a book containing the online user profiles of at least 40 newsaxon.org users who say they are serving in the military, in apparent violation of Pentagon regulations prohibiting racist extremism in the ranks.

On Friday, the SPLC will present its findings to key members of Congress who chair the House and Senate committees overseeing the armed forces and urge them to pressure the Pentagon to crack down.

"In the wake of several high-profile murders by extremists of the radical right, we urge your committees to investigate the threat posed by racial extremists who may be serving in the military to ensure that our armed forces are not inadvertently training future domestic terrorists," Morris Dees, SPLC co-founder and chief trial counsel, wrote to the legislators. "Evidence continues to mount that current Pentagon policies are inadequate to prevent racial extremists from joining and serving in the armed forces."

Added Mark Potok, editor of the Intelligence Report, a magazine produced at the law center: "The Pentagon really has shrugged this off and refused to look at this in any serious way."

On the newsaxon.org website, which Potok termed "a racist version of Facebook run by the National Socialist Movement," many participants list their branch of service, base location and hometown on colorful pages festooned with Nazi art and Confederate battle flags. Some say they have served or will soon be deployed to Iraq and Afghanistan. Several include pictures of themselves in camouflage combat uniforms.

One participant under the username "WhitePride85," who said he is a 24-year-old staff sergeant from Madison, Wis., wrote: "I have been in the Army for over 5 years now ... I am a SSGT ... I have been in Iraq and Kuwait ... I love and will do anything to keep our master race marching. I have been a skinhead forever."

The SPLC, which has previously alerted the military to the presence of racist extremists in its ranks, said none of the profiles its researchers discovered on the white supremacist website revealed the real names of participants, and the organization made no attempt to discover their identities.

"We can't verify these things," Potok said, because his group does not have access to military personnel records. "We feel that clearly military investigators could."

A Stripes reporter searched the user profiles listing their job category as "Military" and found 130 hits out of 7,906 total members.

A Defense Department directive issued in 1996 lays out the guidelines for "dissident" activities by service members, from publishing underground newspapers to organizing demonstrations.

"Military personnel must reject participation in organizations that espouse supremacist causes," the rule states. "Active participation, such as publicly demonstrating or rallying, fund raising, recruiting and training members, organizing or leading such organizations, or otherwise engaging in activities in relation to such organizations ... that are viewed by command to be detrimental to the good order, discipline, or mission accomplishment of the unit, is incompatible with Military Service, and is, therefore, prohibited."

But military officials gave conflicting answers this week when asked how policies governing racist behavior are being enforced.

A spokesman for the Department of the Army said the service takes seriously any allegations of membership in racist, extremist or hate groups. But he said such allegations are dealt with on a case-by-case basis at the unit disciplinary level or in the military justice system, and are not being addressed as an Army-wide problem.

The Army spokesman then referred Stripes to the Army's Criminal Investigation Command for more information. But that office refused to comment on Army policy on hate groups, saying that the issue of extremists infiltrating the ranks was "an Army-wide issue" that should be addressed at the service command level.

"If a sergeant is assigned to Fort Bragg," said Army spokesman Wayne Hall, "the Fort Bragg office of Criminal Investigation Command is going to investigate that individual, not the Department of the Army at this level."

If, for example, a soldier is found to have participated in a neo-Nazi rally, "Then it comes down to the unit commander," Hall said. "It's a violation of good order and discipline."

Hall added that extremist tattoos such as a swastika should disqualify an applicant for enlistment, but he could not say what disciplinary actions might be faced by an active-duty soldier found with such markings.

Potok said the SPLC has often encountered confusion within the U.S. military about how to interpret "active participation."

"That is the phrase that is often misunderstood," he said. "We know for a fact that military officials, in many cases, read &lsquo;active participation' as only recruiting people into another group, or only participating in some kind of hate group event off base."

In 2006, several members of Congress called for clearer language on such policies but got little reaction from the Pentagon, which has long said it has enough regulations to handle racists and extremists.

But last month, Rep. Alcee Hastings, D-Fla., attached an amendment to the 2010 defense authorization bill that would expressly ban the "recruitment, enlistment or retention" of anyone tied to an extremist group.

This week, Stripes e-mailed interview requests to more than a dozen newsaxon.org participants claiming military affiliations. Only one responded.

The user, "clarkpatrick88," said he would not reveal his real identity for fear of reprisals, but he said he was a 19-year old sailor. His profile includes a picture in which he is holding a Confederate insignia while wearing his blue Navy working uniform with a name patch reading "Clark." The number 88 is commonly used among neo-Nazis as shorthand to the greeting, "Heil Hitler."

"As for my political views, I have never once put them before my duty I signed up for," the sailor said in one of his e-mails. "I didn't outwardly show my beliefs or cause trouble."

The sailor said he grew so frustrated at military life and at being closely quartered with servicemembers of other races that he sought psychiatric counseling for suicidal thoughts. He spent three days in the "psych ward," he said, and is now being separated from the service on its recommendation.

In 2006, the SPLC released a report asserting that "thousands" of active-duty troops like clarkpatrick88 could have hate group affiliations. The law center said that some military officers conceded that recruitment and retention pressures forced them to look the other way when presented with overwhelming evidence of hate group membership.

Later, the FBI said it suspected hundreds of servicemembers had been recruited into extremist groups.

Last November, the SPLC, feeling its warnings to former Defense Secretary Donald Rumsfeld had been ignored, urged the current secretary, Robert Gates, to revisit the issue.

"Since we issued our 2006 report, the problem may have worsened," SPLC President Richard Cohen wrote to Gates.

By this spring, a Department of Homeland Security report said law enforcement groups should beware of extremists coming out of military duty or groups trying to recruit susceptible veterans for their combat skills.

The report was criticized by some veterans and conservative groups as inherently anti-military.