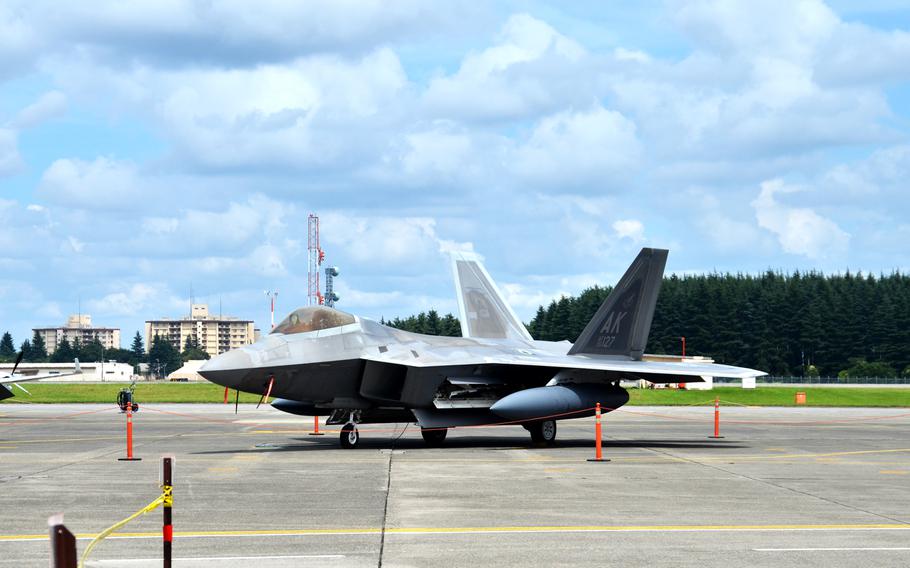 Buy Photo
An F-22, assigned to the 525th Fighter Squadron out of Joint Base Elmendorf-Richardson, Alaska, sits on the runway at Yokota Air Base, Japan on July 9, 2018. (Seth Robson/Stars and Stripes)

The Air Force has 186 F-22 aircraft, which is widely regarded as one of the world’s elite fighter jets.

“The Air Force’s organization of its small F-22 fleet has not maximized the availability of these 186 aircraft. Availability is constrained by maintenance challenges and unit organization,” according to the 38-page report by the Government Accountability Office, an investigative arm for Congress that routinely reviews U.S. agencies and programs. “The Air Force’s utilization of its F-22 fleet has limited pilot opportunities to train for air superiority missions in high threat environments.”

F-22 pilots are not meeting annual training requirements, according to Air Force reports and service officials, the GAO report stated. In addition, the use of F-22s for exercises and operational missions that don’t require the aircraft’s unique capabilities disrupt pilot training and lead to reduced proficiency, the report stated.

For example, pilots are restricted from using certain F-22 capabilities during partnership building exercises for fear of exposing the fighter jet’s unique features. Air Force officials said these restrictions limit the value of the exercise and can lead to bad habits, the report stated.

The F-22 jets are also used to support alert missions, or missions that require certain bases to have jets ready at all times to respond to threats from civil or military aviation. The alert missions fall to the F-22s since the jets are based in Alaska and Hawaii, where no other operational Air Force fighter squadrons are based.

In addition, the Air Force organizes its F-22 fleet into small units of 18 to 21 aircraft per squadron and one or two squadrons per wing, which creates maintenance inefficiencies, the GAO report states. For example, among its specific demands, the F-22’s stealth coating requires time-consuming maintenance and reduces the jets availability for missions.

In addition , the Air Force organized operations for its F-22 squadrons from a single location when it generally only deploys part of a squadron, the report stated.

“The remaining part struggles to keep aircraft available for missions at home,” according to the report. “Larger, traditional Air Force squadrons and deployable units provide a better balance of equipment and personnel.”

The Air Force has not assessed the structure of its F-22 fleet since 2010, the report stated. Without such a review, the Air Force might be losing opportunities to improve the availability of its small, yet critical F-22 fleet, and support air combat needs in high-threat environments, the agency said.

The full report can be read on the GAO website.