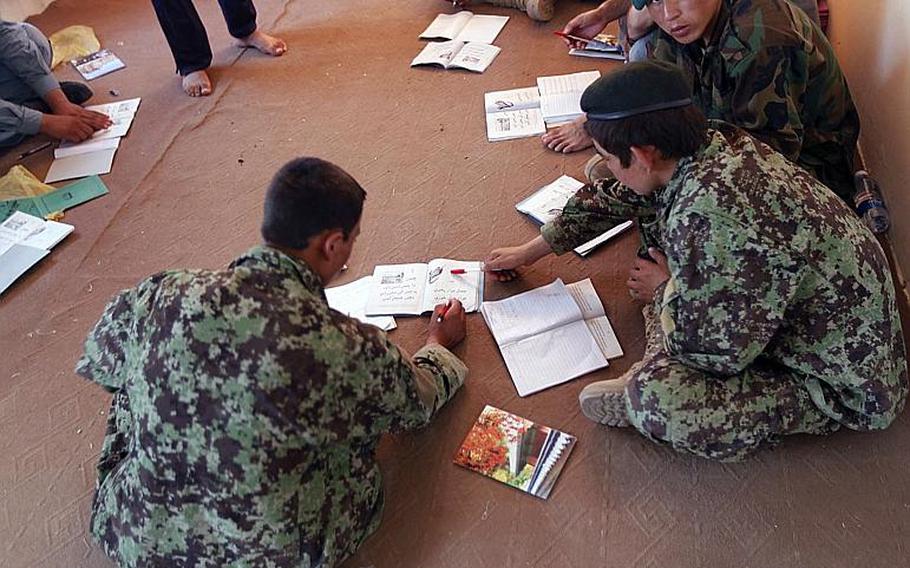 KABUL — A $200 million literacy program has had “limited impact” on reading levels within the Afghan security forces and more than half of Afghanistan’s soldiers and police officers may still be unable to read, according to a report from the top U.S. watchdog in Afghanistan.

The report, from the Special Inspector General for Reconstruction in Afghanistan, found a lack of oversight in the program put taxpayer money at risk of fraud and that military officials said the program’s goal of 100 percent literacy for the Afghan National Security Forces may be “unrealistic” and “unattainable.”

“The command’s ability to measure the effectiveness of its literacy training program and determine the extent to which overall literacy of the ANSF has improved is limited,” the report said. “None of the three literacy training contracts requires independent verification of testing for proficiency or identifies recruits in a way that permits accurate tracking as the recruits move on to army and police units.”

In response to the report, the NATO-led International Security Assistance Force (ISAF) released a statement saying it had issued new literacy and language contracts to “improve delivery and oversight.”

“These measures will not only improve fiscal oversight, they will ensure that we build upon the gains we have achieved in providing formal literacy training to more than 382,500 Afghan soldiers and police,” Maj. Gen. Dean Milner, commander, NATO Training Mission – Afghanistan, said in the release. “Literacy is a powerful capability that contributes not only to the professionalism of the ANSF, but to the strengthening of Afghan society.”

From the report dc.embed.loadNote('http://www.documentcloud.org/documents/1009886/annotations/142138.js'); Illiteracy is rife in Afghanistan, with just 28 percent of the population able to read, although literacy rates among males, who make up almost the entire Afghan security forces, are roughly 43 percent, according to the CIA World Factbook.

While ISAF says 224,826 soldiers have attained a basic reading level over the course of the program, which began in 2009, it’s unclear what that actually means for literacy rates in the current ranks of the security forces due to an attrition rate of 30 to 50 percent, according to the inspector general report.

Further, the report found that between July 2012 and February 2013, 45 percent of Afghan National Police were sent to the field without receiving any literacy training.

Among the recommendations laid out in the SIGAR report were making program goals more realistic, implementing independent verification of students’ language capabilities and better defining requirements for achieving literacy standards.

According to its release, ISAF said new oversight has saved the program $19 million and officials are also working to develop a corps of 2,500 Afghan trainers in order to turn the program over to full Afghan control by December.

“The initiative will ensure the transition is viable from a human resource and a fiscal stewardship perspective as teaching resources will be provided from within the ANSF itself, at little to no additional salary cost,” the ISAF release said.