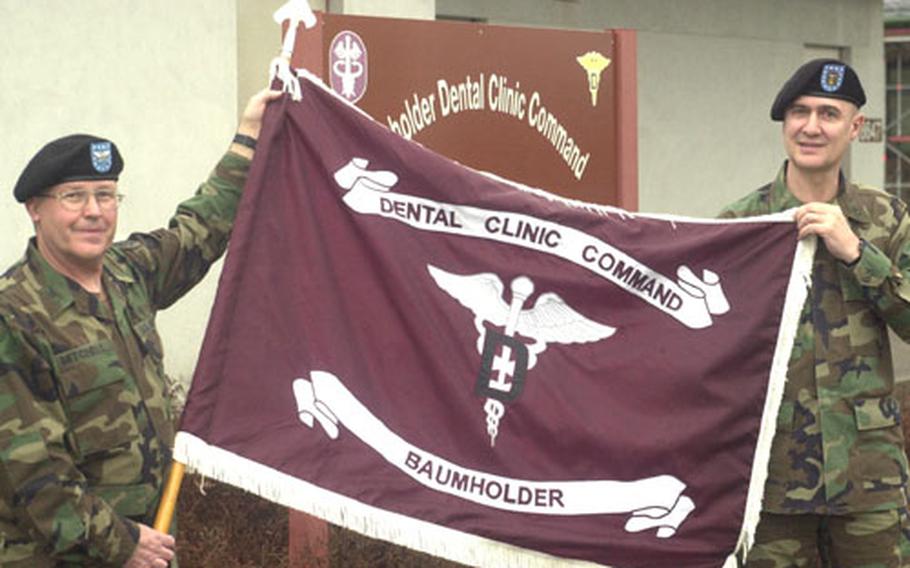 BAUMHOLDER, Germany &#8212; Another command flag is flying in Baumholder.

In a ceremony Thursday afternoon, Col. E. Eldon Mitchell unfurled the command flag for the Baumholder Dental Clinic after a 2-year hiatus. The clinic joins the 2nd Brigade and Division Artillery commands of the 1st Armored Division based at Baumholder.

The reactivation means that the facility &#8212; considered the flagship dental clinic in Europe &#8212; will now take over a number of functions from the dental command at nearby Landstuhl Hospital, said Mitchell, clinic commander.

Those include in-processing and out-processing soldiers in Baumholder rather than busing them to U.S. Army European Regional Dental Command and Landstuhl Dental Activity, about 50 miles south of Baumholder.

Baumholder will also add administrative and record keeping functions. Army officials upped the status after &#8220;they realized it just wasn&#8217;t efficient&#8221; shuttling personnel and records between Baumholder &#8212; the largest concentration of tactical troops in Europe &#8212; and Landstuhl, Mitchell said.

Clinic staff treated 27,000 patients in 2002, providing $5.4 million worth of dental care, according to Mitchell. It offers every dental specialty except oral surgery, as well as a 1-year advanced residency program.