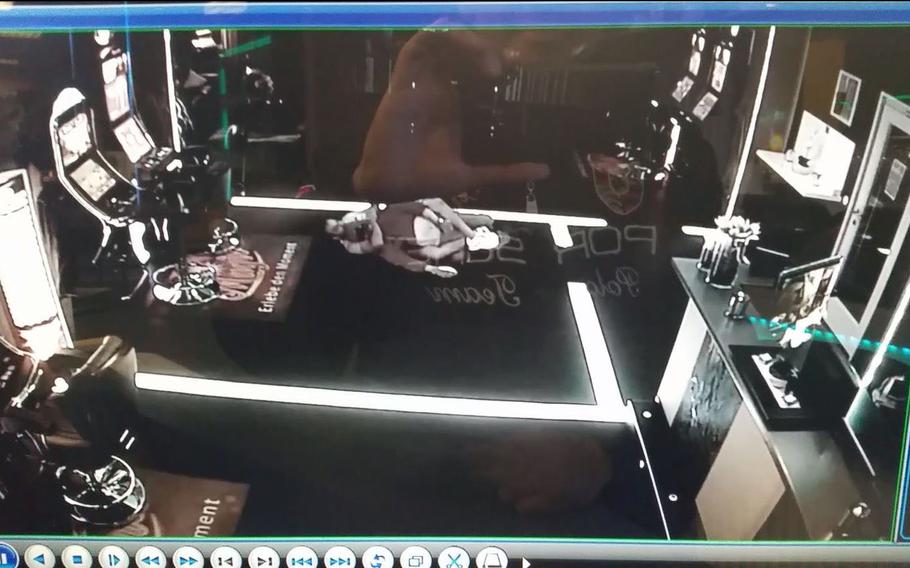 In this screen shot from a surveillance camera, Elliot Montalvan grapples an armed perpetrator when the man attempted to rob a casino in 2017. (Courtesy of Elliot Montalvan)

In this screen shot from a surveillance camera, Elliot Montalvan grapples an armed perpetrator when the man attempted to rob a casino in 2017. (Courtesy of Elliot Montalvan) 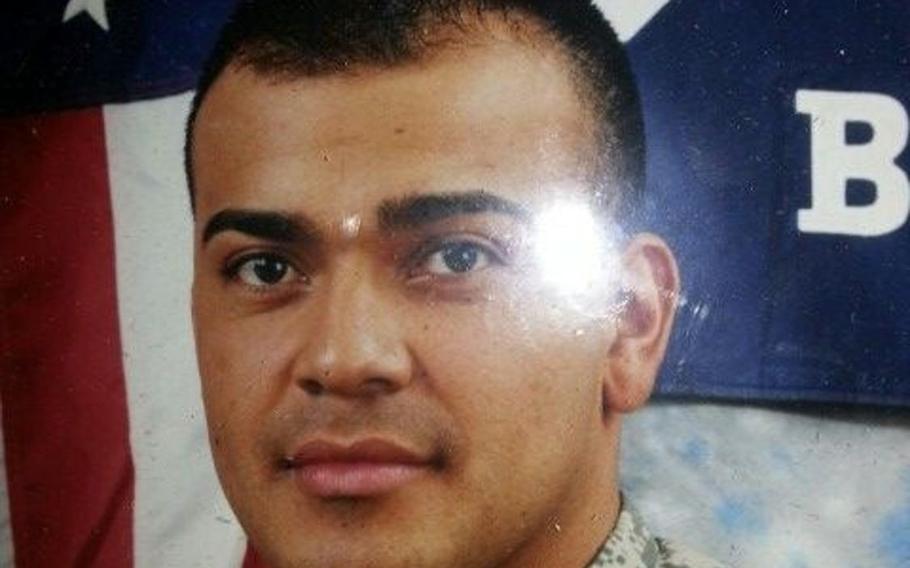 Elliot Montalvan, shown here in this 2005 photo as a sergeant with the 172nd Infantry Brigade, 1st Battalion, 2nd Infantry Regiment out of Schweinfurt, Germany. A man was convicted of armed robbery on Jan. 30, 2018, after Montalvan stopped the perpetrator when he entered a casino with a gun in 2017. (Courtesy of Elliot Montalvan)

KAISERSLAUTERN, Germany — It was past midnight last summer when former U.S. soldier Elliot Montalvan unexpectedly drew on his Army combat training at a casino in the small Bavarian town of Heidingsfeld.

A 48-year-old masked, armed man entered the gambling hall where Montalvan was working.

When Montalvan, 35, who served in Operation Iraqi Freedom, saw the robber approaching him, he thought it was a joke. The man was wearing working gloves, a ski mask, a Batman mask and a scarf.

The perpetrator, who was not named by German authorities, was sentenced on Jan. 30 to three years and three months in prison for attempted armed robbery, with help from Montalvan’s testimony.

On Monday, Montalvan shared the story and a surveillance video of how he took the robber down.

“I thought someone wanted to play a prank on me,” Montalvan said. But then he heard the guy saying in German: “Give me the money.”

When Montalvan saw the gun, his first thought was that he needed to get control of the situation. He leaned on his infantry training from his Army service from 2004 to 2010, which included time with the 172nd Infantry Brigade, 1st Battalion, 2nd Infantry Regiment out of Schweinfurt, Germany.

When the robber walked in front of him toward the front counter, Montalvan saw a chance to attack.

He grabbed the robber’s gun hand, put his arm around him and brought him to the ground.

“We went down with such a force that, I (thought) the robber was for a moment unconscious or shocked,” Montalvan said.

When the robber squeezed his hand, Montalvan realized that this guy “would not give up.”

“I started pounding him with a closed palm,” he said, using a technique he had learned in the Army.

Even that wasn’t enough. After a few minutes of scuffling, he used a wrestling hold and choked the man until he lost consciousness.

Montalvan said that immediately after he took the robber out, his “first aid reflexes” took over.

He checked the robber’s pulse and turned him facedown so he wouldn’t choke on his own blood. One of the robber’s cheekbones was broken, according to German media reports about the incident.

The former soldier went to call the police but couldn’t remember the number. He called his wife, who called them for him.

When he heard the sirens, Montalvan went outside, knelt down, held his hands up and told the police he was not the bad guy.

Montalvan said his wife was actually supposed to work that night at the gambling hall, but their children got sick and she had to stay at home.

This was the first time he filled in for his wife, he said. Montalvan, who is from Arkansas, said he suffered from post-traumatic stress disorder after he saw his best friend, Eric Palacios, die next to him during a deployment to Iraq. Montalvan's back was injured when a vehicle he was in hit a roadside bomb.

The injuries led to six pins in his back and a 100 percent disability determination, Montalvan said. But that didn’t stop him when it counted.

“I never thought that what I learned could one day really save your life,” Montalvan said. “I never realized it until this night.”