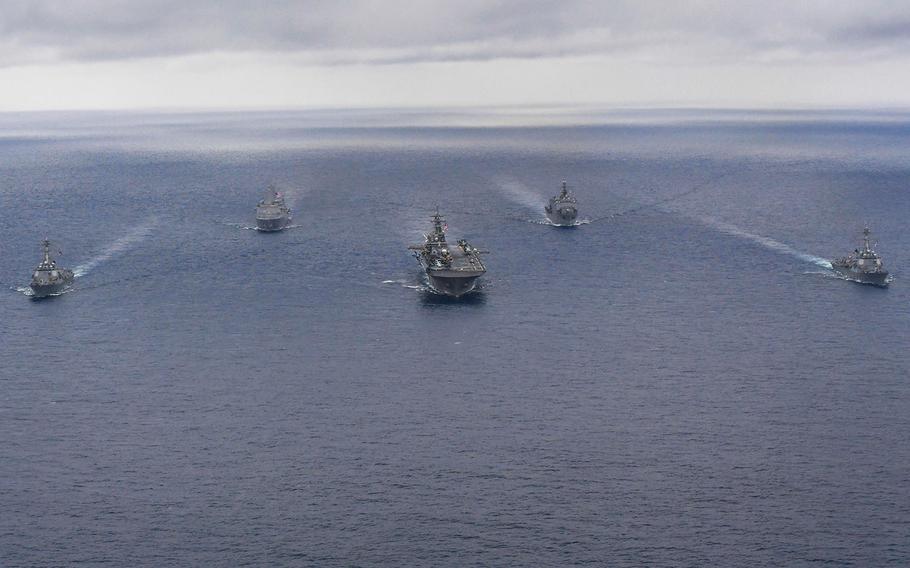 The USS Wasp strike group, which includes the USS Dewey, from left, the USS Green Bay, the USS Wasp, the USS Ashland and the USS Sterett, steams in formation in the Philippine Sea, April 17, 2018. (Richard Gourley/U.S. Navy)

MARINE CORPS AIR STATION IWAKUNI, Japan — Two thousand, three hundred Marines are back on Okinawa after more than a month at sea accompanying the USS Wasp amphibious warship and F-35B stealth fighters on their first patrol of the Western Pacific.

The Wasp, which arrived at its new homeport of Sasebo Naval Base in January, also trained alongside a Japanese amphibious transport dock ship in the East China Sea.

“[It’s] not your grandfather’s amphibious readiness group,” he said. “It’s a lethal, capable, integrated naval force that is designed to conduct both the sea-control mission, which is what we do in the Navy, as well as project power ashore.”

Combining the F-35B with destroyers is a big advantage, giving the strike group the ability to hunt enemy submarines and ships and engage in surface-to-surface combat, Cooper said.

The destroyers’ Tomahawk missiles can project power ashore and their sensors can detect enemy aircraft at long range while the F-35B can defend amphibious forces. Meanwhile integration of sensors aboard all the ships of the strike group gives commanders a robust picture of the battlespace, he said.

Capt. Ed Thompson, who led the strike group as commodore of Amphibious Squadron 11, said in the statement that his ships, aircraft, sailors and Marines “created a highly capable, flexible force ready for the spectrum of operations at sea.”

The destroyers have left the strike group and will eventually return to their homeport in San Diego, the statement said.

Navy leaders are already reviewing lessons learned on the patrol, and will incorporate those into future deployments, he said.

The Wasp has replaced the USS Bonhomme Richard, which is heading to San Diego for upgrades after spending six years based at Sasebo.