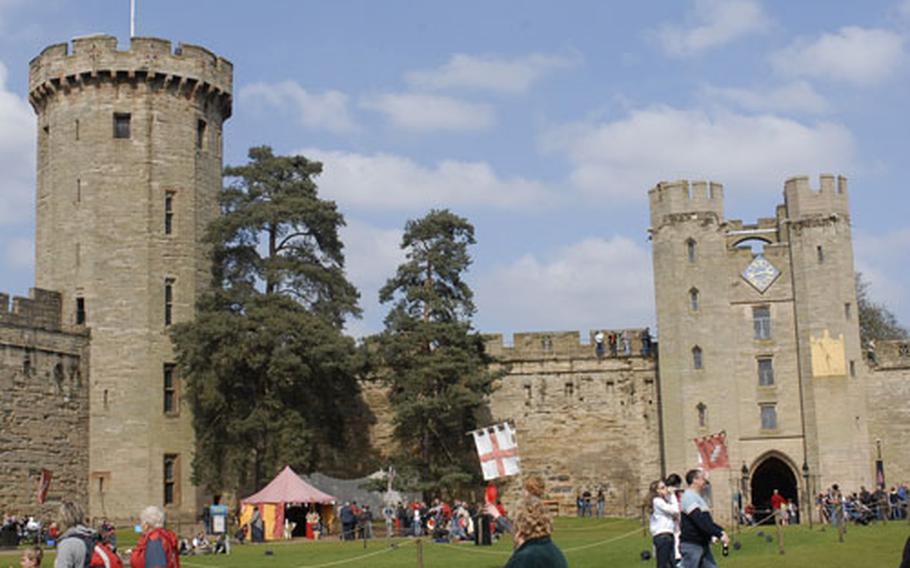 The courtyard at Warwick Castle is buzzing with a variety of activities to give visitors a look at what life was once like at the castle. The castle draws about 600,000 visitors a year, and is near William Shakespeare’s home in Stratford-on-Avon. (Mark Abramson / S&S)

The courtyard at Warwick Castle is buzzing with a variety of activities to give visitors a look at what life was once like at the castle. The castle draws about 600,000 visitors a year, and is near William Shakespeare’s home in Stratford-on-Avon. (Mark Abramson / S&S) 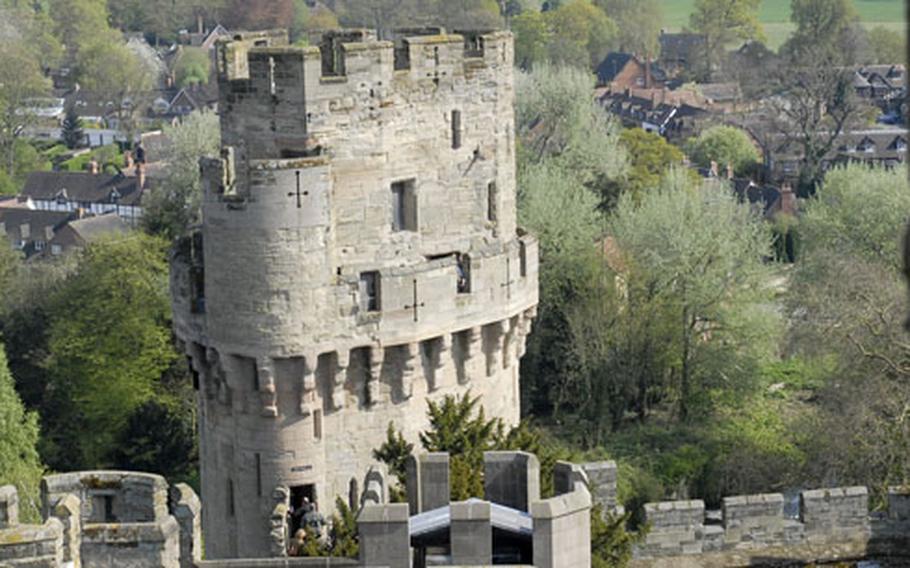 Visitors to Warwick Castle can explore the nearly 1,000-year-old fortress by walking up spiraling staircases to its towers and taking in views of the scenery and the city of Warwick. (Mark Abramson / S&S) 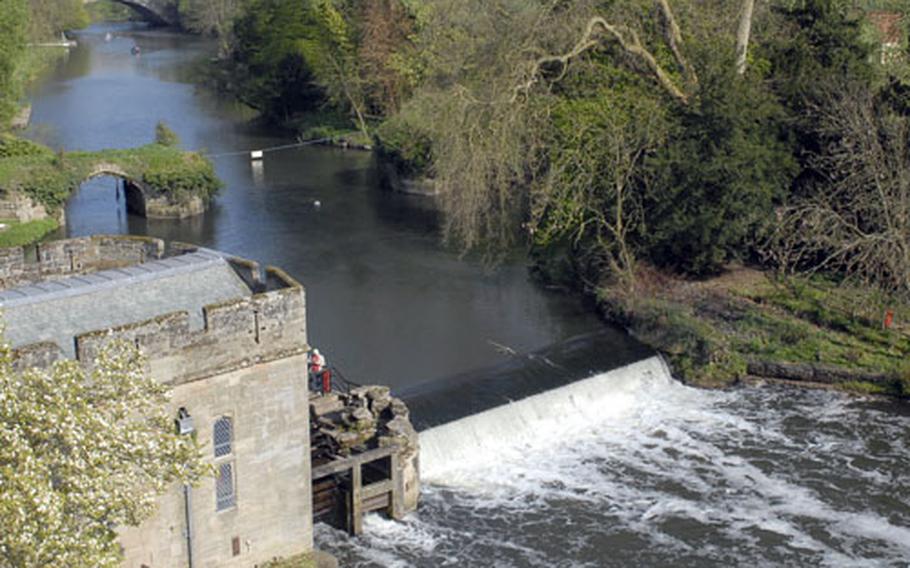 The scenery of Warwick Castle is one of the draws to the fortress, which was built in 1068. The castle is perched along a river. (Mark Abramson / S&S) 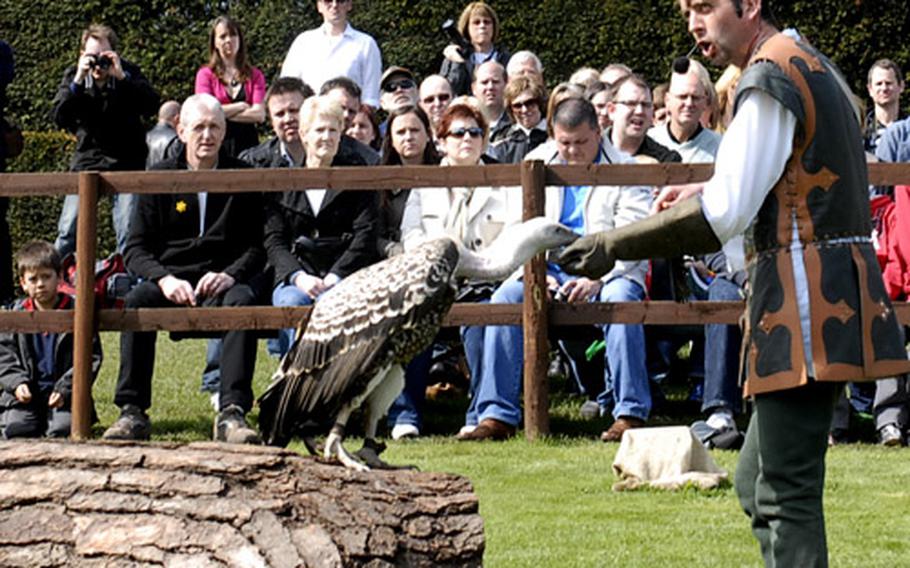 The "Birds of Prey" show at Warwick Castle is one of the many attractions giving it a theme-park feel. Visitors can also enjoy shooting a bow and arrow, learn to sword fight and explore the castle’s Great Hall, which is filled with suits of armor, swords and other weapons. (Mark Abramson / S&S)

WARWICK &mdash; Its operators boast that it is Britain&rsquo;s ultimate castle, and it is one of the United Kingdom&rsquo;s most famous medieval sites.

Given its nearly 1,000-year history, the British charm of its Great Hall and its towers with spectacular views, Warwick Castle is a beautiful fortress set on a picturesque landscape.

Now it is owned by the Merlin Entertainment Group, which also owns Madame Tussauds wax museum.

The castle was the third one built by William the Conqueror after he invaded Britain in 1066. It traces its history to 1068. Today it draws 600,000 visitors a year, said Mark Anderson, the international trade manager for the castle.

"The reason it is so popular is the castle is unique," Anderson said. "It has lots of indoor attractions, including the Great Hall and state rooms. We have extensive grounds, towers and ramparts that you can explore."

Another draw to the castle is that it has elements from the medieval, Tudor and Victorian times, Anderson said.

Situated about a three-hour drive from RAF Mildenhall and RAF Lakenheath, it is easy to reach. Information Tickets & Travel offers frequent day trips to the castle and the nearby home of William Shakespeare in the Stratford-on-Avon district for 26 pounds. That&rsquo;s a good deal, since adult admission for the castle alone can cost up to 16.95 pounds.

Because it&rsquo;s about 15 minutes from the Shakespeare sites, the castle is able to draw an international crowd, Anderson said.

One plus of Warwick Castle is that its grounds are easy to walk, apart from a trek along its ramparts and up and down narrow spiraling tower staircases that could be a little hard to take if you are claustrophobic.

Inside the castle&rsquo;s gate is a courtyard abuzz with activities that seem more in line with Disneyland or a carnival than Old England. People clad in medieval costumes give children lessons in the art of sword-fighting, and visitors can try their hand at archery for 3 pounds a pop. The courtyard is also popular among picnickers.

"On the whole, the attractions we put at the castle are well-received," Anderson said. "We do get some criticism that it is run as a theme park &hellip; but that is what brings it to life. On the whole, it is hugely popular."

Another popular activity in the old fortress is a tour of the castle dungeon, which is advertised as a trip back to 1345, when plague gripped the area, and a look into the world of torture tools.

There is also a twice-daily birds of prey show. Performers donning medieval attire show off eagles and vultures, to name a few species. Sometimes, audience members have to duck to get out of the way as one of the large, feathered critters swoops in to get a treat.

The inside of the castle seems more authentic, with its Great Hall and the suits of armor, swords and other weapons that fill its largest room and are indicative of its history. There are also rooms filled with paintings of Henry VIII&rsquo;s ex-wives and monarchs, chandeliers and furniture that no doubt date back hundreds of years.

For ticket prices, to order online for a discounted rate and for other information, go to www.warwick-castle.co.uk