'Warrior University' credited with lowering crime at bases in Korea 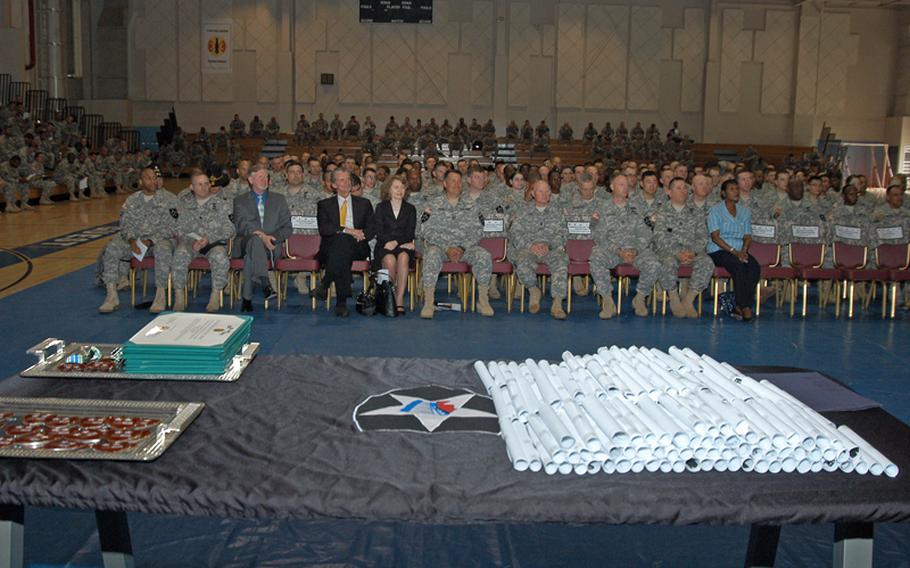 Buy Photo
Diplomas and certificates sit on a table prior to being distributed at a Warrior University Recognition Event Thursday at Camp Casey in South Korea. More than 200 members of the 2nd Infantry Division were honored for taking at least five college classes -- and maintaining at least a 3.0 average -- since the Warrior University program was started 18 months ago. The program allows soldiers off work two hours early two days a week if they attend college classes. (Jon Rabiroff/Stars and Stripes)

Buy Photo
Diplomas and certificates sit on a table prior to being distributed at a Warrior University Recognition Event Thursday at Camp Casey in South Korea. More than 200 members of the 2nd Infantry Division were honored for taking at least five college classes -- and maintaining at least a 3.0 average -- since the Warrior University program was started 18 months ago. The program allows soldiers off work two hours early two days a week if they attend college classes. (Jon Rabiroff/Stars and Stripes) 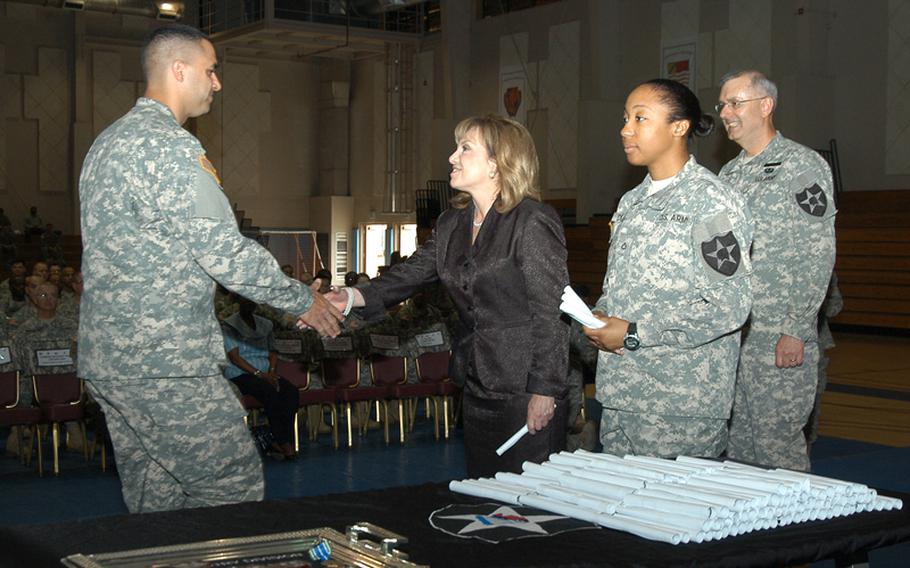 Buy Photo
University of Maryland University College President Susan Aldridge, center, congratulates one of more than 200 Warrior University students honored at a recognition event Thursday at Camp Casey in South Korea. The program encourages soldiers to take college classes, and has been cited by Maj. Gen. Michael Tucker, at right behind Aldridge, as a reason crime is down significantly in his 2nd Infantry Division. (Jon Rabiroff/Stars and Stripes) 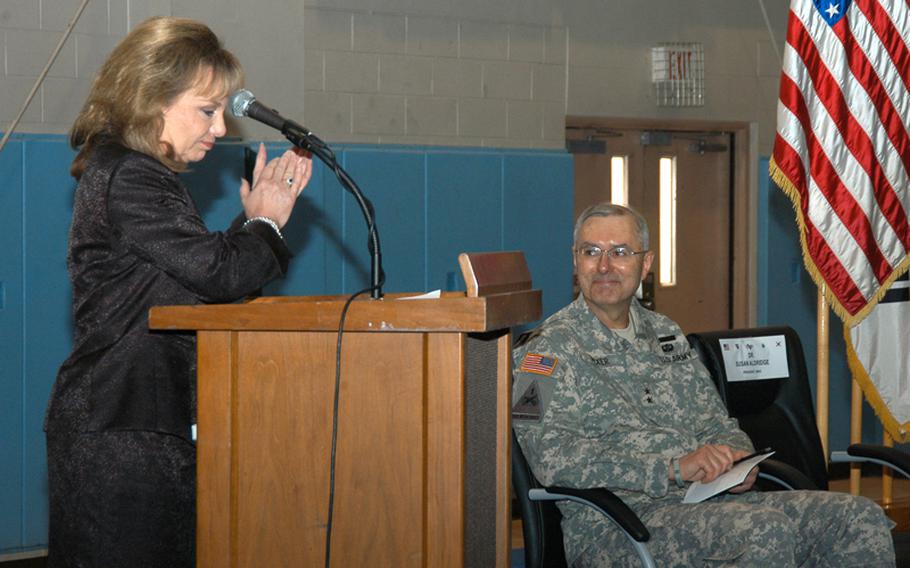 Buy Photo
University of Maryland University College President Susan Aldridge leads the audience in applause for Maj. Gen. Michael Tucker, the commander of the 2nd Infantry Division, for his Warrior University program Thursday at Camp Casey in South Korea. Tucker says a significant drop in crime among his division can be attributed to the program, through which soldiers are encouraged to take college classes. (Jon Rabiroff/Stars and Stripes) 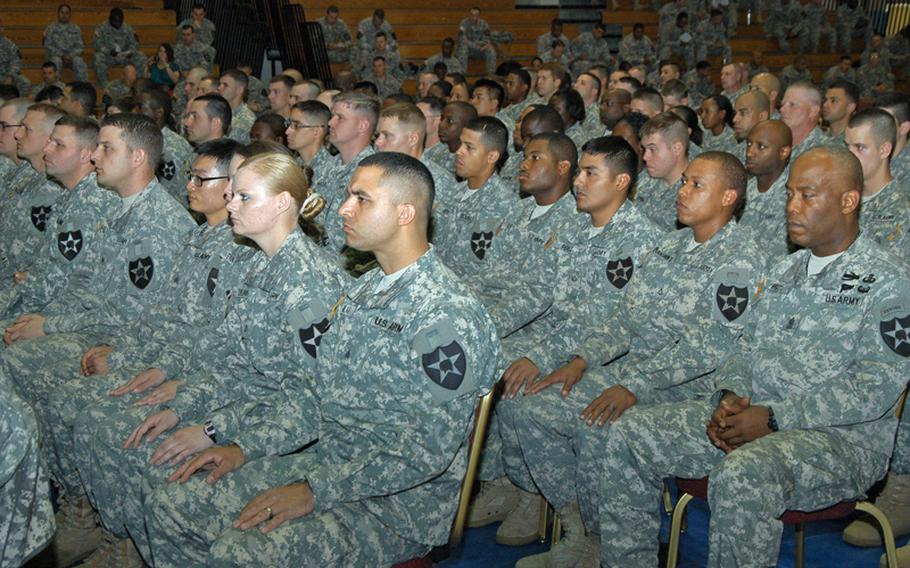 Buy Photo
Second Infantry Division soldiers look on during a Warrior University Recognition Event Thursday at Camp Casey in South Korea. More than 200 soldiers were honored for completing at least five college classes and maintaining at least a 3.0 average through Warrior University. The program encourages soldiers to take college classes and is being credited by 2ID officials with a significant drop in crime among soldiers in the ranks. (Jon Rabiroff/Stars and Stripes) 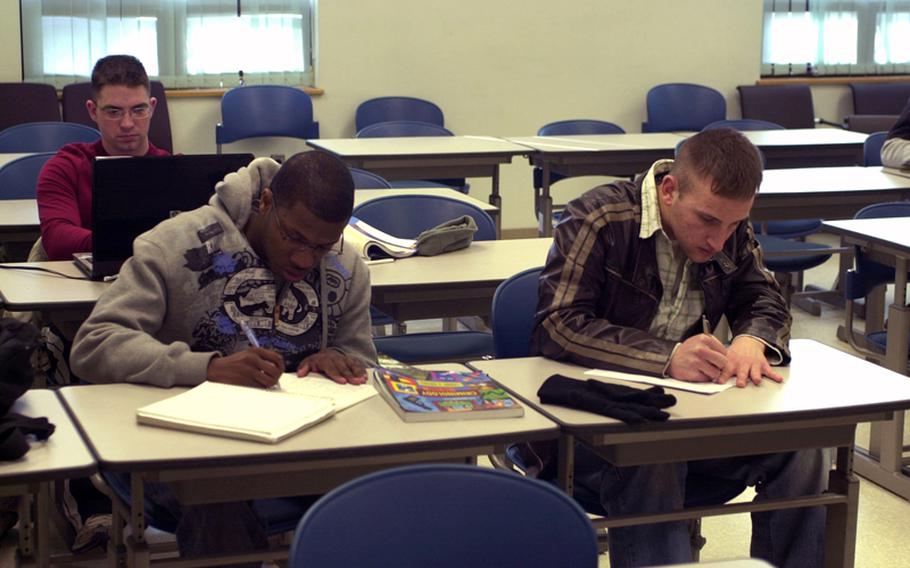 CAMP RED CLOUD, South Korea &mdash; Crime is down dramatically among soldiers in the 2nd Infantry Division, which covers almost 10,000 troops stationed mostly between Seoul and the Demilitarized Zone.

Crimes against persons dropped 65 percent, from 936 to 325, when comparing reports of all soldier-related incidents compiled over the most recent 12-month period from all police agencies and the U.S. military in and around 2nd ID bases in South Korea and comparing them to the year before.

Sex crimes dropped 63 percent, from 95 to 35, over the same period. DUI and drug offenses were also down more than 50 percent.

The drop in soldier-related crime has been noticed by Park Sang Yung, the police chief of Dongducheon, which is home to Camp Casey, Camp Hovey and the largest concentration of 2nd ID soldiers.

Trying to explain any significant spike or drop in crime is, at best, an inexact science. But Park suggested a couple of explanations: &ldquo;The U.S. military strictly controls its soldiers &hellip; (and) better-educated soldiers have been coming to Korea than in the past.&rdquo;

Maj. Gen. Michael Tucker, the 2nd ID commander, said it is not how educated the soldiers are before they arrive, but rather the education they receive once in South Korea, that could be behind the improving crime statistics.

He believes that the crime rate among his ranks has dropped as enrollment in college courses among the soldiers has gone up tenfold &mdash; from 522 in March of 2010 to 5,151 in March of this year.

Shortly after assuming command of the division 18 months ago, Tucker launched &ldquo;Warrior University&rdquo; &mdash; a program in which his soldiers are allowed out of work two hours early two days a week if they attend college classes.

&ldquo;We can see real results in the reduction in crime numbers &mdash; hard, factual numbers &mdash; in contrast to when we didn&rsquo;t have [Warrior University],&rdquo; Tucker said. &ldquo;Education goes up; crime goes down.&rdquo;

Spc. Kelsey Evans, a 2nd ID soldier working toward a bachelor&rsquo;s degree in criminal justice through Warrior University, said the number of soldiers taking class is helping take a bite out of crime in her division.

&ldquo;I know I&rsquo;m extremely busy with all the classes I&rsquo;m taking,&rdquo; she said. &ldquo;I know all the students that I&rsquo;m with in class always talk about just going home and studying, and all the work they put into it. So, we don&rsquo;t have time to go get in trouble.&rdquo;

Tucker was quick to point out that he has not discovered any cure for crime, just a way to focus the energies of a percentage of soldiers who might otherwise be susceptible to getting into trouble.

&ldquo;But, those soldiers who perhaps are on the fence, or on the good side of the fence, this is perfect for them,&rdquo; he said. &ldquo;When they get here, we get our arms around them early and we begin to educate them and we give them alternatives because they have all this free time that they&rsquo;ve never had before.&rdquo;

Campbell, 43, added, &ldquo;We work with a lot of fresh-out-of-high-school soldiers who just don&rsquo;t know any better. So, having this amazing opportunity of Warrior University I think gives people confidence that, &lsquo;I can do this,&rsquo; and I think that confidence bleeds into other areas.&rdquo;

Tucker said 94 percent of his division&rsquo;s soldiers ranked E-4 and below are coming to South Korea on their first Army assignment, where for the first time in their lives they are no longer living the &ldquo;very structured&rdquo; existence they had at home with their parents, in high school, basic training or advanced individual training.

If the Army is not careful, Tucker said, &ldquo;they get in with the wrong crowd. They get into drunk-and-disorderly conduct. Before you know it, there&rsquo;s an Article 15; they&rsquo;re too drunk to come to PT; they miss formation; they become a discipline problem in the platoon; they could get into illegal drugs &hellip; maybe into prostitution.

&ldquo;And it just continues to manifest itself and go downhill,&rdquo; Tucker said.

By trading work hours for classroom time, the commander said soldiers are put on the right track toward a potential life of self-discipline. Warrior University is just one element of what he calls the REAL (Responsible, Educated and Alcohol Limiting) Warrior campaign &mdash; which also features an improved pre-arrival sponsorship program, bringing in guest speakers, teaching responsible alcohol use, installing WiFi in all 2nd ID dining facilities and expanding their hours so soldier-students have ample places and time to study.

&ldquo;When you can create activities that can enhance and foster self-discipline, you&rsquo;re really ringing the bell now in terms of creating soldiers that exemplify selfless service for their country,&rdquo; he said. &ldquo;The one thing that school, off-duty education, gives you or exemplifies is self-discipline. Self-discipline makes you do the right things when no one&rsquo;s looking.&rdquo;

Tucker is so excited about the results of his REAL Warrior program that he recently began sharing information about it with other commanders and Pentagon officials. 2nd ID officials said it&rsquo;s too soon to know whether elements of the REAL Warrior program will be put into action at other bases.

Tucker said while he was encouraged that crime was down in categories most often associated with alcohol or drug abuse, he saw there was more work to be done about crimes of opportunity, or property crimes, which only dropped by one &mdash; from 284 to 283 &mdash; from one reporting period to the next.

In hopes of reducing thefts, Tucker is having closed-circuit monitoring systems installed in 23 barracks.

&ldquo;It&rsquo;s a deterrent,&rdquo; he said of the system. &ldquo;Most of the motivation behind property crimes &hellip; [is a] need for money, quickly. It&rsquo;s going to keep honest people honest.&rdquo;