Warrior Games profile: It all came down to one arrow 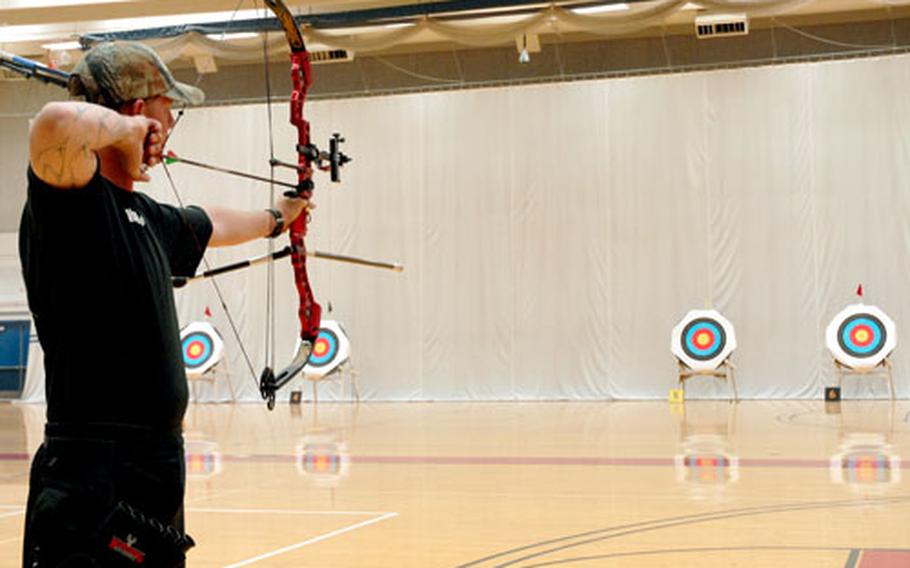 Spc. Travis Akin, who has TBI and PTSD, competes for bronze Tuesday in the archery competition of the inaugural Warrior Games for wounded service members at the Olympic Training Complex in Colorado Springs, Colo. He lost out on the medal to fellow soldier Sgt. Robert Price. (Megan McCloskey / S&S)

PREVIOUS STORY:Torch is lit on inaugural Warrior Games in Colorado

COLORADO SPRINGS, Colo. &#8212; Winning a medal at the Warrior Games in archery came down to one arrow.

Spc. Travis Akin was in a shootout for bronze Tuesday with fellow wounded soldier Sgt. Robert Price. They each got one shot. And they each hit smack in the yellow circle marking the center of the target.

Akin lost by one sixteenth of an inch, but didn&#8217;t seem to mind losing to Price.

"I&#39;m happy it came down to me and him," Akin said, smiling under a camouflaged ball cap.

Akin, who is assigned to a Wounded Warrior unit at Fort Hood, TX, has TBI, PTSD and a fused vertebra from an incident in Iraq in 2006 that he doesn&#39;t like to talk about.

The Army told him with his injuries "I couldn&#39;t do my job anymore" as a scout, so he&#39;s leaving the Army this summer, he said.

Before he got hurt he thought he&#39;d be in the Army for life. Now he is thinking about moving with his wife and four kids to Montana where it&#39;s quiet, uncrowded and "relaxing."

The Games are his last chance to really experience the camaraderie of soldiers working toward a common goal.

Akin had never done target archery until two months ago. But he is a bow hunter of "deer, hogs, whatever is in season," he said.

His commander knew this and recruited him for the Games.

Air Force Staff Sgt. Richard Pollock, who is in a wheelchair, competed next to Akin during the preliminary round. From his seat in the chair Pollock couldn&#39;t see the angle of his arrow, so he couldn&#39;t tell on his own if he was hitting the center or not.

After every shot, Akin would spot for him, letting him know whether it was a good shot.