Warrior Base training prepares medics to save lives under fire 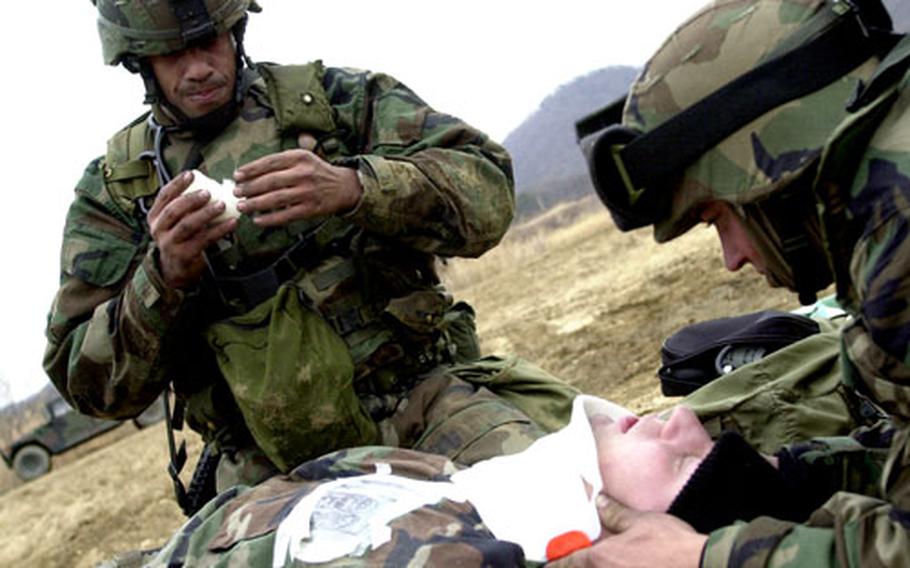 WARRIOR BASE, South Korea &#8212; A soldier walking through an open, low-lying field crumples to the ground.

His buddy runs across the field to aid him &#8212; and instead suffers the same fate. So does a unit medic, all victims of a sniper hidden in the hills.

Medics assigned and attached to the 52nd Medical Battalion trained on that scenario at Warrior Base on Tuesday, and were to experience others before the end of the exercise this week.

Many of the 145 medics on the ground have never worked outside of a base hospital, let alone in a field under enemy fire.

While their hospital experience improves their lifesaving skills, it doesn&#8217;t prepare them to provide for their own security if they are deployed and find themselves targeted by small arms or roadside bombs.

That is why during this training, which began Feb. 23, some medics are crawling in the mud while setting up cover. Others find themselves doing unfamiliar tasks such as calling for fire and scouting while their teams recover and treat the wounded.

Setting up security, in some cases, may also mean a delay in arriving at a patient&#8217;s side.

There is a delicate balance between security preparation time and aid, medics say. But this training also has reinforced a simple concept: You can&#8217;t help anyone if you&#8217;re dead.

Soldiers were encouraged to remember that during Tuesday&#8217;s scenarios.

It&#8217;s an added element of pressure that soldiers like Pfc. Alyssa Wolford have never seen before.

Vehicle knowledge, equipment maintenance and communications all come into play when working in the field, she said.

Wolford, stationed at Tripler Army Medical Center in Hawaii, was one of 26 soldiers based in the United States who came for the training.

They are medics who are attached to the 52nd Medical Battalion during emergencies.

While learning the security aspects of field medicine, Wolford said, she was challenged physically in setting up operations in the field.

Others learned that exchanging patients between ambulances in a potentially hostile area is far more complicated than unloading a patient at the emergency room.

Despite the field differences, the core goal remained the same, said Spc. Alexie Thomas, of the 568th Medical Company at Camp Humphreys.