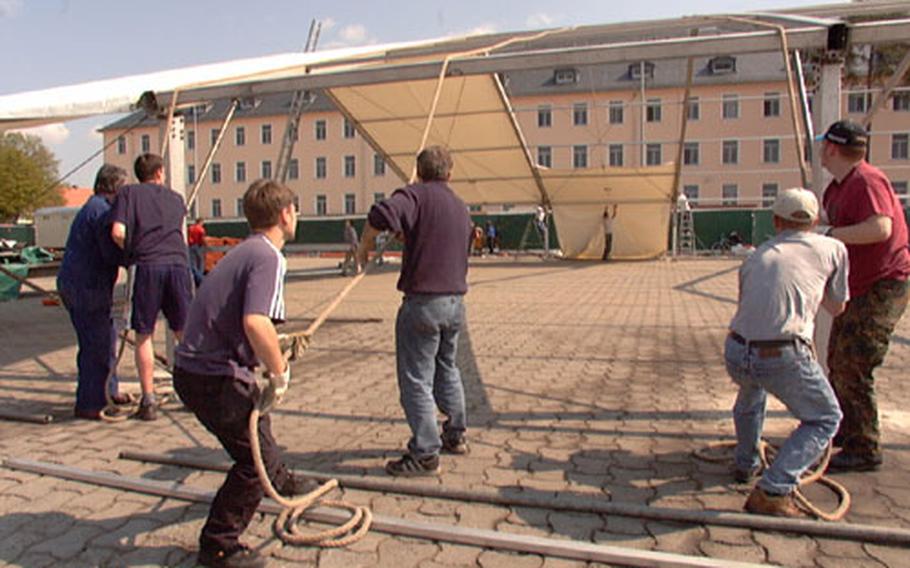 Workers pull sheets of canvas across the roof of what will be the beer tent for Warner Barracks’ German/American Volksfest on Tuesday. The fest begins Wednesday afternoon, and is open to the public. (Rick Emert / S&S)

Workers pull sheets of canvas across the roof of what will be the beer tent for Warner Barracks’ German/American Volksfest on Tuesday. The fest begins Wednesday afternoon, and is open to the public. (Rick Emert / S&S) 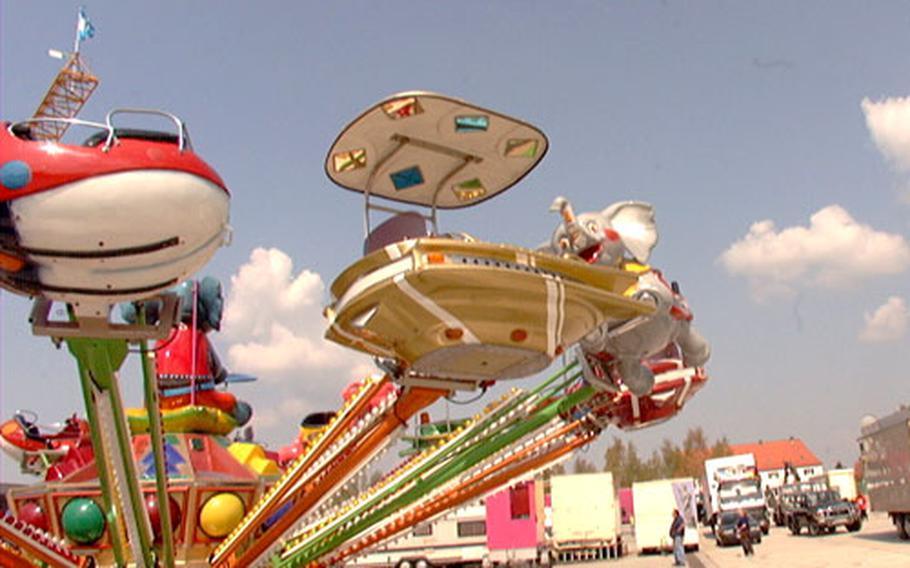 Workers begin to set up rides and booths for the German/American Volksfest at Warner Barracks on Tuesday. The festival takes place Wednesday through May 1 in Bamberg, and is open to the public. (Rick Emert / S&S)

BAMBERG, Germany &#8212; Although German and American relations remain tense in some areas and anti-war protests continue near some American military installations, in Bamberg the show will go on.

The annual Warner Barracks German/American Volksfest will go on as planned from Wednesday to May 1, according to Timothy Rucker, Morale, Welfare and Recreation special events coordinator for the 279th Base Support Battalion.

The event is open to the German public. In the past, Germans have made up about 60 percent of the fest&#8217;s attendees, Rucker said, adding that there is no way to gauge if that will be the case this year.

Attendance will certainly be lower among the Americans living on the installation, as about 1,000 soldiers from the community are deployed to the Middle East. However, the large number of deployments was one of the reasons the base support battalion and MWR made provisions to go ahead with the fest.

&#8220;We&#8217;re having our fest for two reasons,&#8221; Rucker said. &#8220;We want to continue to celebrate friendly German and American relations, and we want to give family members the opportunity to get their minds off of the deployments.&#8221;

Rucker said there will be heightened security for the event, and the fest was moved from its original location in the center of the installation to the more isolated 54th Engineer Battalion motor pool.

The motor pool is surrounded by a fence and can be blocked off from the installation. The site also allows for the public to be admitted through a separate gate without entering the installation.

The Schweinfurt military community recently held its volksfest, as well. However, many American military communities, including W&#252;rzburg, have opted not to hold a volksfest this year for various reasons, according to Charlemagne Tertulien, MWR business manager for the 98th Area Support Group, based in W&#252;rzburg.

In Bamberg, canceling the fest was never considered, Rucker said.