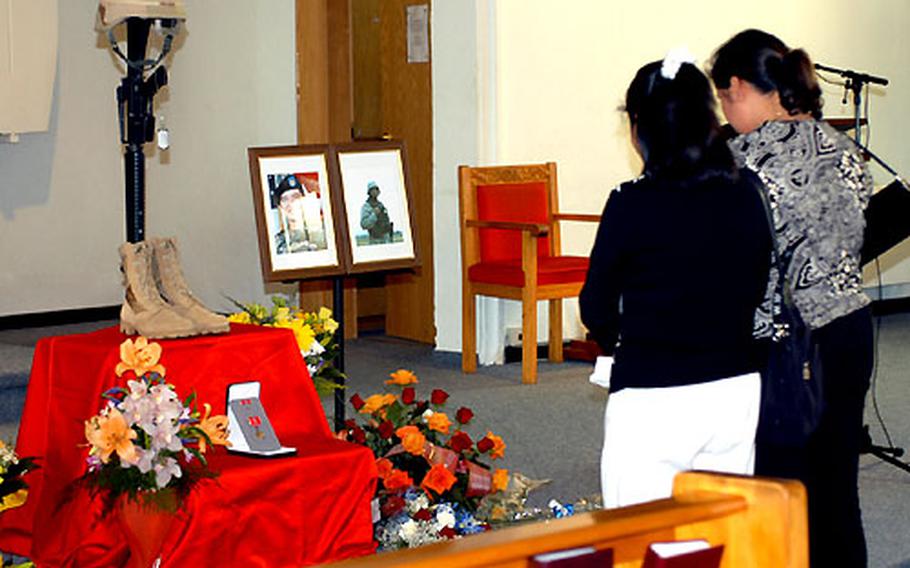 Mourners pay their last respects to Cpl. Marcos Nolasco during Monday’s memorial service at Warner Barracks in Bamberg, Germany. Nolasco died in Baji, Iraq, on May 18, in an electrocution accident. (Rick Emert / S&S)

BAMBERG, Germany &#8212; A memorial service was held Monday at Warner Barracks to honor a 1st Infantry Division soldier who was electrocuted May 18 in Baji, Iraq.

Hundreds of people filled the Bamberg chapel, with many lining the walls to pay their respects to Cpl. Marcos Nolasco, 34, assigned to 1st Battalion, 33rd Field Artillery Regiment. He served in the U.S. Marine Corps before enlisting in the Army in April 2002.

Those who knew Nolasco, of Chino, Calif., said he was a family man and an outstanding soldier and role model.

&#8220;We used to joke around and plan how later on in life we would have cookouts like old compadres do in Mexico,&#8221; said Sgt. Jose Tristan, in remarks during Nolasco&#8217;s memorial service in Iraq. Nolasco was born in Mexico.

Spc. Ryan Delaney said Nolasco looked for the good in everyone.

&#8220;He seemed to see a sparkle in everyone, a hope or some future only his mind&#8217;s eye could decipher, but he believed in me and he believed in you. &#8230; I never did say goodbye to that Marine from Okinawa or that poet from Mexico,&#8221; Delaney said in remarks at the service in Iraq. &#8220;A good man, a good Marine, an excellent soldier, it was an honor and a privilege to know you, we appreciated everything you have done for us and we remember.&#8221;

Nolasco was posthumously promoted to corporal and awarded the Bronze Star Medal.

He is survived by his wife, Mariko, and son, Angel.

The accident is under investigation.