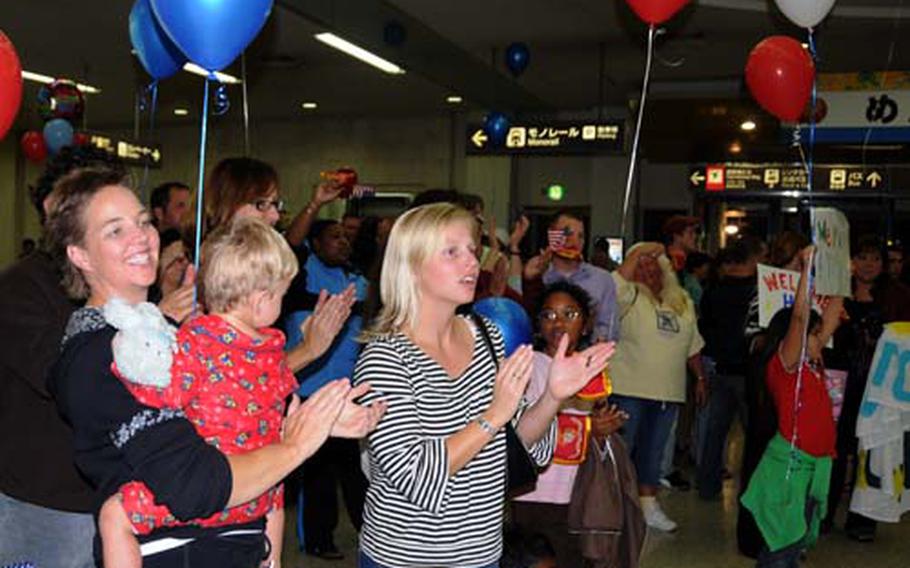 Teachers cheer as Marines, retuning from a deployment to Afghanistan, walk out of the Naha Airport baggage terminal Wednesday evening. The teachers, most from Bechtel Elementary on Camp McTureous, volunteered to provide individual greetings for the single troops who had no family on the island to welcome them home. (Cindy Fisher)

NAHA, Okinawa &#8212; For single troops, returning from a combat deployment can be a lonely experience.

With no family waiting on Okinawa, the most they expect is a handshake from fellow servicemembers and a bus ride back to their barracks, said some Marines who returned Wednesday night from a nine-month deployment to Afghanistan.

So Lance Cpl. Trent Endicott said he was pleasantly surprised when Angela Mora, a Bechtel Elementary School teacher, greeted him by name with hugs and gifts when he came out of Naha Airport&#8217;s baggage claim.

That was the goal, to show single Marines that they are appreciated, said Lori Haynes, who coordinated the effort to get volunteers like Mora to welcome the troops home.

Haynes&#8217; husband was deployed with Endicott and the other 3rd Marine Division troops who embedded with and trained Afghan National Army troops.

Haynes said it was "sad" that single troops usually have no personal welcome home.

She began campaigning for organizations, schools and churches stateside to send letters, gifts and banners of support to create gift bags for each of the returning single Marines.

But she wanted to do more and discussed her concern with friend Donna Apontes, a teacher at Bechtel on Camp McTureous.

Apontes said she immediately volunteered to come down and sent out the call to other Bechtel teachers to support the single troops.

That simple memo brought out enough teachers and their families to provide individual welcomes for all 17 of the single Marines in the group of 41 that returned Wednesday evening.

Susan Sullivan, a second-grade teacher, said coming down to greet the troops was the right thing to do.

"We always have Marines volunteering at our school," she said. "So it&#8217;s time we said thank you."

Air Force spouse and Bechtel teacher Tina LaMontagne said she went to the airport to welcome home the troops because many of her students have Marine parents.

Regardless of service, she said, it&#8217;s important to support all the servicemembers.

Being on hand was a little more personal for Mora, whose son is a Marine stationed stateside.

"I would hope someone would be there to greet him," she said.

"I think it&#8217;s a shame that we ask them to put their lives on the line and not have someone to greet them when they return."

Back from AfghanistanAbout 40 Marines returned Wednesday evening to Okinawa from a nine-month deployment to Afghanistan working with the Afghan National Army.

The Marines, most of whom deployed in February, were with two of seven embedded training teams under the Regional Corps Advisory Command, said Lt. Col. Don Carrier, the 3rd Marine Division operations officer, who was at Naha Airport to greet returning troops.

Dozens more from the remaining five teams are expected to return in the next few weeks, officials said.

Carrier said the work the troops did with the Afghan army was crucial.

But they need to be taught from the bottom up, Carrier said.

"Everything from tactics and operations to logistics and sustainment to leadership," he said. "They&#8217;re starting from scratch to turn them into a professional army."

The Afghan National Army currently has more than 55,000 soldiers, according to the Combined Security Transition Command Afghanistan Web site.

U.S. forces have been training with the Afghan army since 2001, and the United States has provided more than $2 billion worth of military equipment and facilities during that time, according to the Afghan National Army Web site.