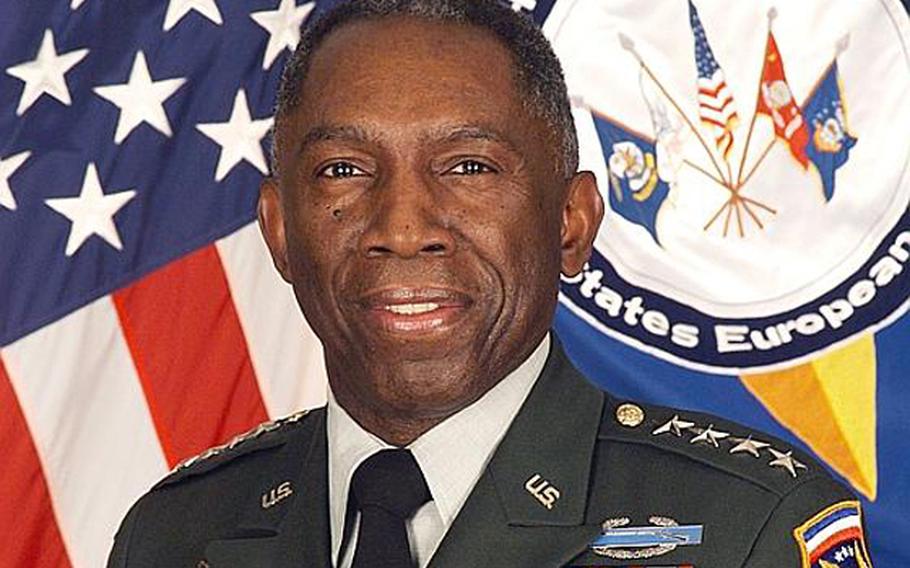 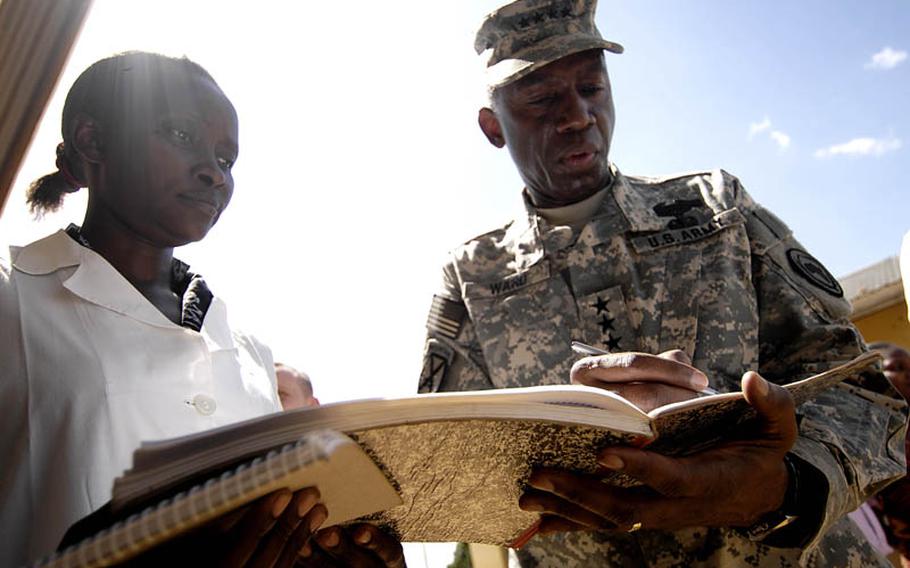 Army Gen. William "Kip" Ward, then the commander of U.S. Africa Command, signs a quest book during his visit to the Gulu District, Uganda, April 10, 2008. During the visit, Gen. Ward met with local leaders, representatives of the U.S. Agency for International Development and members of the 354th Civil Affairs Battalion. (Jeremy T. Lock/U.S. Air Force)

WASHINGTON - The former head of U.S. Africa Command, accused of misusing hundreds of thousands of dollars in travel funds, is unlikely to face court-martial but could see administrative punishments such as fines, a letter of reprimand and a reduction in rank, former military lawyers predicted.

Gen. William "Kip" Ward was the first head of Africa Command. According to a report by the Department of Defense Inspector General, during his tenure Ward was reimbursed for expenses for personal travel, took his wife on military aircraft "without sufficient justification" and allowed his wife to use a government vehicle without authorization. In addition, the inspector general reported, Ward spent $18,500 on mementos to give as gifts at his change-of-command ceremony, accepted free meals and tickets to a Broadway show from a prohibited source and committed other related violations.

Secretary of Defense Leon Panetta is expected to decide in the next few weeks whether to punish Ward.

Bringing a senior general officer to court-martial is an administrative challenge, but it's not impossible, said Victor Hansen, a retired Army judge advocate general and current law professor at New England Law Boston.

Jurors, called "members" in the Manual for Courts Martial, should not be junior to the accused in a court martial "unless this is unavoidable," according to the manual.

In 1999, a retired two-star Army general was recalled and admitted during his court-martial that he had committed adultery with the wives of four subordinates. Maj. Gen. David R.E. Hale was reprimanded and fined but not jailed.

In Ward's case, it might be a challenge to prove his actions meet the legal definition of fraud - an offense for which he could be court martialed - because the prosecutor would have to prove a level of intent, Hansen said.

However, Hansen said, Ward could be court martialed for an Article 92 offense - failure to obey an order or regulation.

And if Ward is not court-martialed, Hansen said, he could still face a variety of non-judicial punishments.

Greg Rinckey, a former Army JAG and current partner at Tully Rinckey PLLC, said Ward could receive a reprimand and a fine and he could be forced to retire at the lower rank of major general, meaning a reduction in his retirement benefits.

Since Ward was reassigned because of the accusations and served in a job that did not require a three- or four-star general for more than 60 days, he legally reverted to major general last year. Retirement benefits are determined based on the last rank at which the person honorably served, so a retirement board could use the IG report or a letter of reprimand to determine that he should only receive benefits as a major general instead of a general, Hansen said.

The difference in pension benefits could mean Ward would lose more than $1.5 million over a 25-year period, according to the basic retirement formula and military pay charts.

Rinckey said that while Ward may get "the officer discount" - meaning a lesser punishment than an enlisted soldier might receive - he is unlikely to get off without any punishment.

"It's a considerable smackdown," Rinckey said, referring to the difference in retirement benefits between a general and a major general.

Still, he said, cases like this can spur distrust between the ranks.

If Ward is not prosecuted, Hansen said, some in the Army will likely believe he got a pass simply because he is a high-ranking officer.

"There is absolutely some legitimacy to that criticism," Rinckey said. "That being said, there are limits to how willing and how effective it is to court-martial someone of that rank."