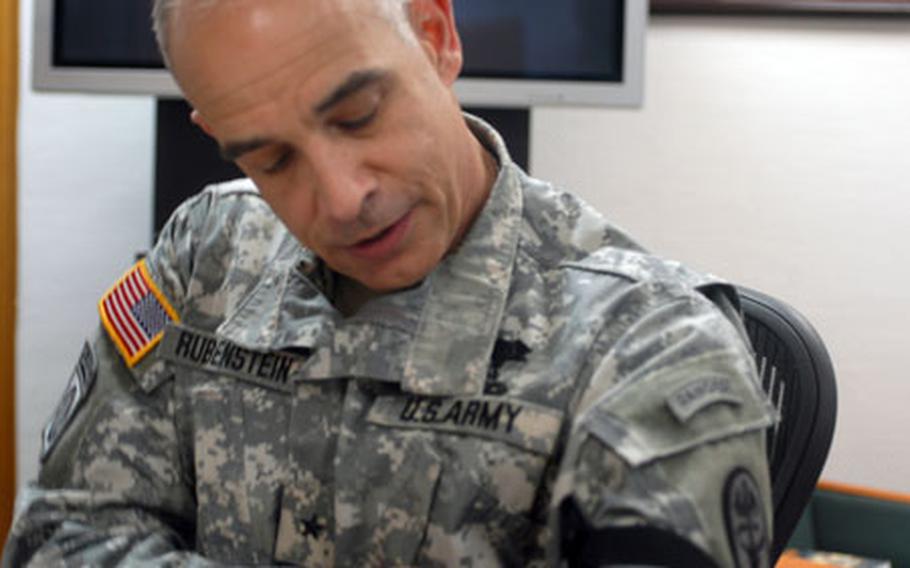 Brig. Gen. David Rubenstein demonstrates combat application of a tourniquet, which are being used more in Iraq than in previous wars to stop fatal blood loss, which Rubenstein said causes the most battlefield deaths. (Nancy Montgomery / S&S)

HEIDELBERG, Germany &#8212; For decades, anyone who took a first-aid class was taught ABC: clear the airway, ensure breathing, check circulation.

In the Iraq war, the highest percentage of the more than 3,200 total U.S. military combat deaths have come through roadside bombs. More precisely, the massive injuries the bombs inflict cause soldiers to bleed to death.

Better tools to stop bleeding is one of several important medical advances that have arisen because of the Iraq war, Rubenstein said. Others are improved prosthetics and a new way of successive surgeries, and treatment from in-theater to the U.S. (damage control instead of definitive repair).

There are new chemically-impregnated bandages, including one treated with a shellfish protein that helps blood clots form in terrible wounds or even arterial bleeds that don&#8217;t respond to pressure, he said. Another, called &#8220;Quikclot,&#8221; developed by a Connecticut-based pharmaceutical company in 2001, heats up the blood and causes cauterization, Rubenstein said.

The bandages, Rubenstein said, are already available in sporting-goods stores and catalogues.

Another change in treating dangerous blood loss is in how often tourniquets are used.

Previously, tourniquets were frowned on because if left on too long they resulted in tissue death and necessitated amputations. For instance, in one online source on first aid, readers are told: &#8220;Stop bleeding by applying firm pressure to the wound for about 15 minutes. Never use a tourniquet.&#8221;

In fact, the Army and Marine Corps in 2005 began distributing tourniquets to all servicemembers worldwide based on battlefield experience in Iraq and Afghanistan, according to news reports.

Tourniquet use was emphasized after a committee of military surgeons and medical experts urged the armed services to distribute the medical tool as the first course of treatment in combat. Without these new aids in stopping blood loss, Rubenstein said, &#8220;There would be more people dying.&#8221;