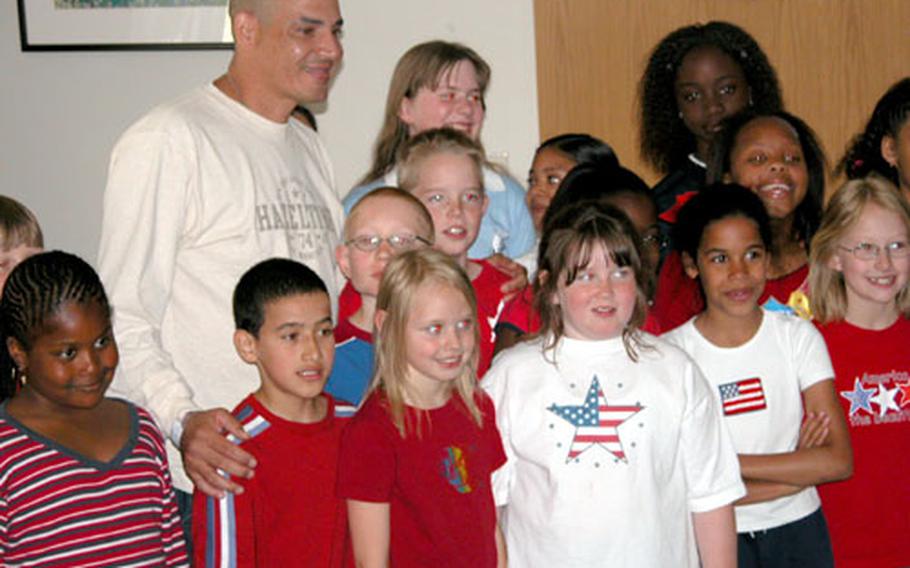 People eating lunch Friday at Landstuhl Regional Medical Center watched as little kids began to assemble in a corner of the cafeteria.

Two months ago, the 9- and 10-year-olds from Kaiserslautern Elementary School wrote a song for those wounded and injured in Operation Iraqi Freedom. Now the moment of truth had arrived.

Parents crowded in to take pictures. Most of the others kept on eating. John Keating started to strum his guitar. Kriner held up her hands like an orchestra conductor, then signaled the kids to sing.

The lunchgoers &#8212; nurses, doctors and other medical personnel &#8212; stopped eating and started listening.

So did they hit it?

Truth be told, the kids had a little help. Back in March, a visiting songwriter named Katherine Dines did a workshop with Kriner&#8217;s class.

The goal was to compose a song; the topic was a natural.

As the kids chirped out ideas for lyrics, she wrote them down on chart paper. Dines, the songwriter, helped hone some of the rhymes.

The students&#8217; proficiency did not surprise their teacher. Kriner said the boys and girls had for months been discussing the war and what it meant.

After a 40-minute playground break, the youngsters marched back into the Landstuhl cafeteria for another performance.

The plan had been to bring some wounded into the hospital&#8217;s auditorium and sing to them there, Kriner said, but that plan fell through. As the kids sang for the cafeteria crowd for a second time, a big guy near the front wiped away some tears.

&#8220;The way people are projecting their support &#8212; like the homemade postcards we received over there,&#8221; Martinez said. &#8220;Many times, I saw soldiers with tears in their eyes as they were reading them.

Heroes of the Battle

You were fighting in another landNo trees, no grass there, only desert landSo far from homeYou were all aloneWishing you could hold a loved one&#8217;s hand

You were missing family and friendsBut had Iraqi freedom to defendAnd after an attack,We had to bring you backBut still you would have fought to the end