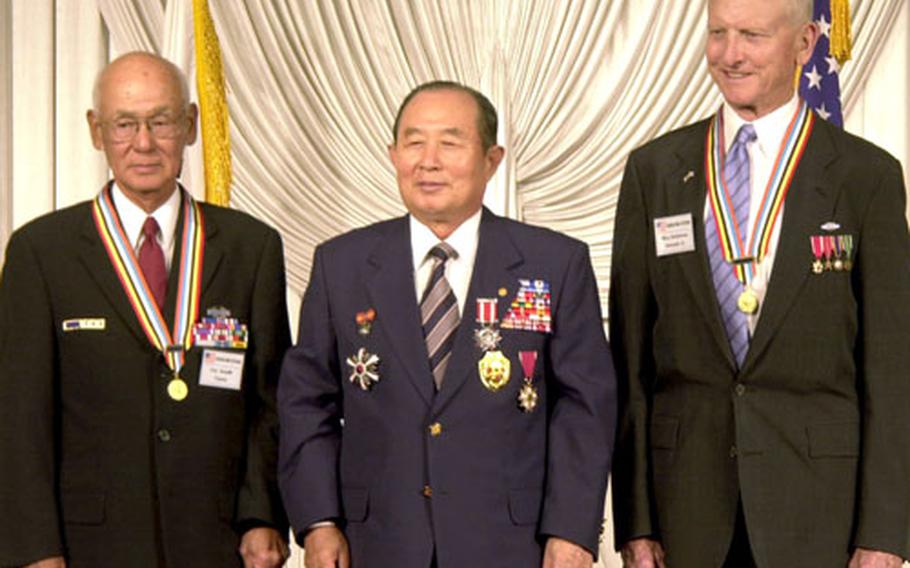 SEOUL &#8212; Ervin D. Lewandowski, one of 98 Korean War veterans and their family members in Seoul for a tour this week, managed to stand out from the rest of the crowd during a farewell dinner Tuesday night.

Like his fellow veterans, he wore the medals he earned and traded stories about long-ago battles. But Lewandowski, 72, was the only one wearing his original Marine-issue uniform, still sporting the sergeant chevrons.

He said he weighs the same today as he did more than 50 years ago: 130 pounds. The uniform earned him extra attention on a night when all the veterans were honored as returning heroes.

They were treated to a whirlwind five-day tour, including visits to the National Cemetery, the Demilitarized Zone and the Korean Village. They paid only for the round-trip airfare from the States. The Korean Veterans Association, led by chairman Lee Sang-hoon, a retired South Korean general, paid for everything else.

Lee and other guest speakers thanked the veterans for their service during the war.

&#8220;When the security of Korea was threatened by the communist North, you came to an unknown country and fought for the people you had never met before,&#8221; Lee said during his speech. &#8220;Without your noble sacrifice and contribution, [the] democracy and prosperity we enjoy today would not be possible.&#8221;

Many of the veterans said what struck them most on this visit was the incredible progress Koreans have made since the war ended.

Eugene Schmitt, who served 18 months with the 24th Infantry Division, remembers a devastated country, not the bustling metropolis he encountered this week.

His wife, Marilyn, said it was &#8220;great that they took the assistance and did something with it.&#8221; She said she thinks soldiers serving now in Iraq surely would like to head back to Baghdad in 50 years and find a similar situation.

Dohlman said the veterans were proud to be part of the history of Korea.

&#8220;We veterans may have helped create the opportunities,&#8221; he said, but the Korean people should take credit for rebuilding their nation. &#8220;What you have accomplished is beyond anything we could have imagined.&#8221;

Dohlman and retired Col. Toshio Aoyahi, a 3rd Division, 7th Infantry platoon leader in Korea from 1950 to 1951, received &#8220;ambassadors of peace&#8221; medals from Lee. After the brief ceremony, each visitor also received a medal at the dinner tables.