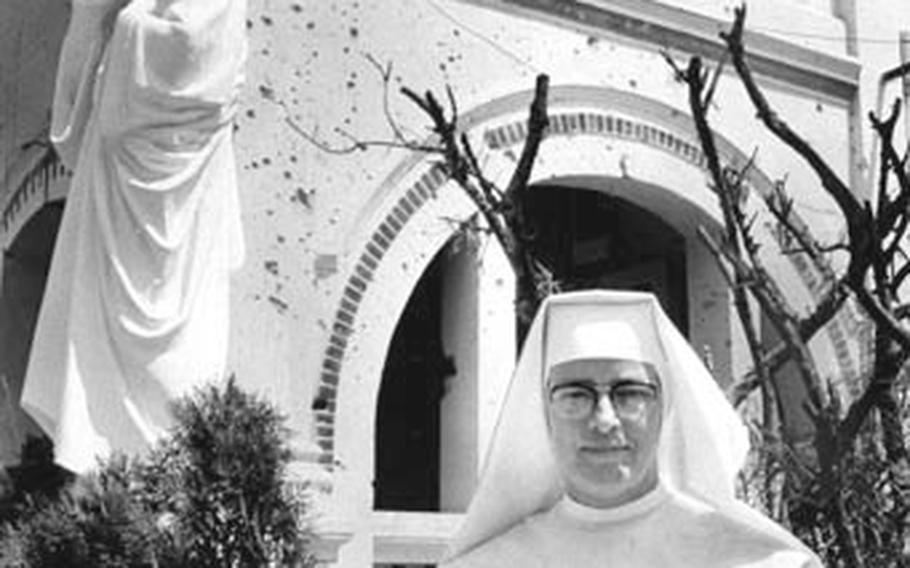 Buy Photo
Sister Mary stands in front of the bullet-riddled entrance to the convent and school she oversees near the U.S. air base at Vinh Long (Russ Anderson/Stars and Stripes)

VINH LONG, Vietnam &mdash; She was frightened and not ashamed of it.

Sister Mary isn't the type who scares easily. She has been in Vietnam for 10 years and has heard bullets flying above her more than once.

But it's never been like this for her, her sister nuns or the 100-plus occupants of her school of rehabilitation for girls.

The school buildings, once neat and stately, are now pockmarked with bullet holes or shattered from rockets and mortars. The girls, once smiling and busy, are now shocked and idle. Many have left.

Sister Mary is head of the school administered by eight nuns &mdash; five Irish, two Vietnamese and one Malay. There are more than 100 girls aged 9 to 16.

The school sits on a few hundred square yards of property bordering on the U.S. Army's Vinh Long AB.

"Several of our girls had to live with the Viet Cong before they came here," Sister Mary said. "They know how vicious and determined they are."

Then the Irish nun told the story that has her worried about the future:

"We have a new girl here. She told me that just before she arrived she had talked to a Viet Cong official who wore three stars on his uniform.

"He told her that the Viet Cong would liberate Vinh Long from the Americans. This was after Tet. Their major target was the air base and our convent would be in the way, he told her.

"The girl told him that we were good people and shouldn't be harmed. But he said our school would be the Viet Cong jumping off place for the attack on the base."

This is what happened during the Tet offensive and Sister Mary is afraid it will happen again.

"We have so little security here," she says. "The Vietnamese government is responsible for our protection but they only provide three soldiers. They are very brave soldiers. But only three."

It was an American helicopter pilot and crew who rescued the girls during the last Viet Cong attack on the convent.

(Miller has since been wounded and hospitalized with a shattered hand.)

Meanwhile, the convent's population has dwindled from 200 to a little over 100. Sister Mary said many of the girls were sent away for their own protection. "But they're starting to come back on their own," she says.

Asked if she feared: for the safety of herself and the other nuns, Sister Mary replied: "We have only to look at Hue."

The nuns are trying to get the school back to normal. Small repairs are being made so the girls can get back to their dormitories. They are now crowded into one small room.