War Stories: Staring down a truckload of death 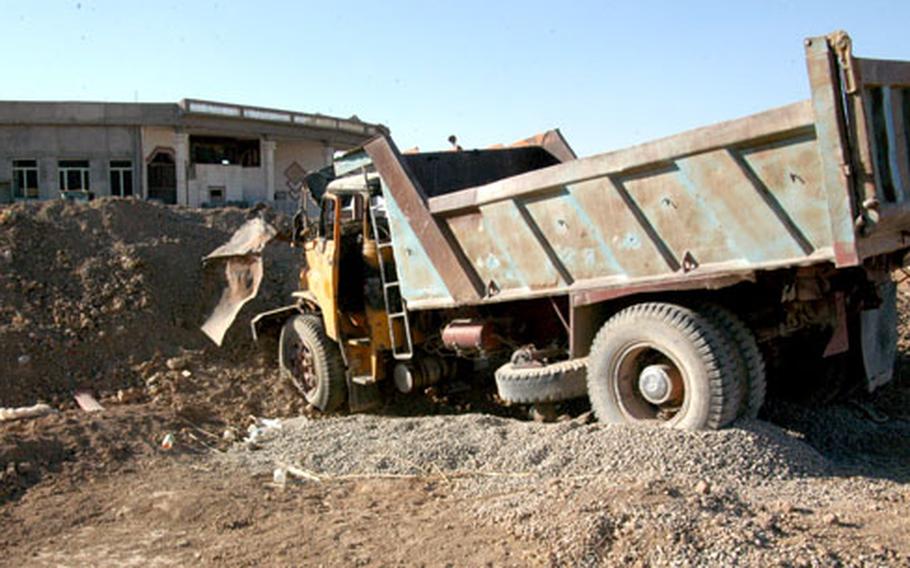 The dump truck insurgents used in a bombing attempt on Battle Position 1 near Hawijah, Iraq, sits next to the berm where soldiers stopped it Sept. 28. (Ben Murray / S&S)

The dump truck insurgents used in a bombing attempt on Battle Position 1 near Hawijah, Iraq, sits next to the berm where soldiers stopped it Sept. 28. (Ben Murray / S&S) 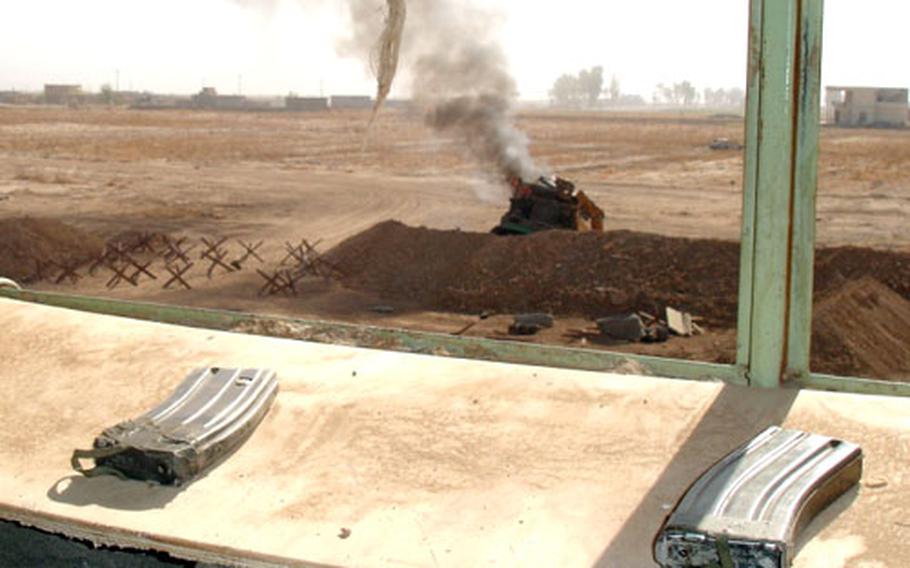 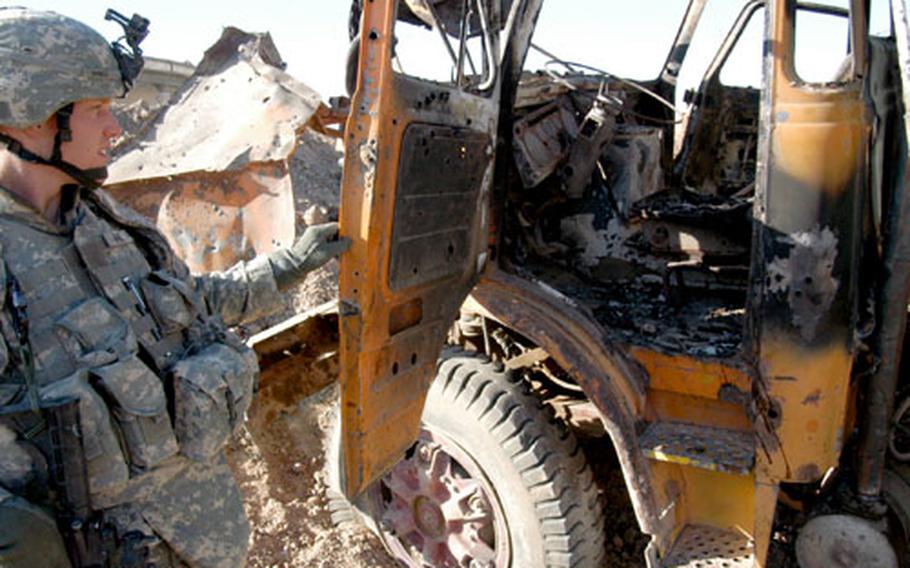 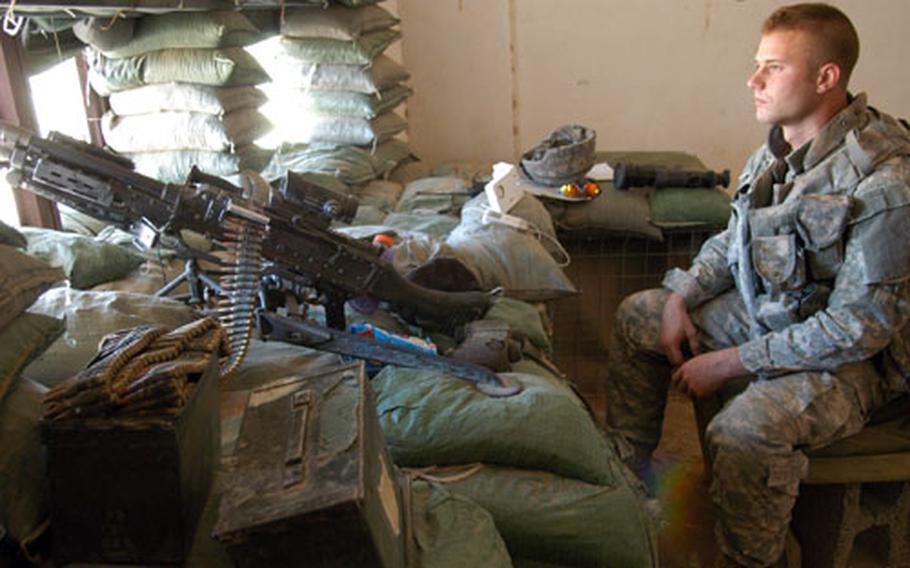 Spc. Jeremy Black sits at the gun position where soldiers in Battle Position 1 first engaged the 1,600-pound truck bomb that insurgents tried to detonate Sept. 28. Black took part in the sustained firefight that day, and eventually fired the AT-4 rocket round that helped bring the truck to a halt less than 100 yards from the building. No U.S. soldiers were hurt in the attack. (Ben Murray / S&S)

HAWIJAH, Iraq &#8212; The first mortar round that landed near Battle Point 1 fell well away from the sturdy little combat outpost, and at that point, there was little to worry about.

The austere, one-building compound near Hawijah often is the target of attacks, and the shot on Sept. 28 didn&#8217;t seem particularly well-aimed.

But two hours later, four more rounds crumped into the dirt much closer to the converted mansion, and suddenly the men of Company A, 2nd Battalion, 27th Infantry Regiment were in the biggest attack on American forces in the area in recent memory.

Within seconds of the mortars falling, a crew of insurgents pulled into view in a white pickup, jumped out and began shooting, their rounds thumping into the sandbags around the American gunners&#8217; positions.

Then, while soldiers shot back, the third element came into play. From a different direction, a big, blocky dump truck with an orange cab veered off the road and headed toward the position, bouncing over a dirt track that led to an access hole in the protective berm around the building.

Soldiers had been warned that suicide bomb attacks could be launched at them in the opening days of Ramadan, and they began shooting at the approaching dump truck. But it kept coming.

By the time it was over, soldiers on the ground had hit back with everything from M-4 machine guns and M203 40-mm grenades to shoulder-fired AT-4 rockets, while Kiowa gunships chased down the pickup and blasted it with 2.75-inch rockets.

Only later would soldiers learn that rolling towards them that day was a bomb big enough crumple the building and decimate the platoon inside. In the dump truck, under a layer of gravel, lay 1,600 pounds of explosives and 250 pounds of propane, all wired to a trigger in the orange cab.

Alone at the edge

Battle Position 1, a well-built, two-story home on the edge of Hawijah, is a satellite of Forward Operating Base McHenry, from which troops patrol the city and small towns amid thinly populated farmland southwest of Kirkuk.

Spacious and mostly empty on the first floor, BP1&#8217;s second story bristles with heavy machine guns and observation posts, while an Iraqi army unit mans a position on the roof.

It&#8217;s squat and well-defended, but it also sits alone just across the street from the perimeter of a decidedly hostile city, where grenade and sniper attacks are common, and five men have been killed in a little more than six weeks.

When the men in the white pickup began shooting at about 10 a.m. that day, Pfc. Diego Muro immediately returned fire and may have hit one of the gunmen.

It was Muro who also first fired on the dump truck, quickly followed by Pfc. Ryan Devine and then others, according to 1st Lt. James Vance. Soon, a number of troops were pouring automatic weapons fire onto the truck, including an Iraqi soldier who lifted his fixed machine gun from its mount on the roof and hefted it to the edge of the building to get an angle on the truck, burning his hands in the process.

The truck kept coming. Some 150 yards from BP1, something incapacitated the driver and possibly cut the wire to the bomb in the bed. Not far from the opening in the berm, it began to veer from its path to the access portal, blocked only by metal girders.

The truck then plowed into the earthen wall and began grinding toward the top, less than 100 yards from the building, where Spc. Jeremy Black finally took it out of commission with an AT-4 shoulder-fired rocket, creating a deafening roar in the building.

But the fight wasn&#8217;t quite over. Soldiers, aware that at least one gunman was in the bed of the truck with the explosives, continued to fire 40-mm grenade rounds at the vehicle. Minutes later, a lone man stumbled out of the back and was quickly shot down by the soldiers. The bomb never detonated.

While Company A was fending off the dump truck, another fight was being waged. The white pickup, which soldiers surmise was intended both to provide cover fire for the bomb and continued strikes after the detonation, was still in action.

Troops would later find several machine guns, hundreds of rounds of ammunition, hand grenades and rocket-propelled grenades, all stashed under a thin bed of eggplants.

By coincidence on the morning of the 28th, a pair of Kiowa Warrior attack helicopters from Troop C of the 2nd Squadron, 6th Cavalry, 25th Combat Aviation Brigade had just taken off from FOB McHenry when the call came in that BP1 was under fire.

It didn&#8217;t take long before they, too, were engaged in the fight, McGrew said.

The truck was quickly immobilized and the weapons seized.

In the end, the action around Battle Point 1 was a successful defense. Neither the soldiers nor helicopter crews suffered any wounds, and the toll they exacted from insurgents was heavy. At least three insurgents were killed and four others captured.

The margin was thin, however, and a week after the attack the burnt out hulk of the dump truck still sat wedged on the berm less than 100 yards from the building.

The reality of how close the platoon came to potential ruin didn&#8217;t really set in, Vance said, until the explosives were dragged several hundred yards away and detonated in thirds.

The explosion from just one-third of the bomb, he said, was so big its concussion could be felt hundreds of yards away.