War Stories: Medics recall their own close brushes with death in Iraq 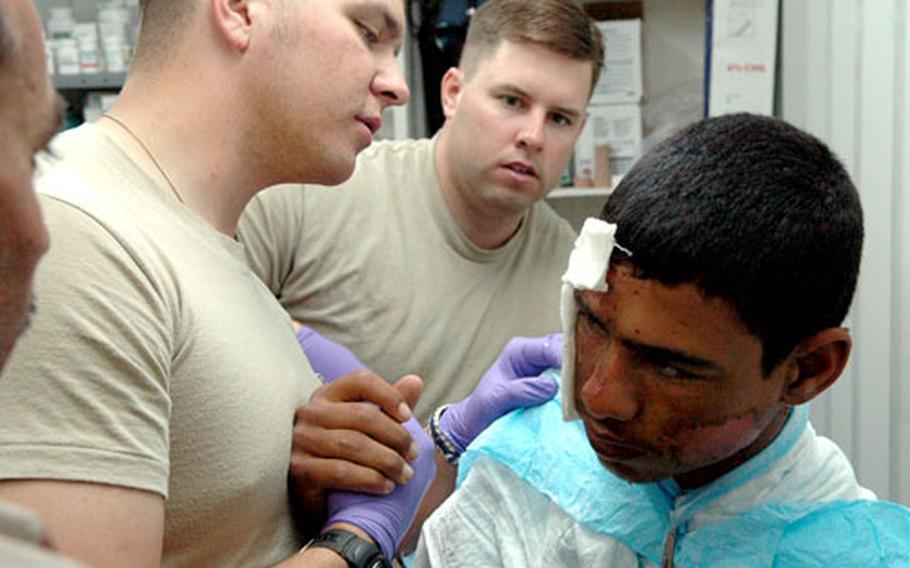 At least that&#8217;s what the two Army National Guardsmen were thinking right up until August, when they found themselves in the thick of two separate attacks just three days apart in Iraq&#8217;s notorious &#8220;Triangle of Death.&#8221;

Barron, of 1st Battalion, 108th Armor Regiment, 48th Brigade Combat Team, was one of many Georgia guardsmen who were initially deployed to the violent insurgent stronghold south of Baghdad &#8212; an area that includes Mahmudiyah, Latifiyah and Yusufiyah, otherwise known as &#8220;The Fiyahs.&#8221;

Three months into his first overseas tour, the 30-year-old father of three was attached to a platoon at a small outpost by a Euphrates River bridge dubbed JSB. Barron drew guard duty the evening of Aug. 12.

&#8220;As a medic you do everything everyone else does, that is until something goes wrong,&#8221; Barron said.

Barron, a civilian paramedic and firefighter, was standing on the roof of a building that served as the platoon&#8217;s quarters, observing the bridge, which was off-limits to traffic. The sun was just beginning to set when he noticed an approaching bongo truck.

Barron watched the truck bear down on him and noticed that the driver appeared to be a young man. When the truck barreled over the concertina wire at the front gate, Barron began squeezing rounds off from his M-16, shattering the front windshield. The suicide bomber was trying to ram the building that contained his platoon.

&#8220;I blasted his windshield and I remember seeing his body jerk forward and then go back. Then I saw the truck blow up,&#8221; he said.

With black smoke in his eyes, Barron felt the shockwave from the explosion. &#8220;I&#8217;ll never forget that wave, that blast that comes over you. Once I realized I was still alive, I kept shooting,&#8221; he said.

Only one soldier suffered a minor injury in the explosion, and Barron himself escaped unharmed.

Barron has since been nominated for a Bronze Star.

His fellow medic, Jackson, earned a different award three days prior to the bombing attempt. The 20-year-old Tulsa, Okla., native was awarded the Purple Heart for injuries he suffered on Aug. 9.

Jackson was sitting in the rear, passenger side seat of his Humvee, with his nickname &#8220;Bad Medicine&#8221; scrawled on the door. He was among a group of soldiers picking up an insurgent who had bombed some of the 108th&#8217;s tanks earlier. On the way, they drove headlong into a roadside bomb ambush set up by the insurgents.

Jackson and the truck commander, or TC, suffered the brunt of the explosion. At the time however, Jackson didn&#8217;t realize it, because he had been knocked unconscious. A chunk of shrapnel had blown through the side of the vehicle, bounced off his helmet, and ricocheted up through the roof of the Humvee.

When Jackson regained consciousness, he knew things were bad.

Jackson, whose armor and uniform were covered in blood, was pulled from the truck. As medics worked on him, he realized he couldn&#8217;t move his legs below his knees. Meanwhile, the TC was &#8220;screaming bloody murder,&#8221; Jackson said. The explosion had ruptured the vehicle&#8217;s battery beneath the TC&#8217;s seat, severely burning him with acid.

The next real scare, Jackson said, was when he was loaded into a Humvee and evacuated to a medical station. The Humvee was moving at 50 or 60 mph when it hit a river crossing soldiers call &#8220;Fat Boy Bridge.&#8221;

The Humvee made it though and Jackson was taken to a medical center. He&#8217;d lost a chunk of flesh from his right elbow &#8212; which now bears a wide dark scar &#8212; as well as his right kidney. He also suffered a broken back, broken ribs and a collapsed right lung.

After four months of treatment, Jackson was able to return to duty. The TC survived, but remains in medical care back in the States. Now, with the 48th BCT in more peaceful southern Iraq, Jackson and Barron find themselves treating local children and adults for burns, colds and other ailments at a free clinic, instead of treating the combat injuries they grew familiar with in the Triangle of Death.

Barron said he doesn&#8217;t miss his time up north, and fondly remembers stepping onto a helicopter in Yusufiyah and stepping off of it at Camp Scania.