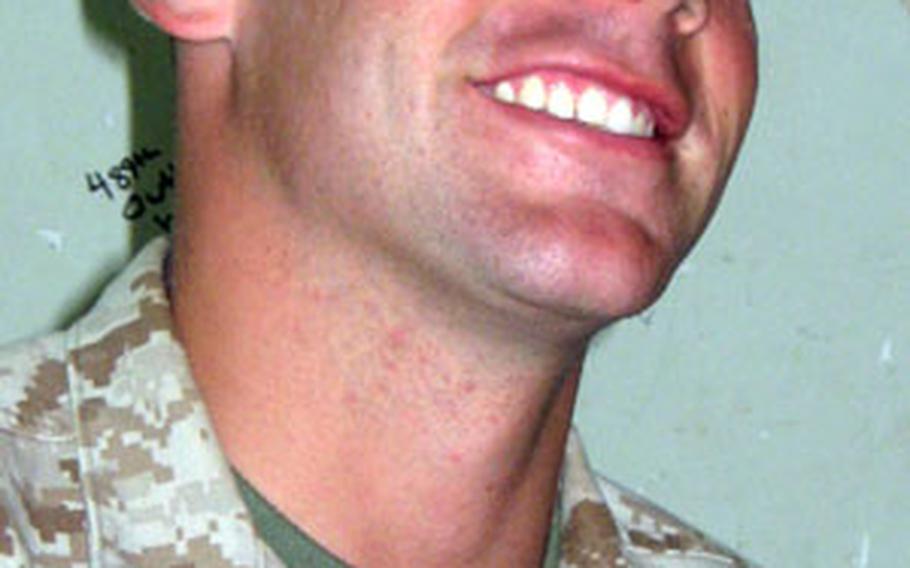 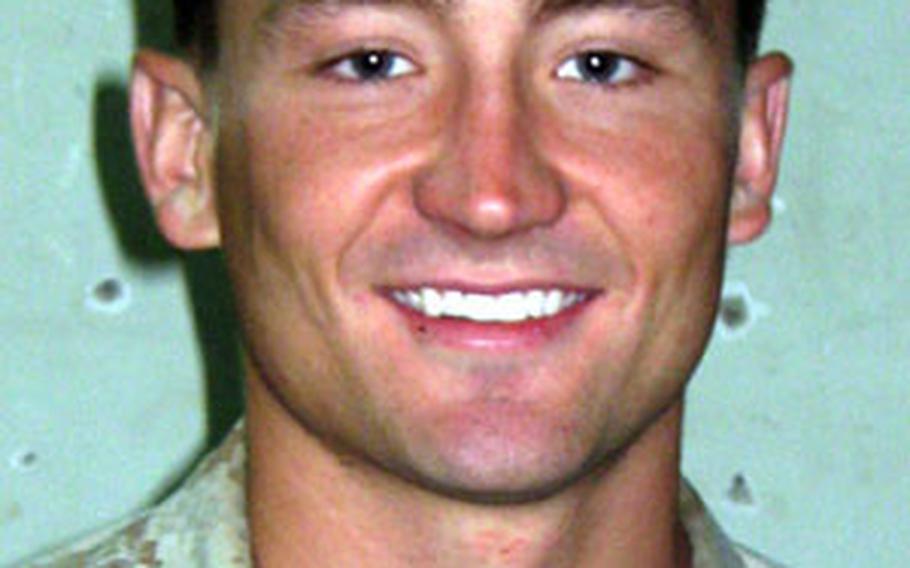 FALLUJAH, Iraq &#8212; The five-man reconnaissance team with 3rd Reconnaissance Battalion&#8217;s Company A was on a foot patrol in a remote area in the northern part of Anbar province one night this month when disaster struck.

"An explosion goes off and I can see a cloud of white smoke" and shrapnel flying everywhere, recalled Cpl. Tyler Van Hook, 20, an assistant team leader from Nokesville, Va.

That boom was a land mine.

Van Hook, the farthest from the explosion, was uninjured except for a ringing in his ears. He immediately dropped to a prone position and looked for additional hazards.

Then he heard someone screaming. It was Cpl. John Rice, 24, the team&#8217;s reconnaissance scout.

Van Hook said that is when the unit&#8217;s predeployment training paid off.

About a year ago, the recon Marines began learning tactical combat casualty care. The battalion received training with drills on how to assess battlefield injuries, treat broken bones and blunt trauma, apply tourniquets and pressure dressings and other self-aid, buddy-aid and corpsman-aid techniques.

Van Hook said that at the time, he thought the training was excessive. But now, in a situation where medical help was at least a half-hour away, he acted almost without thinking about what needed to be done.

"When everything happened, everything went into slow motion for me," he said. "Everyone else was going slow, and I was going fast."

As he crawled to Rice, Van Hook yelled to team leader Sgt. Darren Dugan, 24, to call for medical evacuation.

Then he began tending Rice&#8217;s wounds: an exposed-bone leg fracture, shrapnel wounds on both legs and one ankle and a concussion.

He remembers running his hands up Rice&#8217;s left leg and "my hands were full of blood."

He put a tourniquet as high on Rice&#8217;s leg as he could. Next, he cut Rice&#8217;s pants leg off and used a second tourniquet to further restrict blood flow to the wounds.

A sweep of Rice&#8217;s right leg also left Van Hook&#8217;s hands bloody. He cut the pants leg off and applied a tourniquet.

Sgt. Scott Redman, 22, the team&#8217;s point man, had shrapnel wounds in one leg and a concussion. He was "pretty shaken up" as he had been so near the blast, Van Hook recalled.

Despite his disorientation, Redman applied tourniquets to his own wounds and began helping Dugan and Cpl. Justin Hullett, 20, the radio operator. Both had concussions. Dugan had an entrance and exit wound through his upper thigh and on one heel. Hullett had several entrance and exit wounds on both legs and shrapnel in his hip.

Van Hook and Redman also had to get the team to a better location for medical evacuation.

Taking Rice, Van Hook said he "bear-crawled with him hugging me about 20 feet." After making sure the move caused no additional bleeding, Van Hook went to help the rest of the team.

Redman was trying to carry the more severely injured Hullett.

"Both were pretty much dragging" each other so Van Hook hurried to lend both additional support.

Hullett wouldn&#8217;t lie down and complained of pain. With a small chuckle, Van Hook recalled sweeping Hullett&#8217;s backside and finding "a shrapnel wound like Forrest Gump&#8217;s on his butt."

By this time, "we were pretty much out of medical supplies," he said. So he balled up his "boonie cover" and wrapped it with one of the few remaining pressure dressing so that he could better direct pressure to Hullett&#8217;s wound, he said.

"Doc really brightened up the situation by showing up," Van Hook said of Jacobson, who taught some of the casualty care classes.

"I was just overwhelmed at how much the guys had done by the time I got there," Jacobson said. "The blood loss was minimal."

Van Hook and Redman already had the others on stretchers and hooked up to intravenous lines, Jacobson said, as he turned to Van Hook and said, "I guess you were paying attention after all.

Redman was so busy caring for the others that Jacobson wasn&#8217;t even aware that he had been injured until the helicopter had arrived to evacuate them, Jacobson said.

Van Hook says that all the credit for what was done that July night goes to the corpsmen who taught his team what to do in that kind of situation.

But Jacobson was just as quick to credit Van Hook and Redman with saving their teammates&#8217; lives.

The four injured have been evacuated to the States for further treatment.