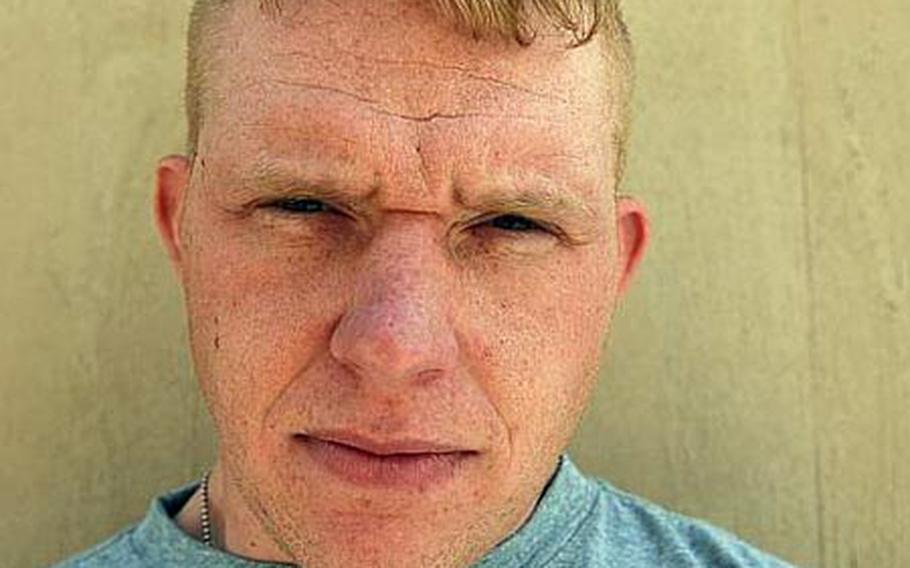 Not big as in fat. Big as in hauling tires. Big as in pulling cars. Big as in guy-you-don&#8217;t-want-to-mess-with. It&#8217;s not hard to imagine him heaving someone out a window.

But that&#8217;s getting ahead of the story, which actually starts on an Afghan ridgeline. He and other soldiers with Company A, 101st Airborne Division, Special Troops Battalion went to an out-of-the-way village in the Dandar area Thursday afternoon on the report that someone had hidden weapons in the area.

Once there, the soldiers and about a dozen Afghan soldiers and police hiked to a small group of homes on the side of a large mountain that one soldier called "[expletive] Mount Everest."

The unit had heard the home was booby-trapped, and its door was blocked. So Smith, a team leader, crawled through a window above a series of steep ledges to enter the home through an interior door.

Now Smith is no greenhorn. He&#8217;s a combat engineer who served in Iraq from August 2005 to December 2006. He knows a thing or two about explosives. So it should be no surprise that he could spot a thin piece of 550 cord conspicuously tied to a grenade in the door&#8217;s right-hand corner.

What&#8217;s perhaps more surprising is that he also spotted an 8-inch piece of wood on the ground in front of the door that looked suspiciously like a pressure plate used to set off a bomb much bigger than a grenade.

Smith straddled the wood, shined a flashlight through the slats in the door and spotted an artillery round about three feet behind the door. Looking closer, he also saw a box that appeared to be wrapped in detonating cord. He backed out and called the bomb squad.

When two of them arrived to take care of the explosives, Smith went back through the window, straddled the pressure plate again and shined his light on the booby traps for the bomb squad members.

Everything was fine until one of the new soldiers moved to go around Smith and accidentally put his foot inside the space Smith was straddling. It was a tiny movement but enough to make a big sound that an ad hoc bomb squad never wants to hear.

But there was also a big sense of relief. Smith and the other soldiers were all right. The pop must have been a blasting cap that hadn&#8217;t ignited the main explosive. It could have been a bad connection or it could have been on a time delay still waiting to explode.

"They could just as easily have been picking me and two [explosive ordnance disposal] guys up, figuring out whose legs were whose," he said.

One of the bomb squad guys told everyone to leave. Smith helped him out the window, but the other guy still was not moving, apparently frozen in fear.

Smith was the senior man on the team. In the instant after the pop, he knew that it was his job to get the junior soldiers out before he left himself. And that&#8217;s when Smith started heaving people out of the window.

He doesn&#8217;t recall doing anything besides helping the young guy, but that&#8217;s not what those outside the building saw.

"The adrenaline was pumping," he said. "The people who saw them come out said I was helping them pretty good."

With the other two out, he went out the window in a controlled roll, sticking his left hand out to break his fall. The fast exit, though, dislodged some large rocks. A 100-pound boulder came down on his left hand while he was sliding down. When he took off his glove, the tip of the finger was held on by a thin bit of skin.

The booby traps convinced the bomb squad soldiers that the building was just too dangerous, so the Air Force dropped a pair of very big Joint Direct Attack Munition bombs on the building.

Medics were easily able to sew the tip of Smith&#8217;s finger back on, and his hands are as big as ever. But after Thursday&#8217;s incident, the biggest thing about Sgt. Smith is that he chose to be the last one out.

Smith&#8217;s unit has put him in for the Army Commendation medal with valor and a Purple Heart.