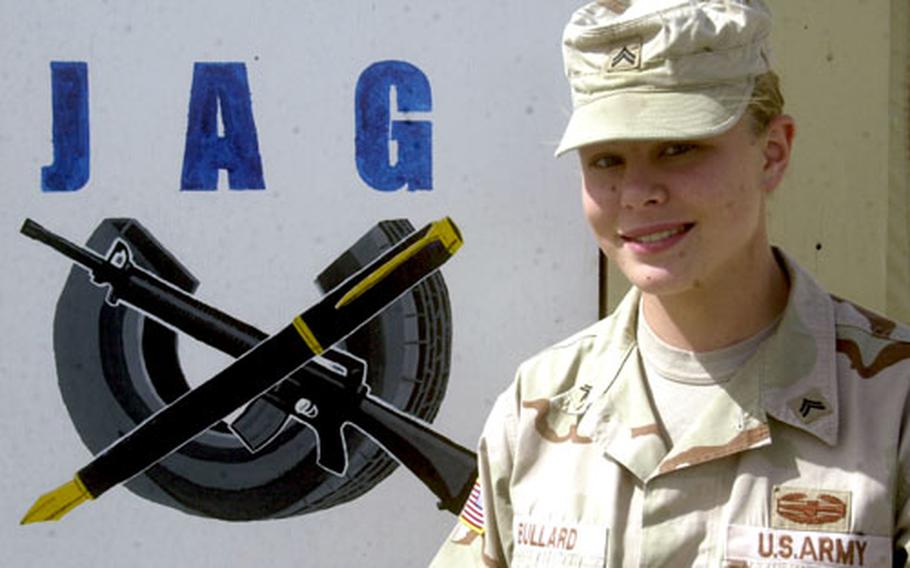 Army Cpl. Krista Bullard, a paralegal with the 37th Transportation Command out of Kaiserslautern, Germany, earned the Combat Action Badge in late January when she fired a .50-caliber machine gun during an ambush outside of Baghdad. (Steve Mraz / S&S)

Army Cpl. Krista Bullard, a paralegal with the 37th Transportation Command out of Kaiserslautern, Germany, earned the Combat Action Badge in late January when she fired a .50-caliber machine gun during an ambush outside of Baghdad. (Steve Mraz / S&S) 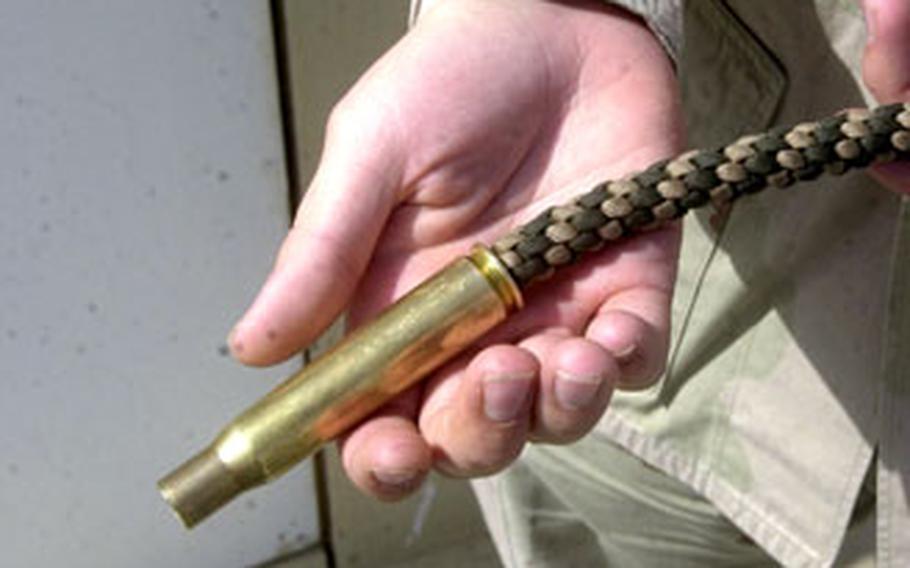 Army Cpl. Krista Bullard displays one of the 61, .50-caliber machine gun shells from a late January incident when her convoy came under attack. (Steve Mraz / S&S)

Army Cpl. Krista Bullard proved her combat mettle in late January when her convoy from Camp Arifjan came under attack close to Baghdad International Airport. Bullard, a private first class at the time, was the turret gunner in a Humvee when the enemy unleashed fire on her convoy at night. She returned fire with 61 rounds from her .50-caliber machine gun, causing secondary explosions at the enemy position. It was her first convoy manning a .50-caliber machine gun.

Bullard also garnered praise from the 37th Transportation Group command sergeant major, who was riding in the Humvee with Bullard on the night of the attack.

Prior to her deployment, Bullard had never even seen a .50-caliber machine gun, much less fired one. In fact, before Bullard joined the Army, the only weapon she had fired was a BB gun.

While on the convoy, Bullard admits, she was praying the whole time for nothing to happen.

Around 8 p.m., Bullard heard Baker, who was serving as truck commander in her Humvee, tell her that small-arms fire was coming from their 9 o&#8217;clock position. Bullard cranked the turret toward the position, located the enemy and told Baker she was going to return fire.

&#8220;I started firing,&#8221; she said. &#8220;That was definitely a nerve- wracking experience. As soon as they quit firing on that side, I could hear myself breathing in the intercom. It was just crazy. I never had that high of an adrenaline rush in my life.&#8221;

She had time to take a breath before Baker told her that enemy fire was coming from the 3 o&#8217;clock position.

The whole episode lasted around 10 minutes, and no one in the convoy was injured.