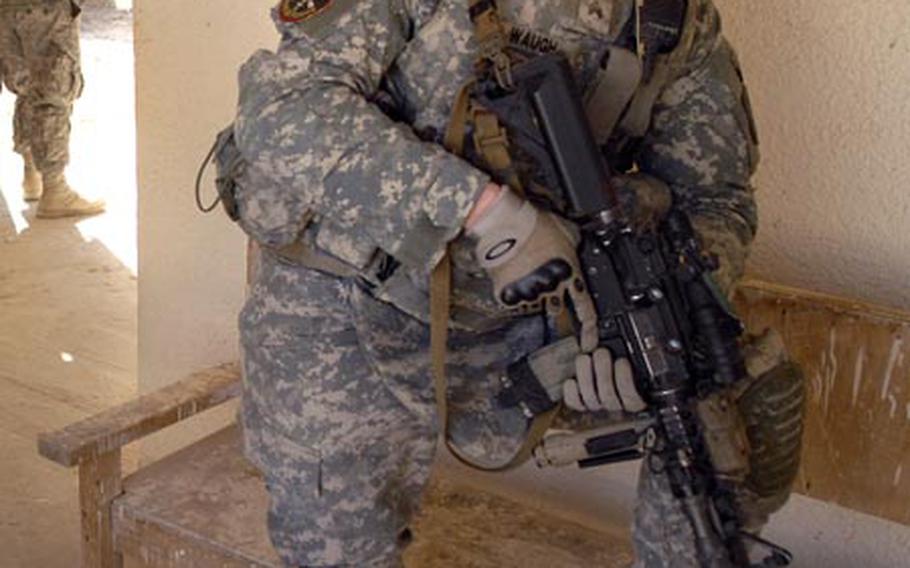 Sgt. Brandon Waugh, a soldier assigned to Company B, 1st Battalion, 2nd Infantry Regiment, watches as "Sons of Iraq" collect their final paychecks from the U.S. military on Tuesday near Iskandariyah, Iraq. Waugh is being considered for a battlefield promotion and an award for leading the successful medical evacuation of Sgt 1st Class Ammala Louangketh, Waugh&#39;s platoon sergeant. Louangketh was shot during a routine checkpoint stop Jan. 7th. Task Force 1-2 is deployed from Schweinfurt, Germany. (Ben Bloker / S&S)

Sgt. Brandon Waugh, a soldier assigned to Company B, 1st Battalion, 2nd Infantry Regiment, watches as "Sons of Iraq" collect their final paychecks from the U.S. military on Tuesday near Iskandariyah, Iraq. Waugh is being considered for a battlefield promotion and an award for leading the successful medical evacuation of Sgt 1st Class Ammala Louangketh, Waugh&#39;s platoon sergeant. Louangketh was shot during a routine checkpoint stop Jan. 7th. Task Force 1-2 is deployed from Schweinfurt, Germany. (Ben Bloker / S&S) 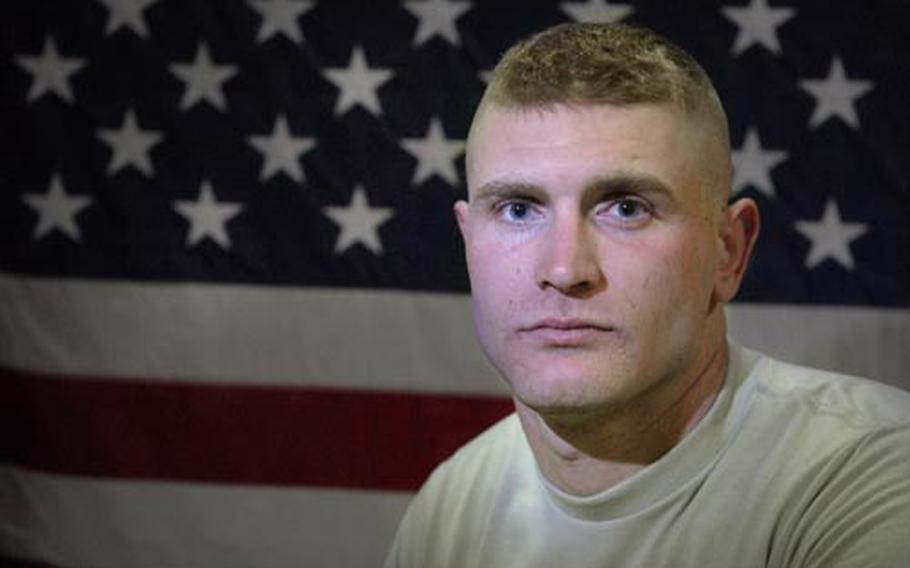 Sgt. Brandon Waugh poses for a portrait outside his flag-covered living space Wednesday at Patrol Base Hamiya. Waugh is being considered for a battlefield promotion and an award for leading the successful medical evacuation of Sgt. 1st Class Ammala Louangketh, Waugh’s platoon sergeant. (Ben Bloker / S&S)

HAMIYA, Iraq &#8211; Noticing that the "Sons of Iraq" checkpoints stood deserted, he felt something was amiss.

A combat veteran of a brutal tour in east Baghdad at the height of the "surge," he had an internal alarm that detected such discrepancies. It was around 11:20 a.m. Jan. 7 on a nameless road in Hanaswa in northern Babil province south of Baghdad.

For his actions that day, Army Sgt. Brandon Waugh, 1st Squad leader, 3rd Platoon, Company B, 1st Battalion, 2nd Infantry Regiment out of Schweinfurt, Germany, has been nominated for an award and will be promoted as early as possible.

Waugh&#8217;s vehicle was at a "Sons of Iraq" checkpoint about 150 meters ahead of the checkpoint where Sgt. 1st Class Ammala Louangketh, his platoon sergeant, was stopped. As Waugh peered through his weapon&#8217;s sighting system to look for the missing "Sons of Iraq," he heard gunshots behind him. Waugh was talking on his hand microphone trying to figure out what happened, running alongside his truck and guiding his driver who was backing up to the checkpoint where the shots had originated.

Louangketh had been shot three times in the leg by what is believed to have been a 17-year-old attacker. The attacker then tried to spray rounds at other soldiers nearby, missing them. He attempted to finish off Louangketh with a shot to the head, but his AK-47 jammed. Louangketh then took him out.

As the highest-ranking soldier on scene, Waugh took control of the situation. Waugh knew that soldiers seeing their platoon sergeant with rounds in his leg was not a good thing.

Over the radio, Waugh reported to higher headquarters that a man was down. Waugh cleared the room at the checkpoint and saw that the attacker had been fatally shot. The medic, Pfc. Nathaniel Hotz, applied two tourniquets to Louangketh&#8217;s leg. Waugh helped remove some of Louangketh&#8217;s gear.

He told the soldiers to get a stretcher so their wounded platoon sergeant could be loaded into an MRAP and driven to a landing zone they would have to establish. Hotz applied bandages to Louangketh&#8217;s wounds and started an IV. Louangketh began telling the soldiers who he thought should get his things if he didn&#8217;t pull through.

Waugh had figured out a map grid number where they could set up a landing zone and relayed it over the radio. He radioed over the standard nine-line medical evacuation request. He instructed the soldiers to mark the landing zone with the proper equipment.

The 23-year-old, who has been in the Army for just more than three years, was juggling relaying information over the radio to his platoon, his company, air support Apache helicopters, the medical evacuation helicopter and a quick-reaction force from his company.

The medical evacuation helicopter eventually picked up Louangketh and transported the wounded soldier.

"If it wasn&#8217;t for everybody, we would not have accomplished that goal," Waugh said. "A bunch of young soldiers arrived to a task."

Later that day, the soldiers visited Louangketh in Baghdad before he was shipped out. Waugh made sure to deliver the calendar Louangketh&#8217;s daughter made for her dad. Even wounded, Louangketh was telling the soldiers to continue to do a good job.

Waugh downplayed any possibility of a medal or promotion, instead focusing on the benefit to the platoon.

"If anything, it was more rewarding that I showed the soldiers that they have a leader they can rely on," he said. "I think a lot of them got the vision as far as, &#8216;OK, if I get hit, Sergeant Waugh and my guys will take care of me just like they did with Sergeant Louangketh.&#8217; ... We all worked together as a single working unit. Even though it was hectic, it went &#8212; as the Army saying goes &#8212; slow is smooth, smooth is fast."

Capt. Brian Weightman, Company B commander, said he has a couple guys like Waugh in the company and called him one of his personal heroes.

Waugh&#8217;s seen his share of combat from his last deployment with Company C, 1st Battalion, 26th Infantry Regiment. Fifteen of his best friends died and scores others were wounded during the deployment. His buddy, Spc. Ross McGinnis, was posthumously awarded the Medal of Honor for diving on a grenade.

"The thing you learn around here is to appreciate life everyday that you possibly can because you never know when it&#8217;s going to end," Waugh said. "Be thankful for today and hope for tomorrow."

Waugh has talked with Louangketh during his recovery, and continues to think about the platoon sergeant. Above the windshield in the Humvee that Waugh rides in is a constant reminder &#8212; the camouflage name tape of Sergeant Louangketh.