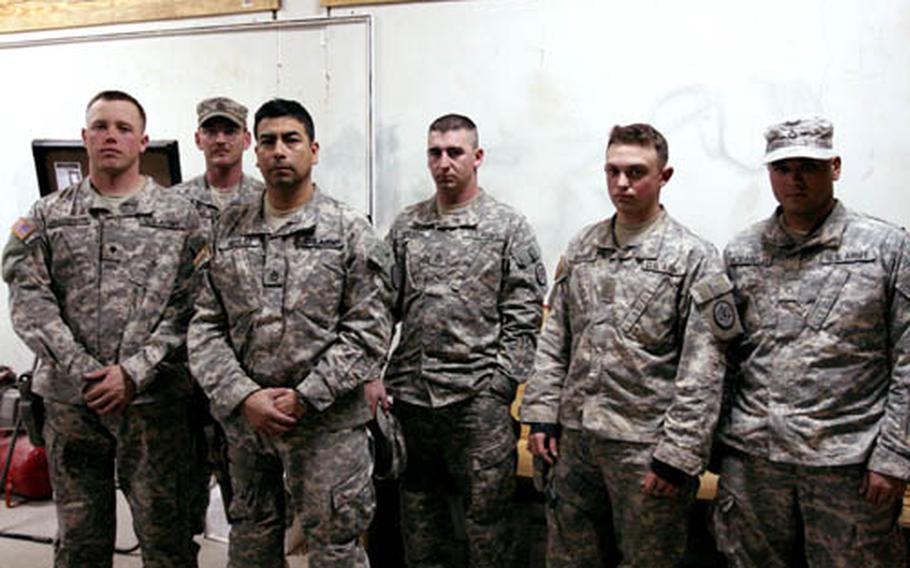 With just two armed companions, Deahim held off more than 60 U.S. and Iraqi troops in a firefight that lasted more than three hours.

He was killed by Iraqi police, but only after a U.S. helicopter shot a Hellfire missle into the cement block house where he and two other fighters made their last stand during the Jan. 16 gunbattle.

Even at that point, Deahim, badly wounded, managed to shoot one Iraqi policeman dead and wound two others before he and one fighter were killed by a point-blank blast of machine gun fire. The third managed to get away.

A month later, soldiers from Crazyhorse Troop, 1st Squadron, 3rd Armored Cavalry Regiment still speak of Deahim and the two other insurgents with a grudging respect.

Crazyhorse Troop knew it was up against a tough enemy even before the fight.

Deahim was the number-one figure on 1st Squadron&#8217;s high-value target list. An al-Qaida financier responsible for numerous attacks on U.S. and Iraqi troops, he was greatly feared in the Sharqat district as a brutal and ruthless killer. Reputedly, he had killed two sons of a high-ranking Mosul police official by burning them alive in the streets.

But in the end, Deahim&#8217;s savage cruelty caught up with him. A member of his inner circle ratted him out, revealing the location of his hide-out to an informant.

The day turned out to be a doubleheader for Crazyhorse Troop. They&#8217;d already killed Rothan Kahlif Abdul Karim, a cell leader for Jaish Islami, a Sunni nationalist insurgent group. A team led by Staff Sgt. Durango Ayala, 35, of San German, Puerto Rico, shot Karim dead after he pulled a rifle from his truck and refused to surrender.

It wasn&#8217;t long afterward that the soldiers got an urgent call from Iraqi police, saying they had surrounded Deahim in a house and needed backup.

Three Bradley fighting vehicles and a Humvee full of U.S. troops responded. As soon as the Americans arrived, the insurgents started hammering their vehicles with automatic weapons fire.

A Bradley manuevered into position to draw fire away from the Humvee. The soldiers shot back with .50-caliber machine guns and other automatic weapons. The insurgents stopped shooting. The Iraqi police told the Americans they thought the men in the house were dead.

Staff Sgt. Gene Spears, 28, of Panama City, Fla., and five other soldiers moved quickly inside. The first room, a prayer room, was empty. The team stacked in a hallway, and started to move up to the roof, where the insurgents had created a bunker. Gunfire broke out again.

The shots were single, well-placed and extremely loud. The insurgents were firing at them with a very large-caliber rifle. As soldiers outside covered them, Spears and his team got out of the house.

Chaos reigned. The Iraqis were running everywhere, shooting wildly. The Americans opened up with all they had.

Two snipers, Staff Sgt. Ron Aguilar, 39, of Midland, Texas, and Spc. Michael Jacobson, 24, of Janesville, Wis., took up positions behind a wall about 30 to 40 meters away with other soldiers. They started taking fire almost immediately from the roof. The rounds punched huge holes through the mud-brick wall.

Aguilar and Jacobson moved onto a nearby roof. They spotted one insurgent on the roof of Deahim&#8217;s hide-out. Aguilar hit one man in the chest with shots from his M-4 rifle. Jacobsen hit another with two 7.62 mm rounds from his Remington 700 sniper rifle. But the insurgents kept on fighting.

The shooting would rage for three to four minutes, then stop. The Bradleys fired several 25 mm high explosive rounds into the house, knocking gaping holes in the wall.

Spears and his team had taken refuge behind the mud-brick wall. Then they piled into a Humvee for protection. But all of the U.S. vehicles were taking fire. The single, well-placed shots from the large-caliber rifle were especially damaging. One round hit a Humvee window and shattered it, almost punching all the way through.

The fighting continued for more than three hours, with insurgents dishing out furious gunfire, and the U.S. and Iraqi troops responding.

U.S. troops finally called in an airstrike. A helicopter responded, firing a Hellfire missle into the house. The bunker on the roof collapsed. The rest of the structure was engulfed in flames.

The soldiers were sure the fight was over.

&#8220;After the Hellfire, we thought there was no way in hell those [expletive] could have survived through that,&#8221; Jacobson said.

But the three insurgents did survive.

U.S. and Iraqi forces waited another 15 minutes before the Iraqis approached the house, firing AK-47s and throwing grenades through the windows.

At some point, however, Deahim and one of the gunmen had slipped outside and taken refuge in a small makeshift bunker, about the size of a barbecue pit, behind the house.

As Iraqi police approached, one of the men shot a policeman dead and wounded two others before they were finally killed by machine gun fire.

Somehow in the confusion of the battle, the third insurgent &#8212; the one with the big caliber rifle &#8212; managed to get away. The U.S. soldiers never figured out what he was shooting at them.