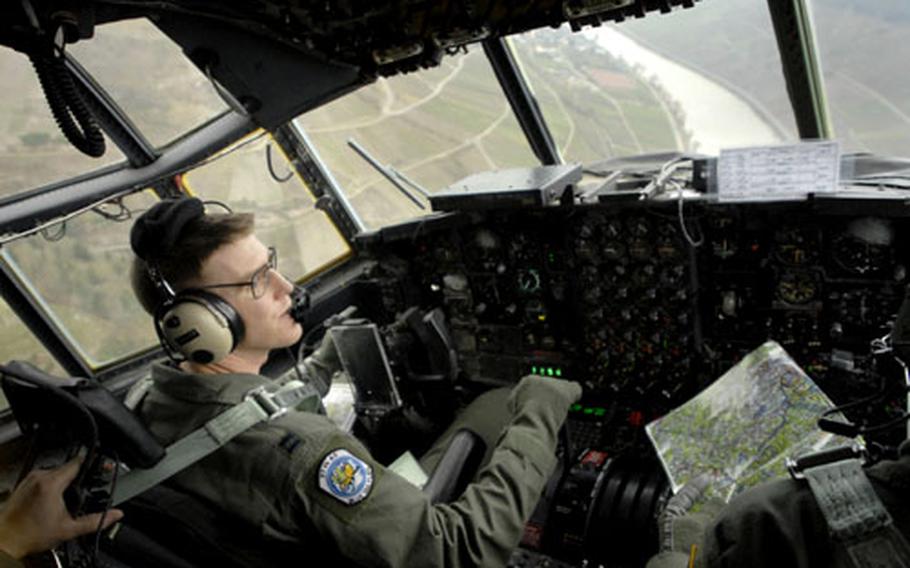 Capt. Kent Jensen, a pilot assigned to the 37th Airlift Squadron, flies a C-130 low-level through the Rhine River valley Jan. 25th, 2006, during a routine training mission out of Ramstein Air Base. This specific C-130 was built in 1963. (Ben Bloker / S&S)

Capt. Kent Jensen, a pilot assigned to the 37th Airlift Squadron, flies a C-130 low-level through the Rhine River valley Jan. 25th, 2006, during a routine training mission out of Ramstein Air Base. This specific C-130 was built in 1963. (Ben Bloker / S&S) 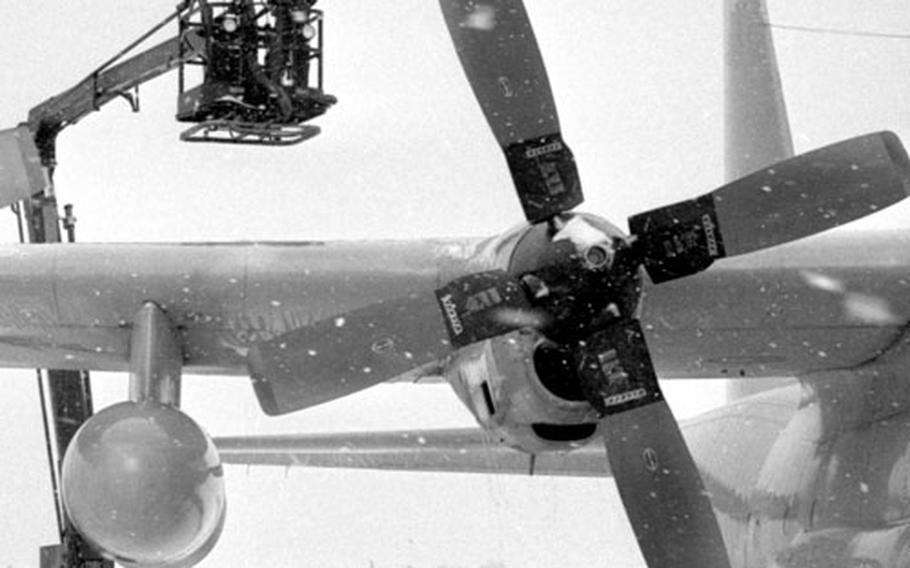 Senior Airman Rick Whitten of the 435th Organizational Maintenance Squadron clears away the ice from the wing section of a huge C-130 Hercules aircraft as the first storm of the season hits Rhein-Main Air Base in December, 1980. (Red Grandy / S&S)

Former Secretary of Defense Donald Rumsfeld got into hot water in December 2004 while talking with soldiers in Kuwait about a lack of armor-plated vehicles for troops in Iraq.

The same statement could have been applied to the Air Force then. And even more so three years later.

The planes operating in the skies over Iraq and Afghanistan while Rumsfeld was speaking are still in use today. Some were in use before he assumed the job the first time &#8212; in 1975.

The war on terrorism &#8220;clearly is putting hours on our aircraft, our mobility fleet, some of our tanker fleets,&#8221; said Col. Bruce Litchfield, director of logistics for Pacific Air Forces. &#8220;They are working very hard. That is something to be concerned about.&#8221;

Especially when some of the aircraft are older than the pilots and crews who support them:

&#182; The newest model of the KC-135 that keeps fighters and cargo planes supplied with fuel for long missions has an average age of 46.3 years. Add on another 2&#189; years for the oldest model.

&#182; The 86th Airlift Wing at Ramstein Air Base in Germany is one of the busiest movers and haulers in the service. But its C-130E transport planes go to work with an average age of 43. The C-130H model, based in the Pacific theater, averages a youthful 31.8 years.

Winslow T. Wheeler, who spent three decades working for U.S. senators and the General Accounting Office and is currently a subject-matter expert for the Washington, D.C.-based Center for Defense Information, said the Air Force has only itself to blame for its situation.

&#8220;The Air Force has done this to itself by allowing unit costs to get totally out of control,&#8221; he said Wednesday in a telephone interview. He said the service&#8217;s newest fighter jet, the F-22 Raptor, is costing about three times more per plane than it was supposed to.

Wheeler said the service&#8217;s current tactical fleet, though aging, has proven itself over the years. He said the service should spend its money on keeping those planes serviceable even though that could cost millions of dollars each time to fix airframes that are often well into their second decade of life.

According to a GAO report issued in 2001, current fighter aircraft are expected to make up 87 percent of the tactical fleet in 2011 and represent 24 percent of the tactical fleet in 2025. Those estimates were made using Air Force timelines and plans for the introduction of the F-22 and F-35. If fewer new planes are introduced or the timeline slips, the percentages would climb higher.

The Air Force proposed a budget of $117 billion for fiscal year 2009 in February. Gen. Michael Moseley, the Air Force Chief of Staff, asked for $18 billion more than that, mostly to pay for keeping the current generation of airframes operational.

The GAO report in 2001, for instance, projected just such a scenario. Addressing tactical aircraft used by the Air Force and Navy, the report said &#8220;over the next 11 years, the average age will continue to increase, especially in the Air Force.&#8221;

It&#8217;s beginning to seem that the report might have been conservative in its estimates.

But cracks have begun to appear in some of the fleet. Especially as the aircraft reach, and exceed, not only their initial life expectancies but projected flying hour maximums as well.

Many of the service&#8217;s F-15s worldwide were grounded after one of them broke apart in air in the States in November. C-130 models had to receive new wing boxes after cracks were discovered.

So why doesn&#8217;t the Air Force just replace older planes with newer versions of existing aircraft? Silvanic said the service does rotate planes with fewer flying hours to locations around the globe. But Europe, for instance, only sees a few replacement aircraft a year. The most recent arrival is a C-130E that came to Ramstein in February.

New models of most current airframes don&#8217;t come along because there are no new models. Of the various makes currently assigned to Europe, for instance, only the C-37, C-40, F-15 and F-16 are currently being produced.

The C-37 and C-40 are essentially military conversions of commercial aircraft. They&#8217;re among the newest planes in the Air Force and aren&#8217;t needed in large numbers. The F-15s and F-16s being built are designated for foreign markets only. The Air Force received its last F-16 in 2005 and took possession of the newest F-15 a year earlier.

Wheeler said the Air Force could decide to start paying for new F-15s and F-16s again if it wanted to.

Production lines on all other planes currently fielded in Europe have been shut down.

Still, new &#8212; or newer &#8212; aircraft are on the way and some have already arrived. Most new airframes will make their debuts in the States before they make their way overseas. That&#8217;s the case with the newest planes in the Pacific &#8212; all based in Hawaii or Alaska.

PACAF boasts C-17 Globemaster cargo planes with an average age of just more than four years. There are 20 F-22s now based at Elmendorf Air Force Base in Alaska. They are less than a year old on average.

The C-130E fleet at Ramstein will start getting replaced by C-130Js in 2009, according to the Air Force. Pending a final resolution regarding a contract awarded for new KC-45A refuelers, the KC-135 might start to disappear from bases such as RAF Mildenhall, England, in 2013. Maybe.

The Air Force said that although there are plans to bring next generation fighter jets to overseas bases such as RAF Lakenheath, England, Spangdahlem Air Base in Germany and Aviano Air Base in Italy, there is no timeline to do so.

Wheeler said that Air Force bases overseas might be closer to the fight &#8212; and thus logically the place for newer aircraft to be stationed. But he said it&#8217;s easier to sell Congress on new airplanes if they&#8217;re assigned to congressional districts in the States.

If the service reduces the number of newer aircraft it fields, fewer would be based abroad. Or, those in the current fleet already here might get even longer lives.