War on Terrorism medals to still be issued 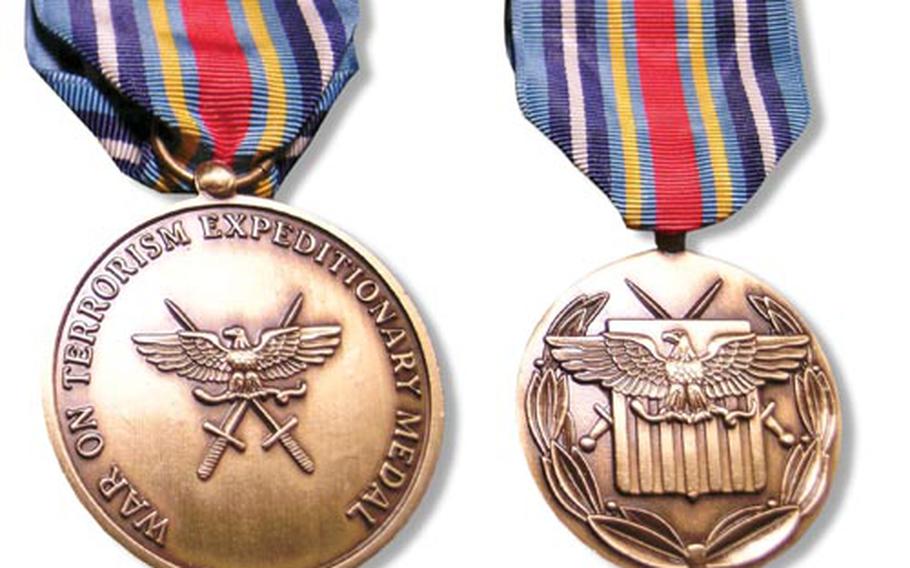 GRAFENW&#214;HR, Germany &#8212; The Department of Defense will continue to issue Global War on Terrorism medals to servicemembers, despite a debate within the Obama administration over whether the phrase "war on terror" should even be uttered by U.S. officials.

Secretary of State Hillary Clinton said last month, in widely reported comments, that: "The administration has stopped using the phrase ["war on terror"], and I think that speaks for itself, obviously."

There has been no directive to military personnel to stop using the GWOT phrase or to stop issuing GWOT medals, Lt. Col. Les Melnyk, a Pentagon press officer, said in an e-mail response to Stars and Stripes.

According to the Institute of Heraldry, the government office that administers military awards, there are three GWOT medals.

All members of the military, including National Guard and Reserve personnel, who have served 30 consecutive days or 60 non-consecutive days on active duty since Sept. 11, 2001, are eligible for the GWOT Service Medal, according to the Institute&#8217;s Web site.

The GWOT Expeditionary Medal was initially awarded for service in Iraq and Afghanistan.

Personnel who served in those theaters before April 30, 2005, remain eligible for the award.

However since that date, the military has awarded Iraq and Afghanistan campaign medals instead of the Expeditionary Medal, the Web site states.

The medal is still awarded for service in dozens of countries other than Iraq or Afghanistan, including in Saudi Arabia, Pakistan, the Philippines and Romania, the Web site states

The time requirement is waived if personnel are in combat involving grave danger or if they are wounded or injured in action and taken out of the theater by medical evacuation, the Web site states.

"The medal may be awarded posthumously to any soldier who lost his/her life while, or as a direct result of, participating in Global War on Terrorism Operations, without regard to length of such service," according to the Web site.

The GWOT Civilian Service Medal is for Department of Defense civilians who have served abroad in direct support of the U.S. military in combat zones since Sept. 11, 2001, the Web site states.