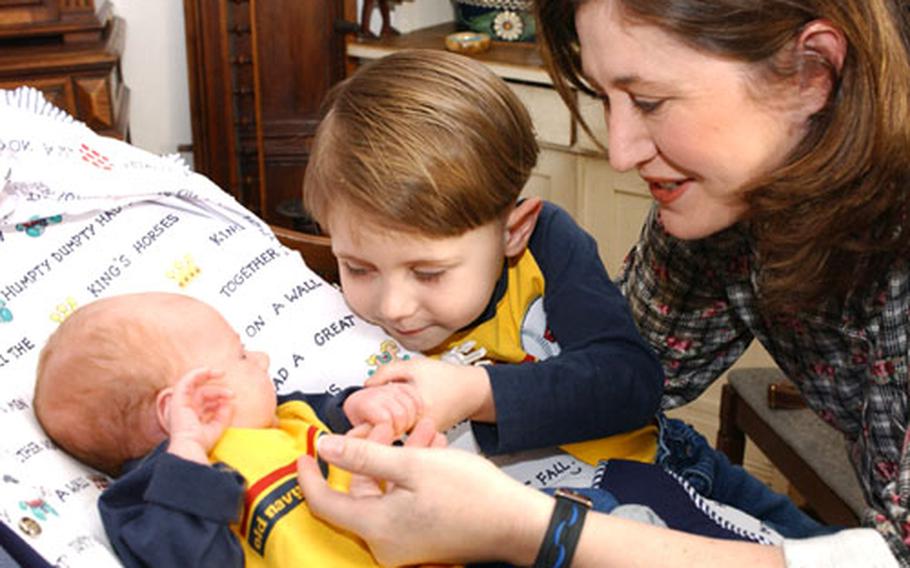 Angie Tabat and her first son, Nile, test the grip of her second son, Riley, born a month ago in a German hospital in Amberg. (Courtesy of U.S. Army)

Many Americans affiliated with the U.S. military look on their tours of Europe as a chance to experience the culture of another country.

But getting an opportunity to see how the local medical system operates usually isn&#8217;t high on that wish list.

&#8220;I was absolutely terrified,&#8221; said Angie Tabat, who gave birth to her second child in February at a German hospital in Amberg. Her first son, Nile, was born in the States.

In fact, Tabat, an Army spouse who lives in Vilseck, considered commuting to the Army&#8217;s hospital in Heidelberg &#8212; more than a three-hour drive away &#8212; rather than see a German physician.

She was talked out of it. And today, after son Riley joined the family, Tabat has nothing but positive things to say about the experience.

Those are the kind of words officials from the Europe Regional Medical Command and Tricare, the company that provides medical insurance to many Americans in Europe, want to hear.

If the United States goes to war with Iraq, at least some medical personnel will follow those fighting to the Middle East and some U.S. facilities will be used to treat casualties from the conflict.

As a result, some military medical facilities might see only active-duty servicemembers, referring all others to facilities outside the gates. And at least some servicemembers could get directed elsewhere, too.

However, much of that treatment has come from specialists, such as cardiologists Leonard Shapiro, a British doctor who has a practice in Cambridge, and Bruno Ricciardelli, an Italian who works at the Clinica Mediterranea in Naples. Or Gheorge Levi, a German specialist who treats a lot of American children in Hanau.

Especially when there are qualified local doctors who can provide the care.

Two American patients who have recently seen the British doctor offer nothing but praise.

Donna Reddick, who works in resource management for the 48th Medical Group at Lakenheath, said she first saw Shapiro when he was pushing a woman in a wheelchair to her car in the parking lot.

She said she thought she had more interaction with Shapiro than she&#8217;s had with some doctors in the States and &#8220;he was a little more friendly than a lot of the American doctors I&#8217;ve met.&#8221;

Famita Avila, who also works for the medical group at Lakenheath, had a similar experience.

For his part, Shapiro says American patients are generally pleasant to work with, and he attributes their respectful nature to being associated with the military.

It wasn&#8217;t Avila&#8217;s first visit to a foreign medical facility. Her Air Force husband, now assigned to RAF Mildenhall, had previously been stationed at Lajes Field in the Azores.

&#8220;I never had a bad experience there, either,&#8221; Avila said. In Lajes, where Portuguese is not spoken by most Americans, the base sends patient liaisons &#8212; generally local nationals who also speak English &#8212; to help with the language barrier.

That&#8217;s the case in most countries in Europe where American troops are stationed. It&#8217;s the worry over communication &#8212; and the quality of care available &#8212; that have many American patients worried.

Casey said a four-hour consultation with his German doctor, in English, &#8220;took away all my apprehension.&#8221;

He said his wife was treated well when she visited him and he gave high marks to the general care he received.

Levi said he doesn&#8217;t see many differences between American and German patients.

But there are a few nuances.

Levi said he interacts with patient liaisons when there&#8217;s a need, but &#8220;more or less, I don&#8217;t need them.&#8221; He said the biggest problem that medical staff in his facility have is adjusting to an American accent. Many of them learned the Queen&#8217;s English.

There may be fewer Italian doctors who speak English, which is true of the general population. But Ricciardelli said that medicine in much of Europe and the United States is pretty similar.

Many Italian doctors are members of international associations where English is the common language, and there are also many of them who have some training in England or the States.

He said if he were asked to give a message to a prospective American patient, his response would be &#8220;that it will be OK for you. I would say the same thing to an Italian patient who went to the U.S.,&#8221; he said, laughing.

Lt. Cmdr. Mark Weaver, a Naples military hospital administrator, didn&#8217;t expect language to be a problem when he needed emergency surgery. He&#8217;s been married to an Italian for more than 20 years. He had angioplasty performed in the Naples hospital where Ricciardelli works.

Weaver said he noticed some differences between the ways Americans and Italians do business, but says his care was more than adequate.

Weaver said a large window in his room gave him a good view of the city and Mount Vesuvius.

But military medical officials don&#8217;t expect patients to see their trips to local treatment facilities as vacations. Rundell said it&#8217;s likely that not all Americans will have positive experiences. But he said that&#8217;s also true for those seeing doctors in the States.

All of those providing care in the network have been screened and are periodically reviewed by medical officials, he added.

Weaver&#8217;s advice to someone who might be in the situation he was in?

If appointments at U.S. military medical facilities in Europe became scarce or nonexistent due to a conflict in Iraq, patients are still advised to use their local bases to help with their medical needs.

Bases that are either short-staffed or dealing with casualties of war will refer patients to other American facilities or doctors on the economy.

Air Force Dr. (Col.) James Rundell, Tricare Europe medical director, said medical officials on base have contacts in local communities and will refer patients to someone who is a part of the company&#8217;s Preferred Provider Network.

Often, they can schedule appointments or send patient liaisons if there&#8217;s a language problem.

Rundell said there&#8217;s a patient liaison in the network in every country in the U.S. European Command theater of operations. And Tricare Europe is also responsible for the U.S. Central Command&#8217;s area. So there are also representatives in the Middle East.

Rundell said it&#8217;s a good idea for Tricare insurance customers to try to get medical treatment at approved facilities, even when they&#8217;re away from base on leave. Tricare has booklets listing approved medical care facilities that it gives out to new customers.

He also said that not all Americans in Europe would likely be affected by a medical crunch.

And Tricare customers have another option that doesn&#8217;t require them to leave their homes.

The company has a toll-free help line manned by nurses around the clock to answer questions and provide advice. Sometimes, a phone call will save a trip to the doctor altogether.

The number varies between countries; check Tricare&#8217;s Web site at www.tricare.osd.mil for the one you need.