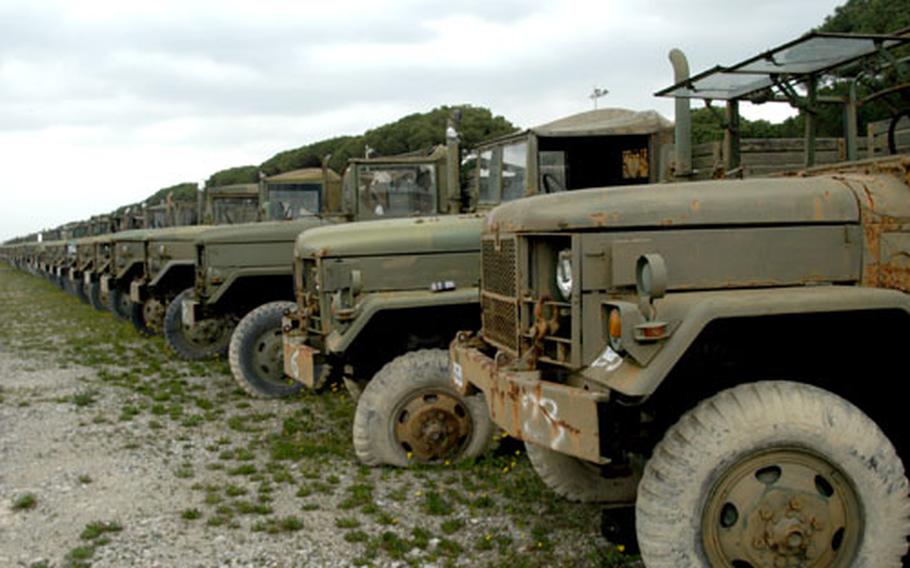 U.S. Army trucks from previous wars are stored outdoors at Field Support Battalion- Livorno, Italy, until they are sold to other governments. (Russ Rizzo / S&S)

U.S. Army trucks from previous wars are stored outdoors at Field Support Battalion- Livorno, Italy, until they are sold to other governments. (Russ Rizzo / S&S) 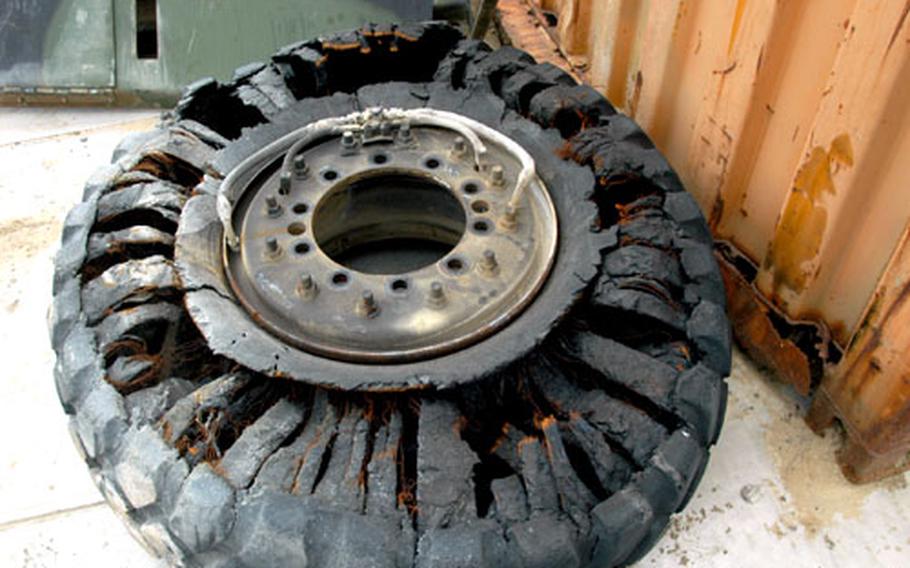 Mechanics at the Field Support Battalion-Livorno, Italy, will repair this wheel, taken off of an eight-wheel Pallet Lifting System that arrived from Iraq, and send the vehicle back to war. (Russ Rizzo / S&S) 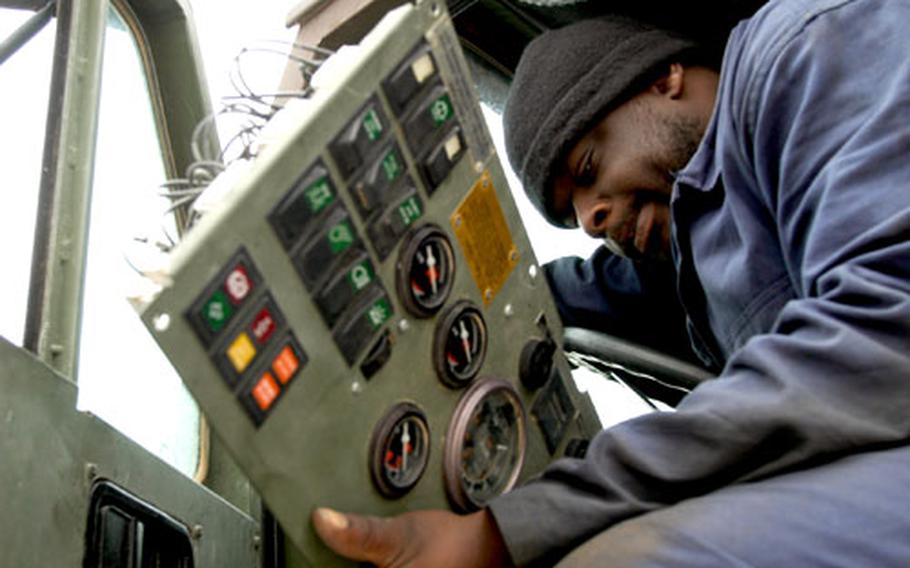 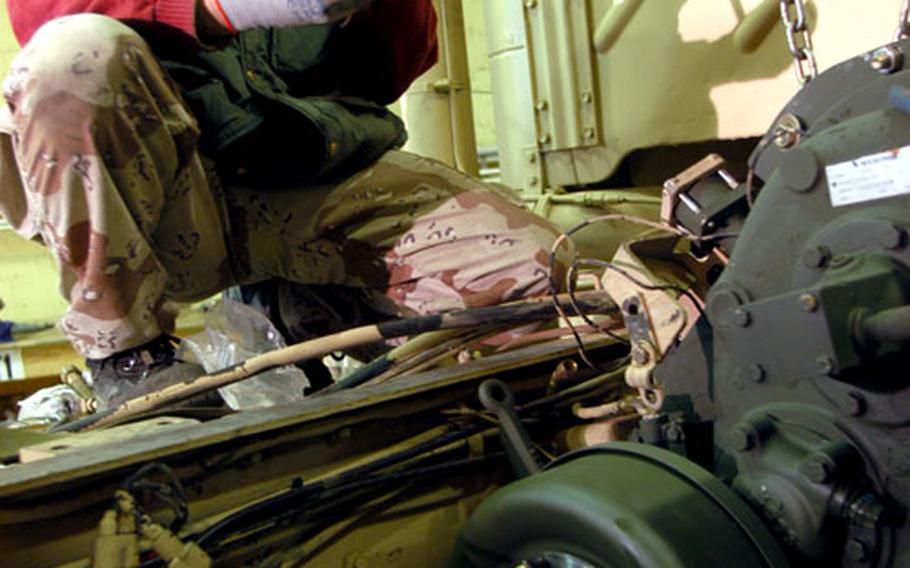 Mechanic Maurizio Bargotti works on a transfer case of a Pallet Lifting System. Bargotti is in a makeshift tent erected at the Field Support Battalion-Livorno, Italy, to handle an increase in vehicles coming from downrange. (Russ Rizzo / S&S)

LIVORNO, Italy &#8212; Tucked on the outer edges of this beach resort town on the Tuscan coast lies a little-known Army base that quietly has begun a renaissance in recent years.

Once a place where battle-worn Humvees went to collect rust, the Field Support Battalion-Livorno has emerged as a key player in the Army&#8217;s war operations by repairing thousands of vehicles for use in Iraq and Afghanistan.

And there are signs that the work will not let up any time soon. Last month, the battalion held a groundbreaking for $52 million in new construction over the next two years at the base located about one mile from Camp Darby.

Mechanics will move from poorly ventilated warehouses built a half-century ago to a state-of-the-art maintenance shop complete with overhead cranes. Vehicles now stored in temporary, humidity-controlled tents will move into warehouses designed to prevent rusting.

The base, once called the Leghorn Army Depot, essentially functioned as a junkyard for 3,500 vehicles shipped from Iraq after the Persian Gulf War in 1992. For years Humvees, 5-ton trucks and Bradley fighting vehicles sat outside in the elements.

&#8220;It was like a Cadillac ranch in Oklahoma,&#8221; said Curtis Dabney, director of maintenance for the battalion.

Then, in 1997, the base got its first call for work in years: the Army needed 150 vehicles for training exercises.

&#8220;After that we never stopped,&#8221; said Alberto Chidini, chief of operations for the battalion.

Instead of simply storing old war equipment, the battalion was charged with repairing tanks and other vehicles and keeping them ready for deployment.

It is a task the battalion takes seriously, Dabney said.

&#8220;The difference between life and death is whether a vehicle starts or not,&#8221; Dabney said.

Dabney learned a &#8220;hard-knocks&#8221; lesson of just how critical his work was when, in 1999, a Bradley fighting vehicle repaired by his mechanics failed to start in Bosnia-Herzegovina. Mechanics discovered algae an inch thick in the fuel cells, Dabney said.

Nobody&#8217;s life was in danger during that particular peacekeeping mission, Dabney said, but the results could have been much worse for soldiers in Iraq or Afghanistan.

Peacekeeping efforts in Bosnia and other missions in the late 1990s kept the battalion busy repairing vehicles. Then the terrorist attacks of Sept. 11, 2001, happened, and orders for vehicles needed for the invasion of Afghanistan flooded in, Chidini said.

The war in Iraq came after that, putting demands on the base that it has not seen before. Dabney hired 16 temporary workers to fill an order needed by June. He is considering scheduling his mechanics 24 hours a day, seven days a week to fill the order, he said.

The Army&#8217;s four other base support battalions in Europe also have contracted temporary workers to fill demands from the war in Iraq, according to Chuck Fick, a spokesman for the Army Materiel Command, which manages the battalions. A base in Germersheim, Germany, also has changed its mission to start repairing vehicles from downrange, Fick said.

Of the five European support bases, Fick said, Livorno is the only one with 50-year-old equipment. That will change in April 2007, when the new facilities are scheduled to open.