War HQ in Kuwait to move from Camp Doha to Arifjan 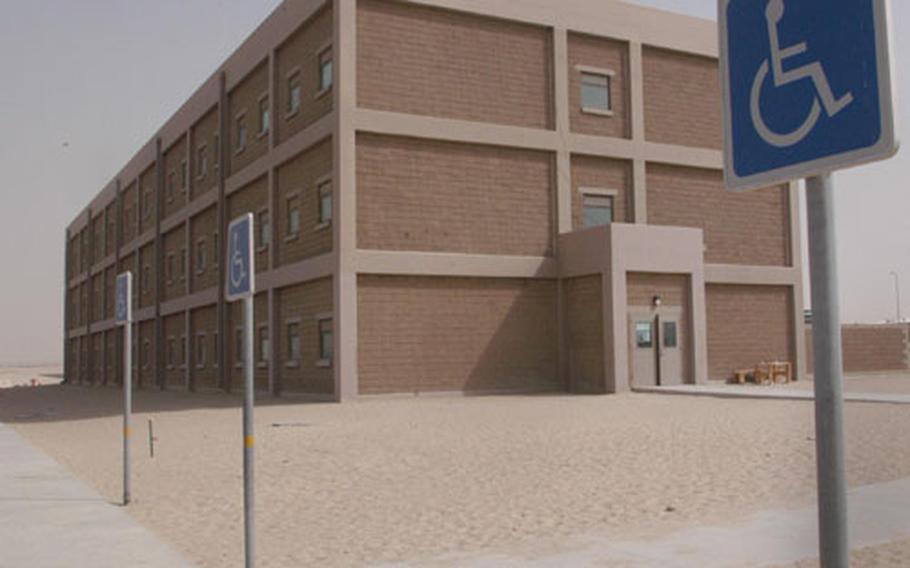 This new building at Camp Arifjan, 30 miles south of Kuwait City, was built to U.S. standards, including offering handicap parking. Arifjan was planned to house U.S. forces, but it wasn&#39;t supposed to be ready until 2005. The war in Iraq hastened the plan. (Juliana Gittler / S&S)

KUWAIT CITY, Kuwait &#8212; Over the coming weeks, the former war-fighting headquarters and the land component for Central Command will move to a new base in Kuwait.

The move, from Camp Doha to Camp Arifjan, located to the south of Camp Doha, has been planned for some time, but doing it will be a delicate process, said Brig. Gen. Abraham J. Turner, operations officer for Coalition Forces Land Component Command.

The command is responsible for the Army&#8217;s Title 10 mission in the region &#8212; helping to organize, train and equip forces in an area that includes 25 countries in Asia, the Middle East and Africa.

The move will be done in a way that avoids any disruptions, Turner said, and will be made only once the new location can support the headquarters&#8217; needs. A specific timeline hasn&#8217;t been announced, but the move should take place about mid-September.

The biggest challenge will be ensuring that the communication systems work, Turner said.

Camp Arifjan is a work in progress, delayed by the war in Iraq. The U.S. military and the Kuwaiti government had planned the base to serve as the new headquarters, but it wasn&#8217;t supposed to be ready until 2005.

&#8220;We actually moved in two years early,&#8221; said Lt. Col. Randy Odom, Base Support Battalion commander and mayor of Arifjan. &#8220;The Kuwaitis gave us this installation for the war. When we arrived, there was basically nothing here but the buildings.&#8221;

Most of the buildings are in place, along with dining and recreation facilities. But six more barracks and more office buildings are needed before it&#8217;s complete.

The new camp is modern, closer to the ports and away from the traffic and congestion of Kuwait City.

U.S. forces have had a headquarters at Camp Doha since after the 1991 Persian Gulf War, Odom said.

Under a defense agreement between the two nations, Kuwait provides bases to U.S. forces, who live and train here and stand ready to defend the host nation.

Permanent-party personnel such as those assigned to the headquarters will now live at Arifjan. Troops on a several-month rotation will continue to live at Camp Udairi, a training camp near the Iraq border.

During the war, Arifjan took in thousands more troops than it was designed to hold. Troops lived in massive tent cities. Others still live in warehouses in the industrial part of the base, called Zone 2. Permanent housing and living areas are in Zone 1.

&#8220;When the contingency operation goes away early next year, Zone 2 will cease to be housing,&#8221; Lt. Col. Bob Minasian, director of installation support for camps with the Base Support Battalion.

But Arifjan showed that it could support tens of thousands of troops if necessary, another plus for U.S. forces, Minasian said.

The 500 or so new soldiers arriving to Arifjan with the headquarters will be sprinkled into existing housing, Turner said. No one from the barracks will be evicted to make space.

But rooms designed for one person that now have three, might squeeze in a fourth person. Office space might also be crowded until new offices are built.

Once the temporary personnel and extra equipment on the base move on, the installation will have more space for people and storage.

Arifjan now has a community center, pool, food court, gift shops and even an unbelievable patch of grass under constant sprinklers. More accouterments are planned, including a sports complex, tennis courts, basketball courts and a football and soccer field.

But the plans won&#8217;t move forward until the operations in Iraq are over and the mass of temporary personnel leaves, allowing construction to resume.

So it could be a while, Minasian said.