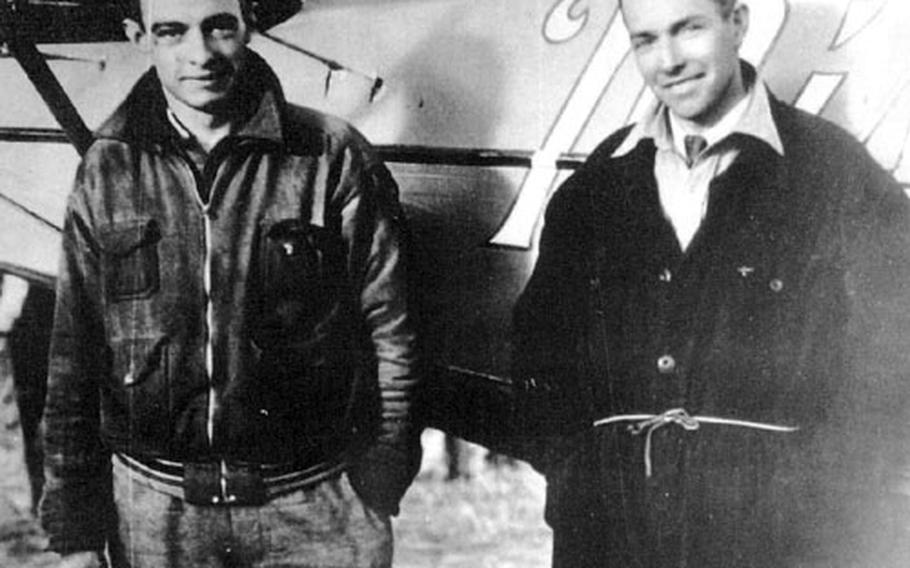 Hugh Herndon, left, and Clyde Pangborn, after crash-landing at Wenatchee, Wash., following their 1931 flight across the Pacific from Misawa, Japan. (Courtesy Spirit of Wenatchee Committee)

Hugh Herndon, left, and Clyde Pangborn, after crash-landing at Wenatchee, Wash., following their 1931 flight across the Pacific from Misawa, Japan. (Courtesy Spirit of Wenatchee Committee) The Miss Veedol aircraft sits on a makeshift runway on the beach at Misawa on Oct. 4, 1931, the day it took off for the first trans-Pacific nonstop flight. (Courtesy Spirit of Wenatchee Committee) 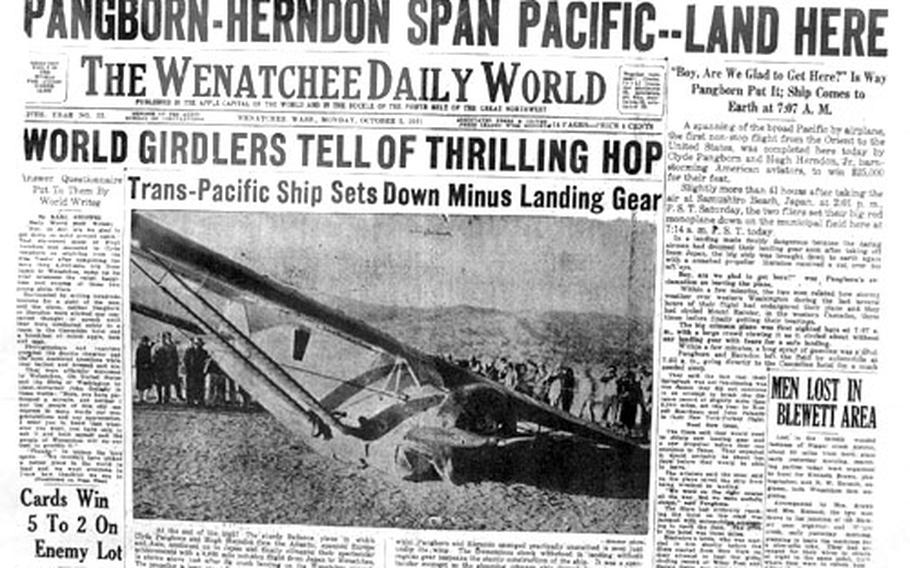 The re-enactment of the first nonstop trans-Pacific flight between Misawa and Washington state 72 years ago was postponed until next year.

The looming war in Iraq and difficulties finding a Japanese sponsor were the reasons cited for the delay, according to a letter from organizer Len Pugsley of the Spirit of Wenatchee committee to Misawa Mayor Shigeyoshi Suzuki.

&#8220;We feel it would not show proper respect for our fellow Americans and soldiers to embark on our world flight if our country is at war,&#8221; Pugsley&#8217;s letter said.

The trip was postponed until August 2004.

The flight was undertaken to earn a $25,000 prize offered by a Japanese newspaper, the Asahi Shimbun, for the first nonstop Japan-U.S. flight.

It took the aviators 41 hours and 15 minutes to cross the Pacific, before crash-landing Miss Veedol in a field in Wenatchee. Pangborn and Herndon were uninjured.

The Spirit of Wenatchee Committee has been building a full-sized replica of Miss Veedol for the past four years in a hangar in East Wenatchee.

A retired Air Force pilot who flew F-100 and F-4 fighter aircraft during a 27-year career before retiring in 1981, Clarke will be chief pilot for the Pacific crossing between Misawa and Washington state.

After initial flight testing, Pugsley said the committee now plans to tour Miss Veedol in the States during July and August to bring attention to the 2004 flight and to advance the sister-city relationship between Wenatchee and Misawa.

But technical glitches are slowing completion of the aircraft.

&#8220;Some technical difficulties involving the fabrication of fuel dump valves for jettisoning fuel is delaying completion another month,&#8221; he said.

Pugsley said Misawa city officials will be invited to witness the first flight.

It was 1931 when Pangborn and Herndon attempted to break the around-the-world flight record of 8 days, 15 hours, and 15 minutes, set by Wiley Post and navigator Harold Gatty.

On July 28, 1931, Pangborn and Herndon took off in Miss Veedol, named after the oil company sponsoring the flight, according to the committee.

They lifted off from Roosevelt Field in New York and headed for their first destination in Wales, then onward to London, Berlin and Moscow.

Upon departure from Moscow they were 10 hours behind Gatty and Post&#8217;s time and fell further behind when Herndon got lost over Siberia.

After the additional delay of landing in Mongolia they flew back on course and landed in Khabarovsk, Siberia. There a massive rainstorm turned the dirt runaway into deep mud. Pangborn and Herndon were forced to wait a day before taking off again.

While they realized they lost the chance of beating the speed record, they decided to attempt their soon-to-be-historic first nonstop flight across the Pacific Ocean, according to the committee.

They wired their New York office and asked them to arrange the proper flight clearances for Japan.

Assuming they had proper clearance, Pangborn and Herndon flew toward Japan, and during the flight Herndon photographed the country from the air.

After landing in Tokyo, they learned they didn&#8217;t have proper clearance, and because Herndon had taken photos of Japanese military sites, the aviators were arrested. After many diplomatic transactions, Pangborn and Herndon were fined and released.

They also convinced the Japanese government to allow them to attempt the trans-Pacific flight.

The Japanese government gave the pilots one shot at a takeoff; if they failed, their airplane would be impounded. The duo accomplished this task by using a long runway &#8212; and dropping the landing gear after takeoff.

Surviving the long flight over the Pacific, Pangborn and Herndon searched for a place to land after crossing the Washington coastline. Spokane and Pasco, Wash., their first two choices, were fogged in.

Pangborn&#8217;s next to choice was Wenatchee, Wash., in the eastern portion of the state. Miss Veedol made a belly landing on Fancher Heights in Wenatchee on Oct. 5. Pangborn and Herndon didn&#8217;t receive any fame for a feat that wouldn&#8217;t be done again until after World War II.