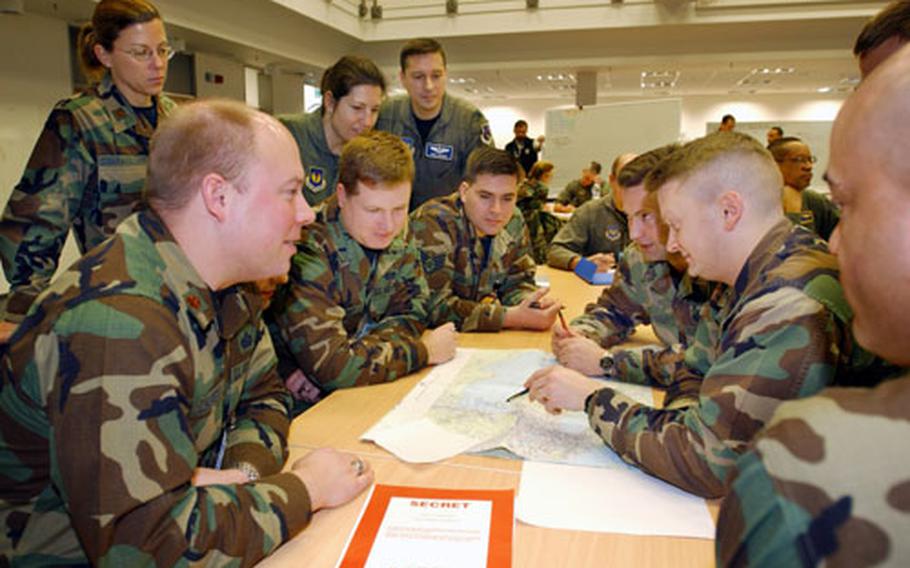 U.S. airmen plan for combat air operations Wednesday during the first phase of Austere Challenge 2004. The three-phase exercise is designed to certify U.S. Air Forces in Europe&#39;s ability to perform its mission as a warfighting headquarters. (Courtesy of USAF)

RAMSTEIN AIR BASE, Germany &#8212; U.S. Air Forces in Europe airmen know how to fight a war.

They played a key role in planning and executing the 1999 air campaign in Kosovo, which led to the ouster of former Yugoslav President Slobodan Milosevic.

Last week, USAFE planners, operators and staff members spent seven days figuring out how they will execute their next war.

DePalmer led the first phase of the exercise, which wrapped up Friday at Ramstein Air Base.

In February, the exercise continues with orders to USAFE warplane squadrons to gear up for battle. In March, the warplanes will launch their attack, in concert with ground and maritime units, via the high-tech arena of the Warrior Preparation Center at Einsiedlerhof.

DePalmer won&#8217;t say much about the fictitious battle because, he said, details are classified. But he compared it to what happened in Iraq, when the military formed a joint task force, made up of all branches of the service, to move into Iraq to depose Saddam Hussein.

The goal of Austere Challenge is to prepare USAFE to support a contingency operation in the U.S. European Command theater of operation, he said.

Once it finishes the exercise, USAFE hopes the command inspector general will certify it as the first Air Force command to pass the &#8220;warfighting headquarters&#8221; concept, said USAFE spokesman Master Sgt. Joe Bela.

The exercise at Ramstein is being monitored by, among others, retired Air Force Lt. Gen. Mike Short, who commanded the NATO air component during the Kosovo campaign.