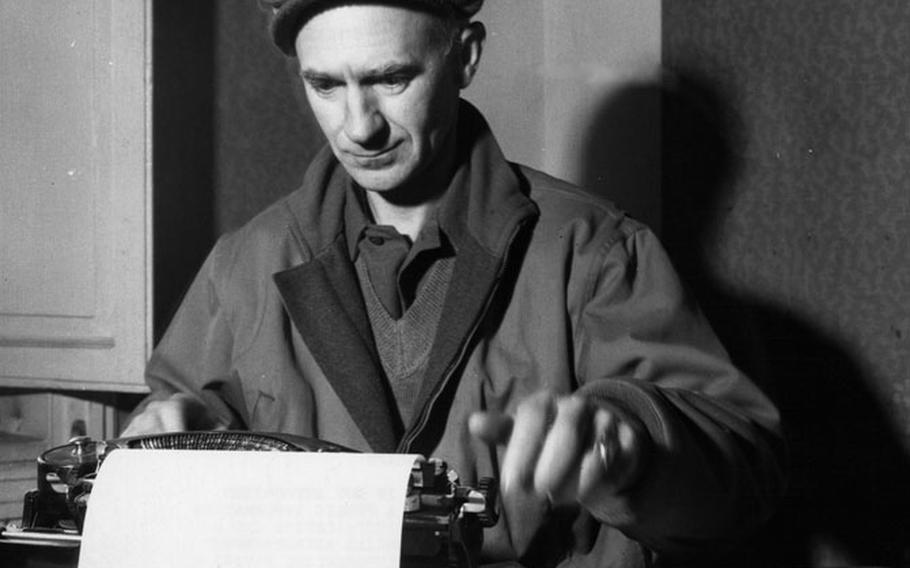 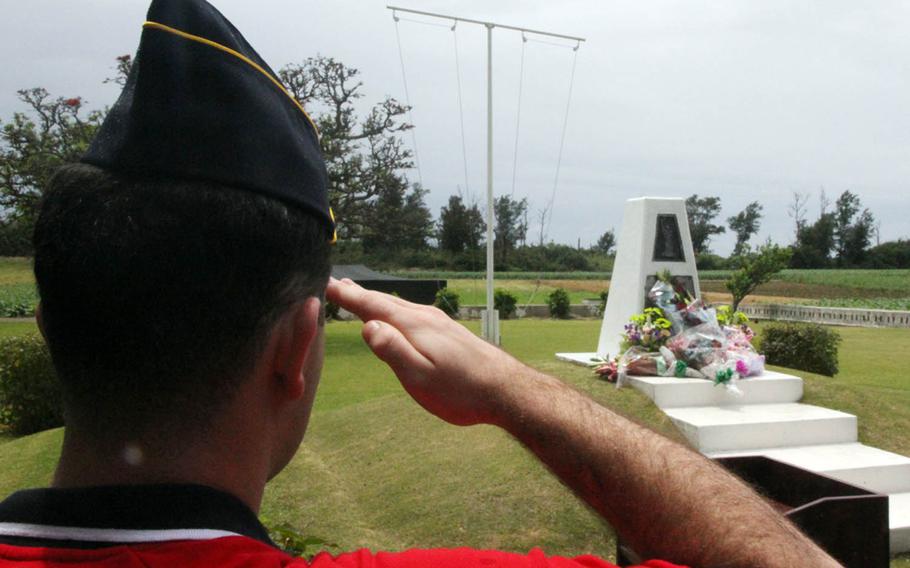 IE SHIMA, Okinawa — Navy Capt. Robert Mathewson Jr. didn’t know much about famed World War II correspondent Ernie Pyle before being asked to speak during a memorial service Sunday at the spot where Pyle was felled by a Japanese bullet.

As memories of the war fade, so too have recollections of Pyle’s importance and impact. He was awarded a Pulitzer Prize for chronicling the average American soldier in foxholes across Europe. His “letters home” reached more than 14 million households and were read avidly by President Harry Truman, Eleanor Roosevelt and members of a grateful nation, who often prayed for him as they did their own sons.

Pyle was mourned nationwide at his death and was awarded a posthumous Purple Heart, a rare honor for a civilian.

Since 1952, when Okinawa’s American Legion Post 28 began hosting memorial services for Pyle, the number of attendees has dwindled to a couple of dozen, mostly Boy Scouts and Marines. There is no longer a color guard, nor a firing party made up of uniformed soldiers wearing shiny ceremonial helmets.

The number of flowers that once flooded the monument built on Ie Island in Pyle’s honor has dwindled, and the number of attendees familiar with his work has also dropped sharply.

Yet Mathewson — a decorated combat veteran who commands Okinawa Naval Base — said Pyle’s dedication to the average soldier must live on.

“He didn’t just write about American soldiers to the public; he brought them to life,” he said. “It is this commitment that inspires me to be better as I lead and care for our current generation of fighters.”

Mathewson read from one of Pyle’s most famous works, “The Death of Captain Waskow,” and recounted how Pyle had advocated for “fight pay” in one of his columns, something Congress then granted.

“As a commander and an officer, I have no higher priority than my sailors,” Mathewson said. “Preparing for this speech and learning about the infantry’s friend Ernie Pyle has made me take pause and look more closely at the individual faces in my command. Our Navy’s strength is in the individual sailor — whether it’s a master at arms coming off a 12-hour shift or our young surface warfare officer in her sixth month at sea. They deserve leadership who sees them as Pyle did, as brave Americans with a story to tell. I am renewed in my commitment to serve my sailors, to fight for them and to hear them.”

‘Soldier’s best friend’ Pyle was born Aug. 3, 1900, near Dana, Ind. After graduating high school, he joined the Navy Reserve, just in time to see the final months of World War I.

Pyle studied journalism at Indiana University, and later won acclaim writing daily feature columns as a war correspondent for Scripps-Howard newspapers. As his profile grew, his work was featured in a growing number of newspapers, including Stars and Stripes.

Pyle traveled to London in 1940 to report on the German bombings known as the “Blitz.” It wasn’t long before he joined the American troops stationed there. He covered the war in North Africa, Italy and finally Normandy, France.

He was awarded a Pulitzer Prize in 1944 for his coverage of the war in Europe.

After a short break, Pyle volunteered to cover the Pacific campaign. He linked up with the 77th Infantry Division as it bore down on Okinawa, Japan. He was riding in a jeep to a forward command post during the battle for Ie Shima with Army Lt. Col. Joseph Coolidge when the jeep was fired upon by a Japanese machine-gun from a ridge above.

“We all jumped out of the jeep and dived into a roadside ditch,” Coolidge told The Associated Press. “A little later Pyle and I raised up to look around. Another burst hit the road over our heads and I fell back into the ditch. I looked at Ernie and saw he had been hit. He was killed almost instantly, the bullet entering his left temple just under his helmet.”

Pyle was buried near where he fell. His body was later moved to Okinawa’s main island and then to his final resting place beside the soldiers he covered at Hawaii’s National Memorial Cemetery of the Pacific, known as “the Punchbowl.”

The monument erected where he was killed reads, “At this spot the 77th Infantry Division lost a buddy. Ernie Pyle, 18 April 1945.” Legion Post 28 leases the site and maintains the memorial with the help of Marines stationed on the island.

“Ernie Pyle was known throughout the world as the ‘GI journalist’ and ‘soldier’s best friend,’” said Post 28 commander Charles Cathey. “Now that you know just a little bit about this great man, you can understand why we are here today paying our respects to our comrade in arms.”

‘Understanding our stories’ Marine 1st Lt. Christine Baldridge said she hadn’t known about Pyle before she became Ie Shima training facility officer in charge earlier this year, but after learning about his contributions to the troops during World War II and his importance, she brought the Marines under her command out to the memorial to learn about him.

“We can’t fight the fight without having a support base at home, without people actually truly understanding our stories out here abroad,” said the 26-year-old from San Jose, Calif.

“So having a ceremony like this to give our appreciation for his sacrifice and what he did so that way he could bring the story of the troops on the ground back home to help build that support, to get the truth; it’s something that we need out here as far as morale goes as well to help us push forward.

“He could have sat in a cushy office back at home kind of getting the story from afar but he chose to be out here with the troops,” she said.