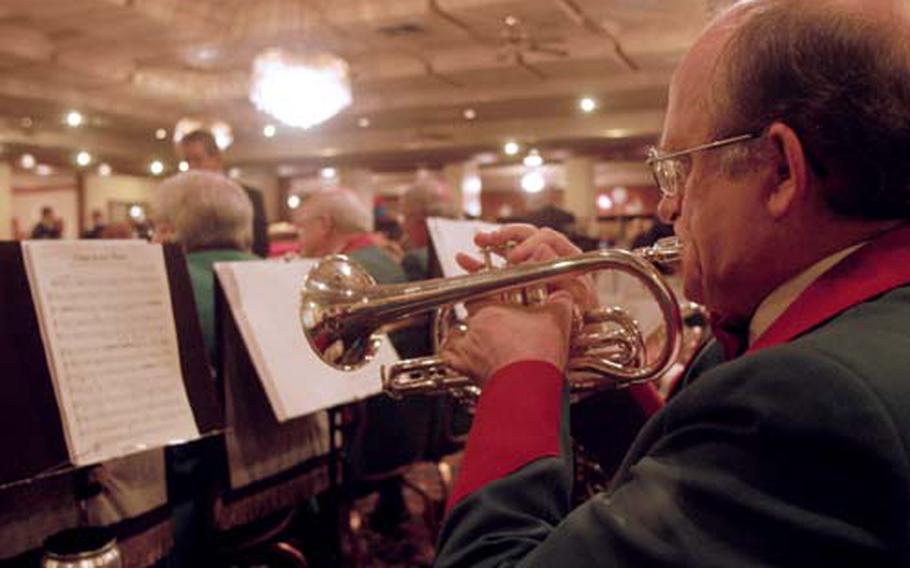 Buy Photo
The Breckland Brass Band, based in nearby Brandon, played 1940’s-era music during the 60th anniversary party of the 48th Fighter Wing Friday night at RAF Lakenheath. (Stars and Stripes)

RAF LAKENHEATH &#8212; Peering hard at black-and-white photographs of the base in the 1940s, Les Friend was struck by a childhood memory.

"I came here as a boy in 1950 for a Christmas party. It was in a hangar," said the 69-year-old native of nearby Thetford. Friend was one of 350 Britons and Americans who came out to celebrate the 60th anniversary of the 48th Fighter Wing on Friday night at the officers club.

Friend recalled memories of airmen passing out candy to local children and spoke of the longstanding bond between the local residents and the American forces.

"We&#8217;ve just always had something to do with our American friends," he said. It was a refrain heard throughout the night as guests chatted about the wing&#8217;s storied history and role in wars and conflicts over the past six decades.

The wing &#8212; now home to a fleet of about 60 F-15s &#8212; had its roots in the 48th Bombardment Group and was originally based in Chaumont, France, with F-84 Thunderjet and F-86 Sabre jet aircraft patrolling near the then-Communist-controlled Eastern Bloc nations. When relations between the U.S. and France deteriorated in the late 1950s, the 48th Tactical Fighter Wing, as it was known then, along with its newly gained F-100 Super Sabres, moved to Lakenheath, according to an online history of the wing.

Guest speakers commemorated decorated aviators who flew missions for the 48th Fighter Wing and a brass band was brought in to entertain the crowd with 1940s-era music. The party was like a living museum, with troops dressed in period uniforms, historical-photograph exhibits, displays of old aviation gear and slide shows detailing the archaeological roots of Lakenheath.

"To me, getting to meet so many people who have had these connections with the base over time is the best," said the wing&#8217;s commander, Col. Jay Silveria, after chatting with a former Royal Air Force pilot who flew from Lakenheath in 1943 when it was still a British base. "I don&#8217;t think we realize the impact we have on the community until events like this."

Read a full online history of the 48th Fighter Wing at: www.lakenheath.af.mil/shared/media/document/AFD-080528-007.pdf.