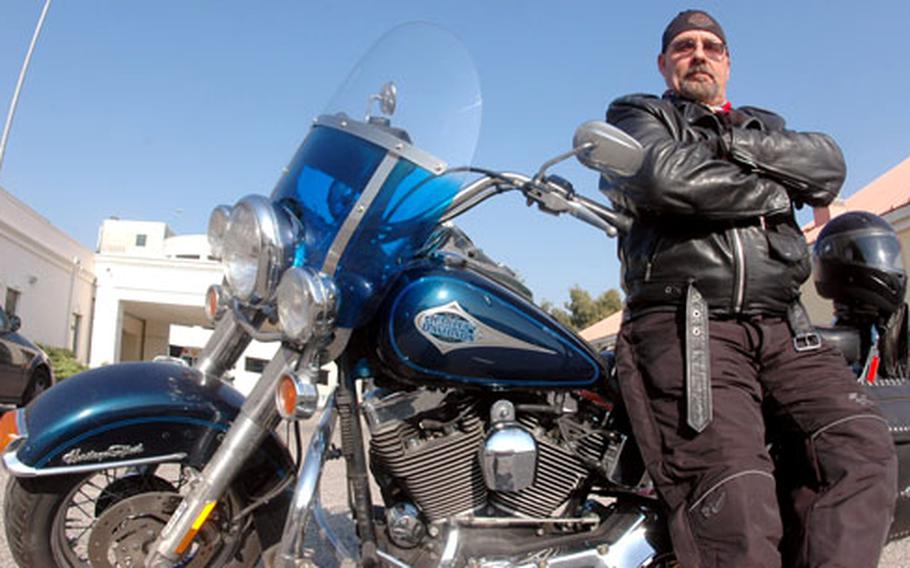 Steve Layne, regional operations center manager for Navy Region Europe, poses with his 2001 Heritage Softail Harley Davidson before setting out to ride the challenging streets of Naples, Italy. Safety officials want to include a mentorship program in Naples, where new drivers would ride the roads with experienced drivers before being allowed to hit the roads on their own. (Sandra Jontz / S&S)

NAPLES, Italy &#8212; A mentorship program for new motorcyclists still is in the works in Naples, with the Navy base&#8217;s safety office experts now seeking input from experienced drivers.

The safety office at Naval Support Activity Naples has devised a basic format for a motorcycle mentorship program, which would require motorcyclists new to driving in Italy to undergo a series of accompanied rides before setting off on their own, said Jim Dickinson, traffic safety specialist and lead motorcycle instructor.

Before the program&#8217;s launch &#8212; which isn&#8217;t likely before the spring &#8212; safety experts want advice from experienced motorcycle drivers to further develop the program, which Dickinson said he is politicking base leadership to make mandatory.

&#8220;Motorcycle riding here in Italy is one of the most dangerous activities we encounter, both as auto drivers and for those who ride motorcycles,&#8221; said Capt. Floyd Hehe, commander of NSA Naples. &#8220;Any program we can field to increase awareness will be beneficial.&#8221;

Currently, unlicensed motorcyclists go through the base&#8217;s three-day safety course to get licensed and to register a motorcycle or scooter with the Motor Vehicle Registration Office. The basic course includes classroom and range training, but no unsupervised, open-road riding.

Dickinson seeks input for considerations such as: should novices ride for a predetermined amount of time or should the mentorship program be based on miles driven; and what criteria should a rider have in order to be a mentor.

While motorcycle accident rates have been low to nonexistent over the past several years in the Naples area, low numbers weren&#8217;t enough to convince leaders to leave it at that, said Steve Layne, regional operations center manager for Navy Region Europe, who takes credit for the idea of the mentorship program.

They wanted something more to orient new drivers &#8212; especially those new to Naples traffic &#8212; to the unfamiliar conditions.

&#8220;The mentorship will be a little bit more, a little more awareness of road conditions, driving habits, things needed to really be safe here,&#8221; Layne said.

Italians are known as notoriously aggressive drivers. Driving through cities, especially, isn&#8217;t for the meek.

On highways, safety experts noted that cars and trucks tend to sway more easily into the lane with a single motorcyclist, versus one occupied by two cycles riding side by side or one slightly behind the other.

And new drivers tend to drive overly cautiously, Dickinson said. At times, that can pose a greater risk, especially on some of Italy&#8217;s roadways where drivers tend to be impatient.

Hehe said that once the program is developed, he likely will make it mandatory for any sailor within his command who wants to ride a motorcycle. He can&#8217;t make the course mandatory, however, for servicemembers assigned to other tenant commands at the base.

The motorcycle safety courses offered by the base are free and will remain so, even after the mentorship portion is added, Dickinson said. So far, the safety office has about 15 sports-bike drivers and about 10 cruise-bike motorcyclists who could become mentors.