Student pilot Staff Sgt. Galen Apo, 27, does pre-flight checks on a Cessna at Yokota Air Base. Apo said he joined the Air Force to fly aircraft but ended up fixing them instead as a member of the 374th Maintenance Squadron at Yokota. (Seth Robson/Stars and Stripes) 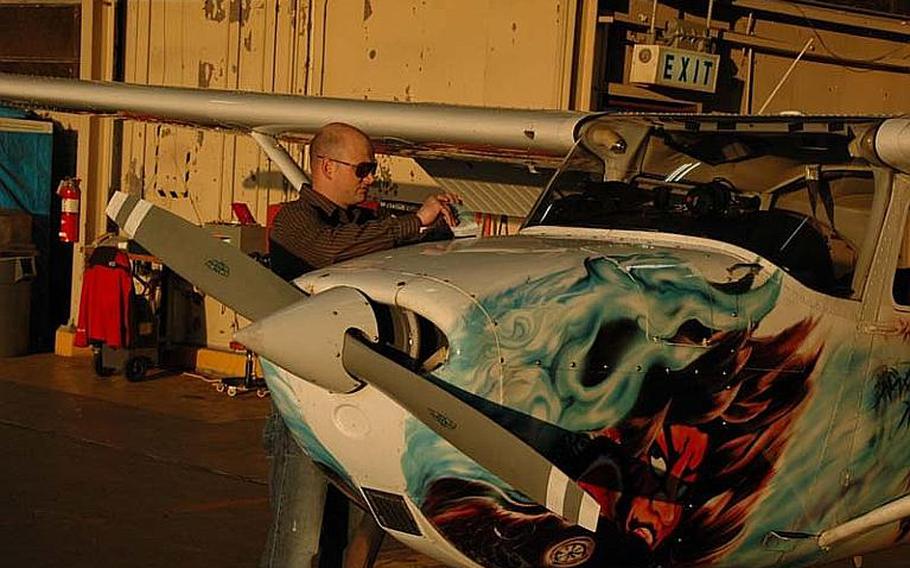 A Cessna from the Yokota Flight Training Center prepares for takeoff at Yokota Air Base, Japan. The base is home to one of three aero clubs in the Pacific. (Seth Robson/Stars and Stripes) Student pilot Staff Sgt. Galen Apo, 27, flies a Cessna over Tokyo. Apo said he joined the Air Force to fly aircraft but ended up fixing them instead as a member of the 374th Maintenance Squadron. (Seth Robson/Stars and Stripes) 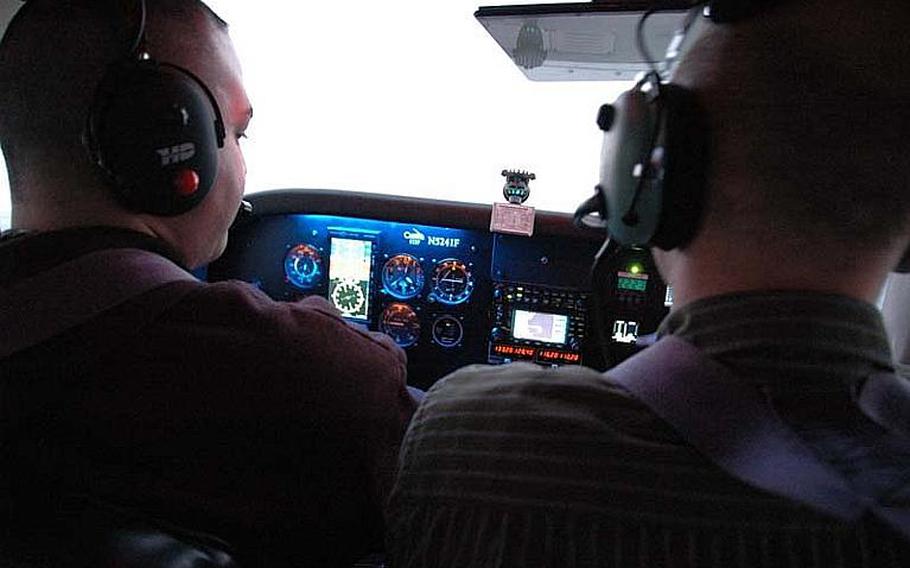 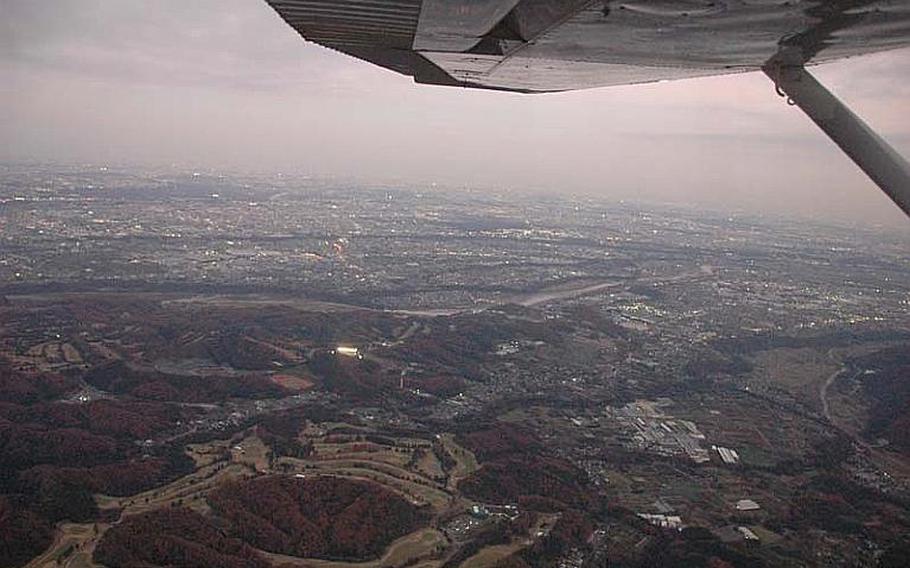 The view from a Cessna during a training flight over Tokyo. More than 100 wannabe pilots are taking flying lessons at the Yokota Flight Training Center at Yokota Air Base, Japan. (Seth Robson/Stars and Stripes)

YOKOTA AIR BASE, Japan &mdash; With military staffing cuts on the horizon, some U.S. airmen in the Pacific are climbing into the cockpit or picking up a wrench in hopes of landing a job in the booming commercial aviation market.

The International Civil Aviation Organization expects hundreds of thousands of new pilots will be required as demand for air travel booms over the next two decades. The Boeing Co. estimates the world&rsquo;s airlines will need an additional 466,650 trained pilots and 596,500 maintenance personnel by 2030, with much of the growth coming in the Asia-Pacific region, according to the company&rsquo;s website.

&ldquo;Never in human history have we seen a time when 2 billion people will enter the middle class and demand air travel. That time is now,&rdquo; William Voss, president of the Washington, D.C.-based Flight Safety Foundation, was quoted in a recent Associated Press story.

The jobs are arriving at the right time for personnel leaving the Air Force, which will cut 9,900 airmen next year in line with defense budget cuts.

At Yokota Air Base, some personnel concerned about the possibility of losing their active-duty jobs are spending their off-duty time in class in an effort to gain certificates that could help them land lucrative civilian jobs. Others are investing in flight training at the on-base aero club &mdash; a path that could lead to careers as commercial pilots.

More than 100 students are taking flying lessons at the Yokota Flight Training Center, the only U.S. aero club on mainland Japan. Dozens more have joined aero clubs at Kadena Air Base on Okinawa and at Osan Air Base in South Korea.

Most are Air Force officers or airmen who have picked up the flying bug at work, according to the Yokota aero club&rsquo;s manager, Victor Arzuaga, 51, of Puerto Rico, who spent 15 years refueling planes for the Air Force before training as a private flight instructor.

&ldquo;It only takes one time for people to jump in an airplane and start flying and they are addicted,&rdquo; said Arzuaga, who shares other aviation professionals&rsquo; optimism about job growth in the industry.

Demand for professional aviators in the U.S. will spike over the next decade due to the retirement of many older pilots, he said.

&ldquo;The amount of pilots retiring in the next 10 or so years means there is going to be a lot of openings,&rdquo; he said, adding that while a pilot&rsquo;s salary might start out low, top pilots can earn big money.

While not as bullish as the worldwide predictions, the U.S. Bureau of Labor Statistics predicts the number of airline and commercial pilots in the U.S. will grow 11 percent by the end of the decade, with regional airlines and low-cost carriers presenting the best job opportunities. The median annual wage for a commercial pilot was $67,500 in 2010, according to bureau data.

Getting a commercial pilot&rsquo;s license, however, is not easy and it&rsquo;s not cheap.

Most commercial pilots start out by earning a private license and then completing instrument and commercial training at a combined cost of $31,000. To get a private license, students must complete 54 hours of ground school, which requires reading thousands of pages of regulations and rules. They must also complete 40 hours of flying, including five hours of cross-country flying and five hours of solo flight, Arzuaga said.

Students can gain private and instrument flying certificates and do commercial ground school at Yokota&rsquo;s aero club, but they must go elsewhere to do practical training on commercial aircraft, he said.

Until last year, airmen were able to use their tuition assistance to pay for about half of the $10,000 cost of private pilot training, but that funding was cut when the Defense Department decided that students could use TA only at accredited institutions. Now, the aero club is trying to link up with an accredited institution so that the funding can be restored, Arzuaga said.

During a recent training flight over the skies of Tokyo, the engine of the Cessna being piloted by Apo went from a steady hum to a stuttering chug. Moments earlier, the instructor had set the throttle to idle to simulate engine failure, and now it was Apo&rsquo;s job to figure out what to do next.

The aircraft began to lose altitude as Apo went through forced landing procedures. Once the procedures had been followed, the instructor pushed the throttle forward and the plane gained altitude.

Apo&rsquo;s instructor on this flight was Tech. Sgt. Mike Pogvara, 30, who works with the 730th Air Mobility Squadron organizing cargo and passenger movement at Yokota, but moonlights at the aero club.

Pogvara, who started flight training in high school, said personnel who leave the armed services might find a career as a commercial pilot rewarding.

&ldquo;Flight training gives you an opportunity to get into commercial aviation if you get out,&rdquo; he said.

Apo, 27, said he joined the Air Force to fly aircraft but ended up fixing them instead as a member of the 374th Maintenance Squadron at Yokota.

It&rsquo;s taken him four years to get a Bachelor of Science in professional aeronautics at Embry-Riddle Aeronautical University, and he&rsquo;s used tuition assistance and his own money to fund his flight training in the hopes that the Air Force would admit him to military flight school.

&ldquo;My goal is to be a career Air Force pilot and this is a big step to being accepted,&rdquo; he said. &ldquo;Commercial pilot would be the next option if the Air Force doesn&rsquo;t work out.&rdquo;

The club is also planning to offer practical instruction to airmen who want to get Federal Aviation Administration aircraft mechanic&rsquo;s certificates.

Employment of aircraft mechanics and technicians is projected to grow at 6 percent through 2020, more slowly than the need for commercial pilots, according to the Bureau of Labor Statistics. The median annual wage for an aircraft mechanic was $53,420 in 2010.

Apo said many of his peers are worried about being cut from the Air Force and are looking at opportunities for work as commercial aircraft mechanics. Some are taking classes for commercial certificates through Central Texas College, he said.

&ldquo;There are quite a few jobs open outside of the Air Force for an aircraft mechanic,&rdquo; he said. &ldquo;It is not much of a problem for us to get those jobs, but you have to get that license to get hired.&rdquo;

Many of Apo&rsquo;s peers have years of experience maintaining aircraft, but they don&rsquo;t have the FAA certificates required to get high-paying jobs in the commercial sector, he said.

Air Force mechanics typically specialize in either air frames or power plants, but the FAA requires knowledge of both fields before it will award someone an aircraft mechanic&rsquo;s certificate, he said.

Another aircraft mechanic who did flight training at the Yokota aero club, Air Force Master Sgt. Mark McClish, 36, of Statesville, N.C., said he&rsquo;d consider a career in commercial aviation after he retires.

&ldquo;I love flying, and if I could do it for a job I couldn&rsquo;t be happier,&rdquo; he said.