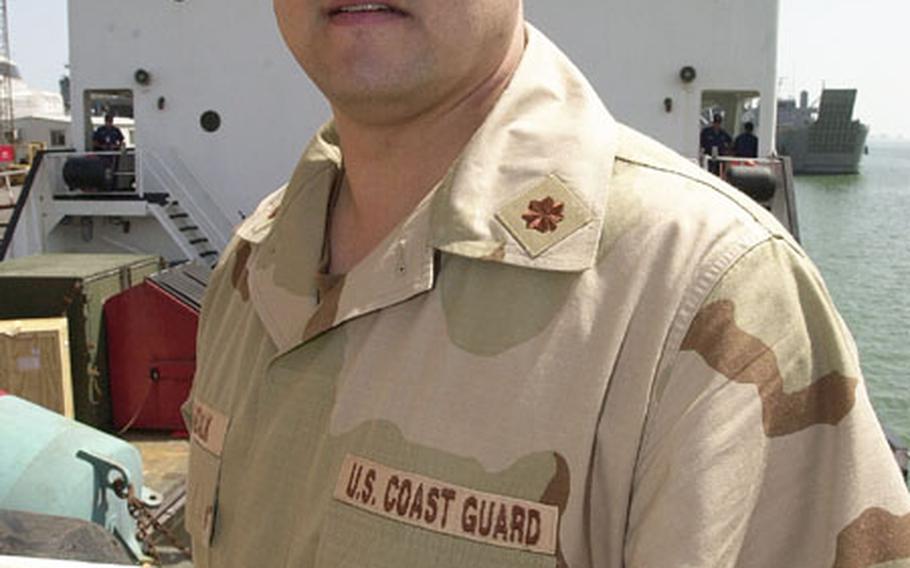 Coast Guard Lt. Cmdr. Christopher Smith, commanding officer of U.S. Coast Guard Cutter Walnut, is leading a crew of nearly 50 to be ready to respond to threat of oil as a terror weapon in the Persian Gulf by Saddam Hussein. (Mark Oliva / S&S)

MANAMA, Bahrain &#8212; The crew of the U.S. Coast Guard cutter Walnut is preparing for the worst.

The Hawaii-based Walnut and its crew recently arrived in the Persian Gulf as part of U.S. forces preparing for a war against Iraq. Many fear that Iraqi President Saddam Hussein might release millions of gallons of oil in an attempt to slow down an invasion force.

The Walnut &#8212; normally tasked as a buoy tender &#8212; is now equipped with oil-skimming equipment.

It&#8217;s the first time, Coast Guard officials say, that U.S. forces deployed to specifically counter threats against pollution as a tool of war.

During the 1991 Gulf War, Saddam used oil as a weapon against coalition forces. Slicks, hundreds of miles long, ran the length of the Gulf, killing wildlife, damaging the fishing industry and threatening desalinization plants that provide fresh water to Gulf states.

This time, the plan is to stop any spills before they become too big of a problem.

&#8220;We trying to be proactive because oil was used as a weapon last time,&#8221; said Hanzalik, who is now in Bahrain. In the States, the Coast Guard is the leading agency to battle oil spills. The National Strike Force routinely plans for the trapping and retrieving of spilled oil along the nation&#8217;s coastlines, as well as inland tanks and pipelines. Now, they&#8217;re bringing that practice to the Persian Gulf.

The Walnut &#8212; the primary tool to battle spills and which doubles as an oil-recovery platform &#8212; is manned by a crew of 50 men and women. On board the 225-foot vessel are floating oil booms to contain spills, a floating oil skimmer to siphon oil off the water&#8217;s surface and pumps to transfer the spilled oil to four inflatable oil barges, each capable of holding 26,000 gallons of oil.

The biggest challenge facing the Walnut&#8217;s crew is keeping a fresh water supply, which is vital to oil-recovery operations, Smith said.

&#8220;Our biggest hazard in an oil recovery is to the people on the deck,&#8221; Smith said. &#8220;We make sure everyone is covered in suits, gloves and masks. Before coming back inside the ship, they need to be decontaminated, just as they would for any hazardous materials they might handle.&#8221;

While the Walnut is equipped to handle oil spills, it&#8217;s a mission the crew has never had to perform.

Morgan remained confident that the Walnut&#8217;s crew is ready to respond, despite the lack of actual hands-on experience trapping and skimming oil. In December, the crew finished an annual Spilled Oil Recovery Systems Exercise, a qualification requirement for all Coast Guard cutters.

Looking to the past Gulf War as an example, Morgan said he expects his crew will have a heavy load to bear should the threats come true.

While the Walnut is the only U.S. naval asset specifically tasked to handle oil spills in the region, several United Kingdom vessels also might be tasked to respond.

The National Strike Force also could call in civilian contractors to take over.