Walmart to pay back wages, change policies after denying Navy reservist a job over military duties 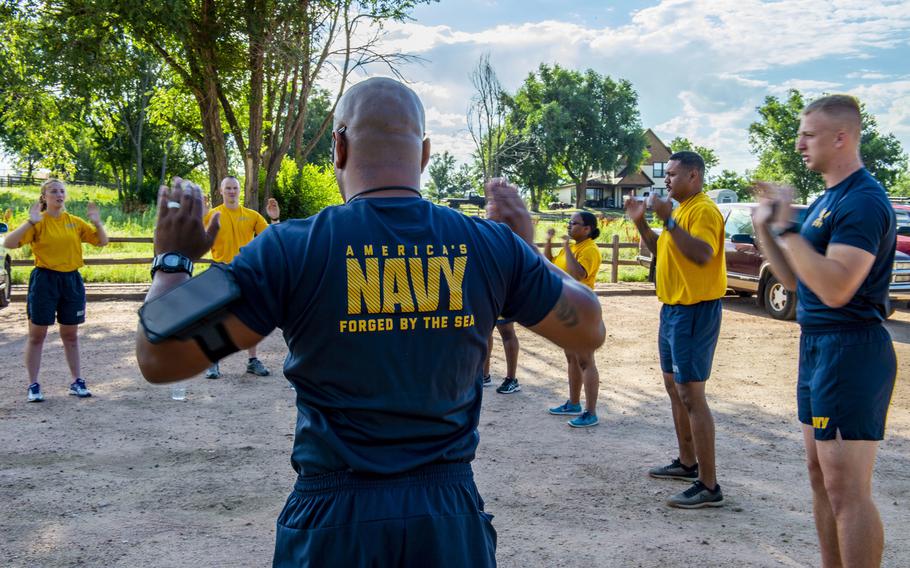 Reserve sailors at Navy Operational Support Center Fort Carson, Colo. warm up before a fun run in July 2019. Walmart must pay a Navy reservist back pay and review its hiring policies as part of a lawsuit settlement with the Department of Justice, after a store in Grand Junction, Colo., denied the reservist a seasonal, part-time job when she disclosed she would need to take two weeks off during the summer for reserves training. (Gilbert Bolibol/U.S. Navy)

Walmart will revise its hiring policies and pay an undisclosed amount of back wages to a Navy reservist who said the retail giant refused to hire her three years ago because of her military duties.

The changes and back pay are part of a deal reached this week to settle a lawsuit brought by the Department of Justice Civil Rights Division and the United States Attorney’s Office on behalf of Petty Officer 3rd Class Lindsey Hunger, who said the retail giant refused to hire her at a store in Grand Junction, Colo., after she mentioned she would need time off for Navy duty.

Hunger said that when she applied in 2016 for a job, she told personnel coordinator Kathleen Kelsey in a phone interview that she would need two weeks off to complete her mandatory annual training, the court complaint said.

Kelsey “responded that summer was a busy time at Walmart, the store needed someone who would be there, and that Walmart could not support Hunger’s absence for two weeks,” court documents stated.

Hunger was not hired and Walmart never called her back to discuss employment, the complaint said.

When the Department of Labor investigated Hunger’s claim, Kelsey told investigators that she did not recall speaking with Hunger, the complaint said.

The lawsuit brought on Hunger’s behalf says Walmart violated the 1994 Uniformed Services Employment and Reemployment Rights Act. As part of the settlement, Walmart will revise its hiring policies to prevent discrimination “based on their military service (including required military training obligations) or membership in the uniformed services,” the Justice Department said.

The retail chain also said it would provide training “on employees’ and service members’ rights and obligations” under USERRA to staff in the store where Hunger was refused a job.

“Walmart is one of the nation’s largest employers and scores of dedicated service members all across the United States will benefit from this settlement and Walmart’s agreement to update its employment and training practices,” said Assistant Attorney General Eric Dreiband, of the Justice Department’s Civil Rights Division.