Wall no barrier for Beatles, Twist 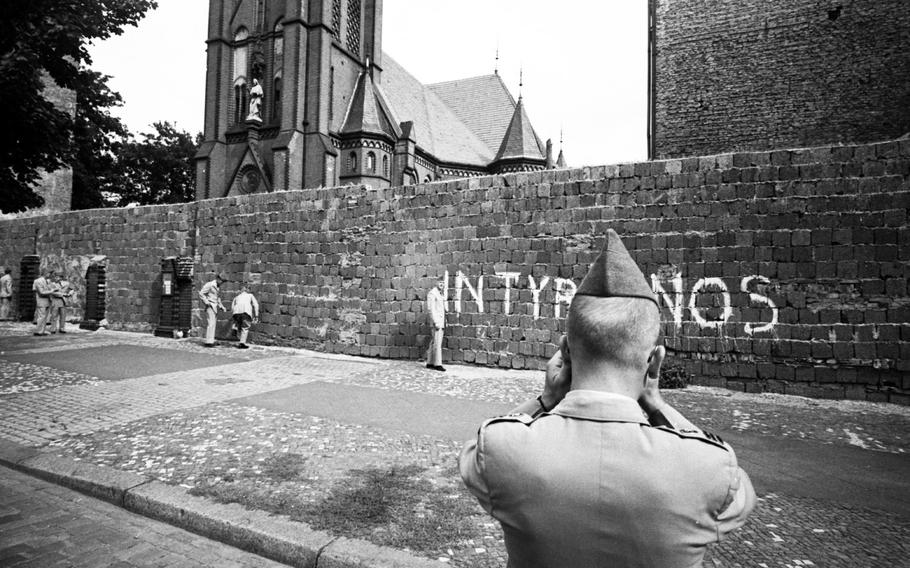 Buy Photo
A West Point cadet poses for a photo in front of the Berlin Wall at the Church of Reconciliation in 1964. (Gus Schuettler/Stars and Stripes)

Buy Photo
A West Point cadet poses for a photo in front of the Berlin Wall at the Church of Reconciliation in 1964. (Gus Schuettler/Stars and Stripes) 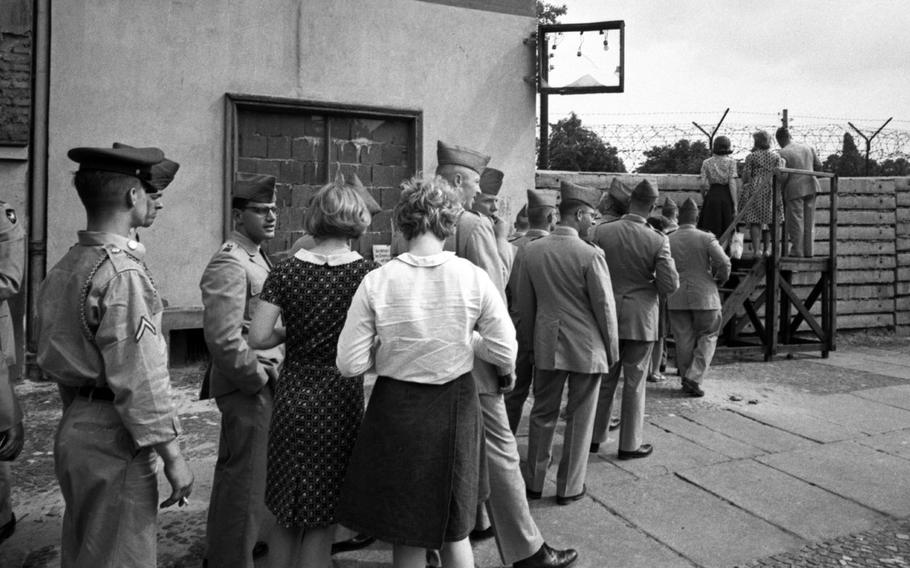 Buy Photo
West Point cadets and other visitors wait in line for a chance to look over the Berlin Wall in 1964. (Gus Schuettler/Stars and Stripes) 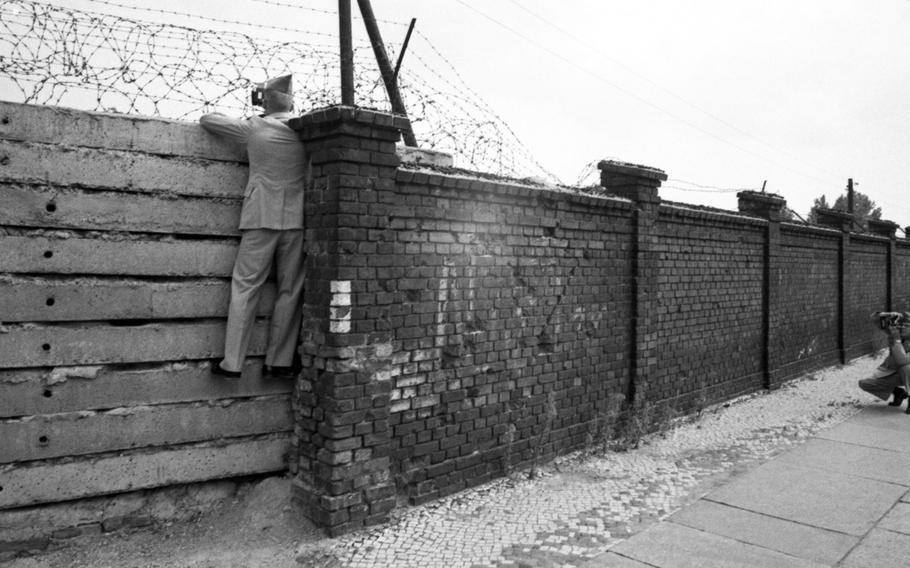 Buy Photo
A West Point cadet takes a photo of a classmate sneaking a look over the Berlin Wall in 1964. (Gus Schuettler/Stars and Stripes) Buy Photo
West Point cadets gather at the Berlin Wall beneath the ironically-named and ill-fated Church of Reconciliation in 1964. The church, due to its position in no-man's land, was abandoned and eventually razed in 1985; the Chapel of Reconciliation now stands at the spot in unified Berlin. (Gus Schuettler/Stars and Stripes) 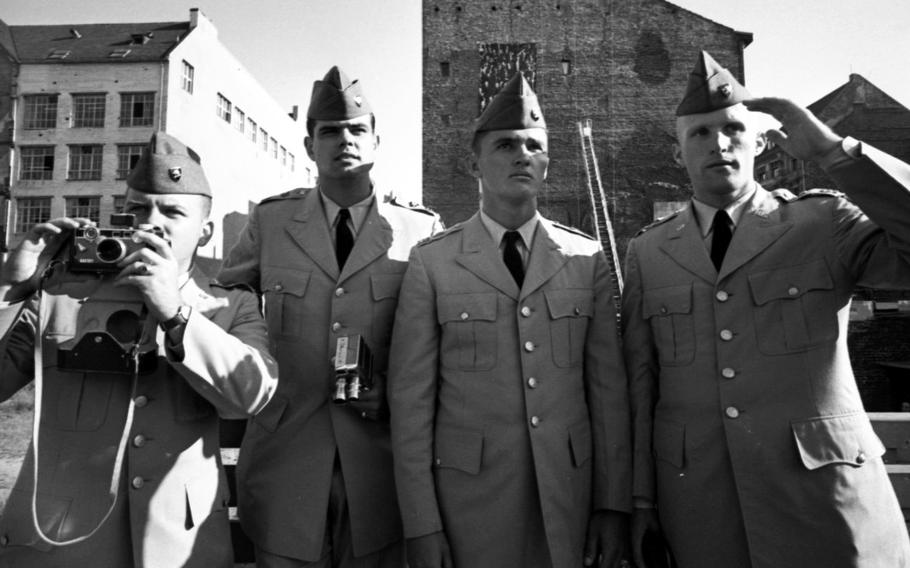 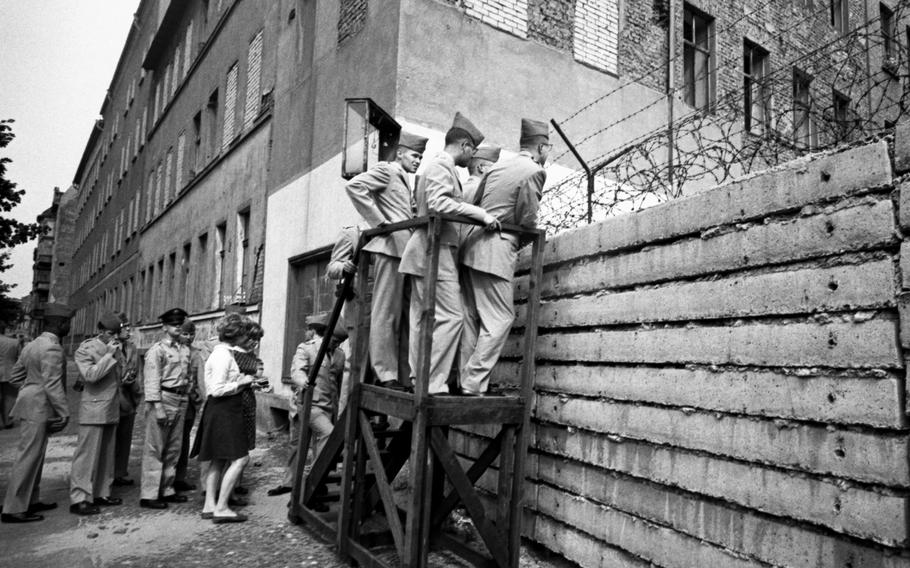 Buy Photo
West Point cadets line up with other visitors take a look across the still-basic Berlin Wall in August, 1964. (Gus Schuettler/Stars and Stripes)

A peek behind the Communist wall in East Berlin by a Russian-speaking West Point cadet has divulged that even the Iron Curtain is no defense against the blatant Beatles.

But a series of sorties beyond the Red Wall through Checkpoint Charlie in the American Sector is revealing broader aspects of Communist life for some 650 West Pointers pulling a month's duty in USAREUR tactical units as "3rd lieutenants."

Frank Prokop, a first classman from Trenton, N.J., speaks both German and Russian — his linguistic interests having been inspired to some degree by his father, who although retired from the Air Force, is of Russian descent.

"A little Russian, you see, comes in mighty handy when I'm writing home for money," the tall, tanned cadet explained.

Prokop was one of 82 upperclassmen in the fourth of six two-day "look-see" operations being conducted by the Berlin Brigade for the summer field soldiers.

When the group stopped at the "Garden of Remembrance," a grandiose Soviet war memorial, the New Jersey senior looked for a chance to chat in Russian which he has been studying for three years at the academy.

The war shrine, located in what is known as Treptow Park in Berlin's Soviet Sector, is a top attraction for tourists from both East and West.

Crypts in the huge memorial supposedly contain the ashes of several thousand Russian soldiers who died in the World War II battle for the now-divided city.

Prokop, who practiced German at every opportunity during his July tour with the 9th Engr Bn at Aschaffenburg, was delighted when he heard three young men and two girls speaking his third language.

The Czechs were friendly and talkative, confiding that they were sightseeing in East Germany, too.

The young tourists, ranging from 20 to 25 years old, were from a small Czechoslovakian village behind the Iron Curtain and had a dozen questions for the West Pointers.

"They wanted to know why we were in East Berlin and if I really was a soldier or a student," Prokop recounted, "but the first question from the two girls almost threw me.

"One asked me very seriously if I could twist; the other if I'd seen the Beatles when they were in the States.

"I confessed that I'd seen the Liverpool 'beats' — but only on TV," the cadet said.